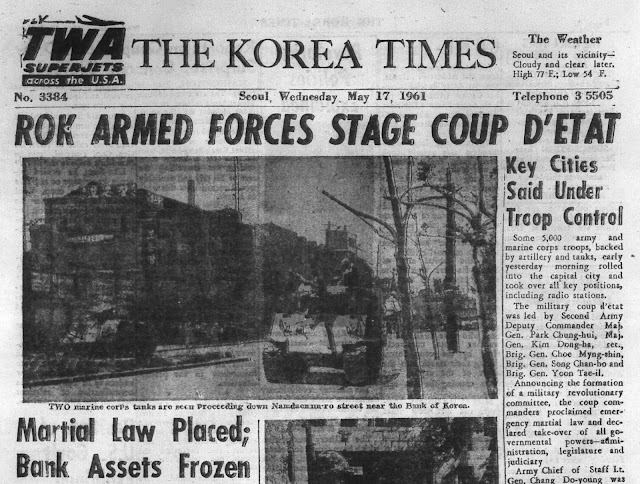 For my latest Korea Times article, "Trying to save a gov't from a coup in 1961," I look at May 16, 1961, when around 4,000 troops led by Park Chung-hee rolled into Seoul and overthrew the government. I had first thought of drawing on Korea Times and Korean-language news articles to write about the coup, but, after reading an article which asserted that the US had initially supported Park's coup - something I knew wasn't true - I decided to see if there were any publicly-available US diplomatic cables from that time. And so I discovered the Foreign Relations Of The United States document collection - something I'd not known about before. Better late than never, I guess. Curated documents from the US embassy in Seoul, the State Department, UN Command, Minister of Defense, the CIA, and more from the time of the coup in 1961 can be found here.

What I discovered from the cables surprised me. As it turned out, it was incredibly easy to overthrow the not-even-a-year-old second republic, but not because the coup had a large number of troops behind them. While First ROK Army Commander Lee Han-lim, UN Commander Carter Magruder, and U.S. Embassy charge d'affaires Marshall Green acted to try to preserve the existing government, no other public figures, including Prime Minister Chang Myon, were willing to take action to save it. As the article notes, Green and Magruder took action without asking Washington for advice, and ultimately were given support for their decision, despite criticism from some US media outlets and certain quarters of the Pentagon. Worth reading is General Magruder's initial report on the coup, and his key follow up report the next day, the White House's response to his actions, the State Department's initial response, its follow-up response, and a CIA report about its foreknowledge of 2 coup plans (which it discussed with the ROK Chief of Staff in late April): Park's and another "led by Yi Pom-sok and members of the Racial Youth Corps" (Yi was the ROK's first Prime Minister and Minister of Defense, and the name of his corps sounds similar to this group, which was supposedly disbanded in 1954).

The coup forces had taken control of the media, so this Korea Times article from May 17 about Green and Magruder's views in support of the government was censored.

A Korea Times article the next day profiled the background of the coup leaders, including Park Chung-hee; mention was made of his Manchukuo Military Academy and Japanese Military Academy background, but obviously not of his past communist ties. 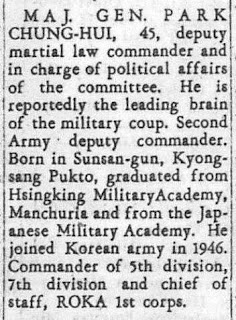 As I worked I the article I decided to see if there were any interesting interviews in this 1364-page-long "Korea" file that is part of the Association for Diplomatic Studies and Training Oral History series of interviews with American diplomats (in this case with those who served in Korea from the 1940s to 1990s). As it turns out, there is a lengthy interview with charge d'affaires Marshall Green starting on page 203 of the pdf. Once I decided to incorporate some of his material, I discovered the story of his meeting with Park Chung-hee, which actually turns out a bit strangely in the end, with Park deciding to befriend him after meeting with him privately in July 1961 to explain his actions and discuss the future (in itself this was odd because he was no longer number one at the embassy at that point). From page 221-222:

I remember leaving that meeting with the impression I had been talking with a man who was deeply motivated. He said at least twice in our conversation that he had staked his life on accomplishing the revolution, and he gave every evidence of really meaning it. Park's most revealing remark of that memorable evening -- during which many bottles of sake were consumed, causing Park to be periodically leaving the room to go you know where -- came as we parted. He turned to me, as he shook hands to say goodbye, and said, "Mr. Green, before leaving, I want you to know that you have done me a great favor."
I was very surprised. I said, "What favor?"
He said, "You made it so difficult for me to pull a coup d'état in this country, that I don't think anybody will ever try it here again. And that is the way I want it to be. You have made it more possible." Of course, I had never really thought of it in those terms, but from his viewpoint, this was really a very telling remark and clearly indicated why he had confidence in me. It was because I had opposed him or anybody else who might suddenly seize power. Now he had confidence in a man like me or my government. Once he was in power, he saw it from an entirely different perspective! That's why, basically, he wanted to have that long meeting with me. It is in that last final remark.
I am confirmed in that view because over the next several weeks, he asked me out several times to go to one of these [kisaeng] houses for dinner and watching dances and things like that. It was really rather baffling as to why he asked me out, because he spoke no English and I spoke no Korean. I don't even recall we had an interpreter, or if we did, he wasn't used very much. Because Park just wanted to sit down there in my company and watch the dances and drink saki and be friends. I really got the feeling that the man liked me, and I had come to like him. A strange kind of chemical process that one cannot explain.
This is to be borne out, if I can leap ahead in history, by the fact that after I left Korea, he wrote to me at least once a year. He frequently urged me to visit Korea. In fact, he urged me to do so when I was assigned as Ambassador to Australia in 1973, and I did stop in Korea to visit him, obviously at my expense -- not Korea's expense. But we did establish a kind of rapport between two people who had been at one time at loggerheads.

General Magruder may not have had such friendly relations with Park and his group, and he retired after his assignment in Korea. In his book Korea on the Brink, General John Wickham described his first meeting with Chun Doo-hwan in February 1980, some two months after his December 12, 1979 coup within the armed forces. As Wickham described it (on page 115),

In preparation for this meeting, Steve Bradner gave me a remarkable memorandum of conversation (memcon) between a former CINC, General Carter Magruder, and Lieutenant Colonel Kim Jong-pil. The latter, as mentioned earlier, had been the mastermind behind the coup staged in May 1961. It was not clear whether Kim had been summoned by Magruder or had come of his own volition. In any event Kim was there to explain the actions of the coup leaders, including Major General Park Chung-hee, who eventually dominated the coup group and became president. A feeling of deja vu came over me as I read the memcon; virtually all of the reasons given for the coup in 1961 were reflected in what Chun and his associates said about their actions.
In the conversation, Kim apologized to Magruder for violating the chain of command by using ROK forces without CINC authority. Kim respectfully explained that the coup leaders had no political goals; their actions were to oust the corrupt, aging military leaders who blocked promotion opportunities of more able officers, and to "clean up" the government, which had grown so inefficient and corrupt that the people were not well served. Kim assured Magruder that after he and his associates had achieved their limited objectives, they would return promptly to the barracks. "Trust us" said Kim. The thought crossed my mind that I could change the date of Magruder's memcon and use it as a record of my discussion with Chun.