"The Man Standing Next" is Korea's 2021 Oscars submission?

UPI reports on Korea's submission to the Oscars for this year: "The Man Standing Next" (남산의 부장들), which, as the Korea Herald put it before its release early last year, "offers what its creators say is a faithful depiction of the 40 days leading up to [president Park Chung-hee's] death." The film even ends by explaining the fallout from Park's assassination as historical photos are shown, and has the sound of what is presumably the real Kim Jae-gyu speaking at his trial. 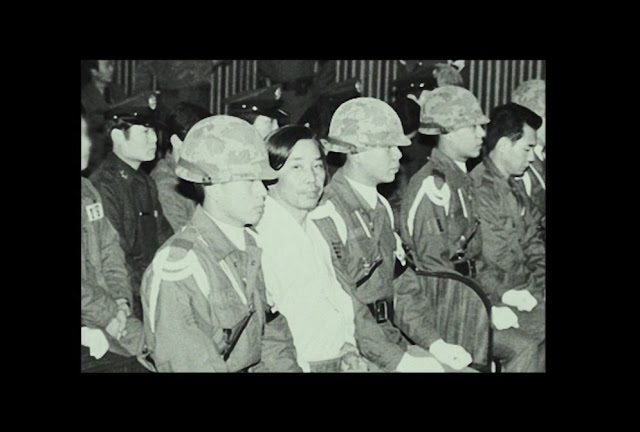 I found it hard to judge the film on its merits as entertainment because as a depiction of history it's terrible beyond belief. It basically takes historical events from throughout the latter half of the 1970s (particularly Koreagate, as well as US electronic surveillance of the Blue House and the murder of former KCIA head Kim Hyung-wook in Paris) and pretends they happened in the 40 days before Park's murder in order to weave a false narrative arguing that the US ordered Park's death. There is a scene in which the US ambassador (who looks nothing like William Gleysteen) practically orders Kim Jae-gyu to take Park out: 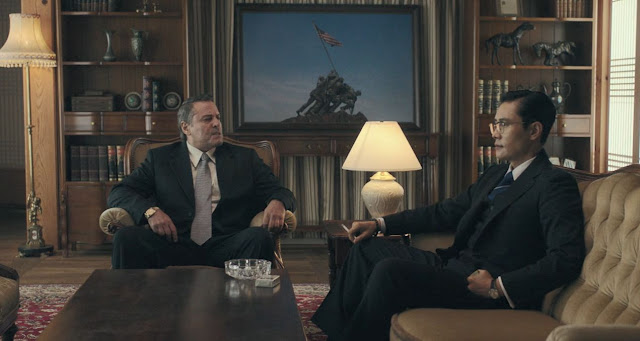 US Ambassador: “You leave me with no choice but to withdraw the U.S. troops from Korea. What will you do then?”
KCIA head Kim: “Then what!? What is that you want from me!?”
US Ambassador: “Prepare for the next step. Before we have to intervene. Park is finished.”
I guess this scene works if we forget that practically no one in the US government, other than President Carter and a few people surrounding him, agreed with his plan to withdraw troops from Korea. As well, the idea that the ambassador has the power to unilaterally pull the troops out is laughable. (And let's not go into how this unfolds like so many post-2000 Korean "historical" films in which Koreans are portrayed as having no agency and are only victims of outside powers or bystanders as history washes over them.) I honestly felt stupider every moment I watched this movie. It was like sitting through a film about the US Civil War in which the British ambassador, wanting a steady supply of cheap cotton, orders John Wilkes Booth to kill President Lincoln: "Don't make me order the Hessians to do it."
The story of Park's assassination was also told in the film "President's Last Bang" (그때 그사람들) in 2005. Years ago the Chosun Ilbo had Cho Gap-je's biography of Park Chung-hee, "Spit on my grave," serialized in translation on their English site, and he based the sections about Park's assassination on the court records, if I recall correctly, and the events depicted in 'President's Last Bang' hewed very closely to what was in "Spit on my grave," but with more of a satirical edge to them. In fact, the film's director, Im Sang-soo, even said he used those court records, but added that he was a better storyteller than the judge. "The Man Standing Next," with its compression of time and angry American Ambassador ordering assassinations, is a fantasy in comparison.
Mind you, in former Ambassador William H. Gleysteen's chapter "Korea: A Special Target of American Concern" (in the book The Diplomacy of Human Rights, David D. Newsom, ed. (University Press of America, 1986)), he argued that the US may have inadvertently played a role in Park Chung-hee's death. In return for the expectation that President Carter would cancel his plans to withdraw US troops from Korea, on the occasion of Carter's 1979 visit to Seoul Park Chung-hee freed a number of dissidents arrested under Emergency Measure 9. This was in response to Carter's focus on human rights, which had resulted in a steady drumbeat of criticism of the Park regime over the previous few years. As Gleysteen continues:

But the period of relaxation was brief. Within months, political, labor and student problems boiled up, and President Park lost his grip to the point that his confidant, KCIA Director Kim Jae Kyu, seemed convinced - quite wrongly - the nation would welcome his bloody assassination of Park on October 26. At a minimum, the apparent gains we achieved were short-lived. Debatably, we also helped set the scenario Park always feared. Partly because of their conviction that a new era of U.S. support had dawned under Carter, opposition political leaders, labor unionists, religious dissidents, and students adopted more confrontational tactics on the assumption that they would have U.S. support. Fed by confrontation and other volatile factors, events spiralled tragically out of control.

He concluded that "the sum total of...U.S. actions on the human rights front may have unwittingly contributed to President Park's fall and the unhappy chain of subsequent events."
Of course, depicting bad outcomes from good intentions is obviously too complex for this "political thriller" depicting Park's last days before the US ordered a hit on him.
In somewhat related news, renovations of the former KCIA headquarters near Namsan (hence the Korean title of "The Man Standing Next") are nearly complete. According to articles here and here, the former KCIA HQ has been demolished except for the basement, where the torture rooms have been preserved. This area just opened as a museum this month, and the rest of the area will become "Human Rights Plaza" by this May. For those who are curious where exactly this is, if you enter 남산예장자락 보행공원 into a map, you'll get the location.
Posted by matt at 12:16 AM

"I honestly felt stupider every moment I watched this movie."

You had me lol at this wonderfully insightful review. Thank you!