Today marks the 40th anniversary of the Gwangju Uprising. As well, it was 15 years ago yesterday that I first published a post on this blog, though the main reason for starting the blog was to write these two posts about the Gwangju Uprising. Obviously, my interest in the uprising has been expressed on many occasions on this blog; last year's post has links to my writing here on the topic.

The first journal article about the uprising was published in 1987 by Tim Warnberg, a Peace Corps Volunteer [PCV] who was in Gwangju during the uprising. He was one of several PCVs who were active there. I've known former PCV David Dolinger for years, and am currently working with him on his memoir. I met Paul Courtright last year, and his memoir 'Witnessing Gwangju' was released earlier this month. He gave a talk for the RAS recorded on zoom last week that can be watched here (the lecture begins at 7:15).

If the role the Peace Corps played during the uprising was not so well known in the past, that certainly is not true this year. In addition to Courtright's memoir, Ohmynews has published a number of articles about the Peace Corps volunteers over the past week. There are two articles about Tim Warnberg, who had photos taken of him helping carry injured people on a stretcher, one about Paul Courtright, another about the testimony of PCVs who were in Gwangju, including Dolinger, Courtright, Don Baker, and Bill Amos (author of 'Seed of Joy'), and another showcasing the photos taken by the aforementioned PCVs. There is also an article about PCVs Steven Hunziker and Carolyn Turbyfill, who, filled in on the events of 5.18 by Dolinger and Warnberg, and given photos taken by Dolinger, went to Sweden and spoke to newspapers about the truth of the uprising, much to the chagrin of the Korean government. As this article points out, this may have played a role in the end of the Peace Corps program in Korea a year later. There is also a profile of 5.18 Democratization Movement Truth Commission Chief Investigator Choi Yongju, who has examined foreign accounts of 5.18 and talks about the PCVs testimony. He has also interviewed many Americans about 5.18, including, he told me, General Wickham and James Young ('Eye on Korea'), and translated Courtright's book into Korean. (The article notes he was on the run for five months after May 18 and served almost three months in prison.)

One photo that appears in many of those articles is this one: 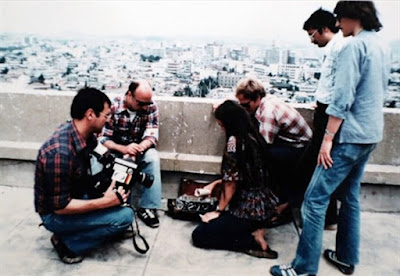 I learned last year that Jurgen Hinzpeter, the German cameraman whose story was portrayed in the 2017 film 'A Taxi Driver,' had actually interviewed Tim Warnberg on the roof of Chonnam University Hospital. In his account he mentioned interviewing Americans from 'Amnesty International,' which confused me, but I eventually realized that he was referring to the PCVs. (David Dolinger told me it was to protect their identities.) What tipped me off was discovering the above photo in this article (which has photos of his 'taxi driver,' Kim Sa-bok) and realizing the four on the right were the PCVs, along with Hinzpeter (far left) and his assistant. No one had made that connection before, so it's neat to see something I discovered now being published in various articles.

Another photo I found in this article, which is featured in Paul Courtright's book and was taken by Robin Moyer of Time, is interesting because it shows the two floors of spectators in the gymnasium where the coffins were displayed, something I'd never seen before. 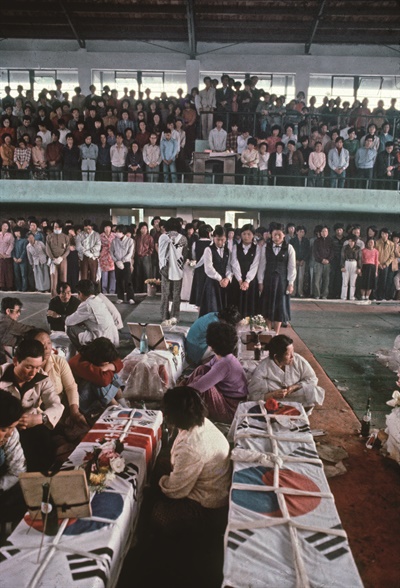 But even more interesting were the three school girls. In this post about my attempts to discover what had happened to a high school girl named Park Geum-hui killed in the uprising, I quoted German journalist Gebhard Hielscher's experience in the Gymnasium:


In the next row a group of young girls has gathered. They are students of Shuntae Economic High School in Kwangju. They still cannot comprehend that one of their classmates is lying dead before them. Their voices choked in tears, the girls sing a farewell song. Then one of them turns around and, facing the people of the platform, makes a dramatic appeal: 17 year old Park Keun Hee shall not have died in vain. At the end everybody in the hall starts singing South Korea's national anthem. "Long live the Republic of Korea, long live democracy."

I can't help wonder if this is a photo of that moment, or at least a similar one. I'm almost certain it's her coffin they're standing in front of though; here's another photo of her coffin from the front, at far left. 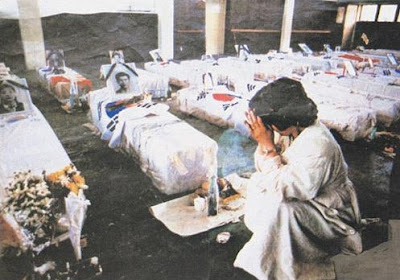 From the front of her coffin, the left hand side has yellow carpeting in both photos, and in both you can see a chrysanthemum behind the photo. From the photo below it seems there would only be one place on the floor with that line of yellow carpeting. 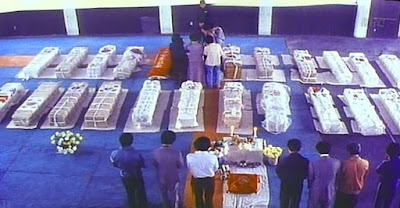 At any rate, it was interesting to find another part of her story, in visual form, after all these years.

Another recently published book is "제니의 다락방" (Jenny's Attic), "The blue-eyed girl Jennifer's story of Gwangju in May 1980," by Jennifer Huntley, daughter of Charles Betts and Martha Huntley, who were missionaries living with the Underwoods and Petersons on a compound in Yangnim-dong, just south of the city center. Betts Huntley worked at Gwangju Christian Hospital and photographed the mangled bodies of people who had been beaten to death or shot by the military, and developed them in his home darkroom, while Arnold Peterson photographed and wrote about the helicopters firing into crowds. Photos of both were used at Chun's trial in 1996, one reason Chun called Peterson and priest Cho Bi-oh a 'Satan' in his 2017 memoir, and the reason Chun is on trial now (for defaming Cho). When three National Assembly members declared last year that North Korean agents were responsible for 5.18, Martha Huntley and Barbara Peterson wrote a letter to the Speaker of the National Assembly criticizing them.

In a recent Hankyoreh article [Update - now in English], Jennifer, who was ten in 1980, recalled that "I saw the helicopters with my own eyes and heard the shooting with my own ears." The title of the book comes from the students the missionaries hid in their houses. On May 20 rumors that soldiers would do house to house searches and kill the students they found led to many of their Korean friends bringing their sons to the compound to hide them. Martha Huntley recalled to me that they had 22 people in their house at one point, and as Barbara Peterson recently wrote, "I think of the scared students who stayed in our home and the other homes on the compounds the night that the soldiers were supposedly going house to house taking students. I am amazed that they did not storm the compound looking for students that night." 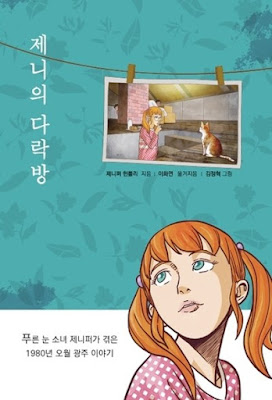 Brother Anthony has posted a collection of translated poems about the Gwangju Uprising.

Several stories published by the Hankyoreh include one highlighting the effects of the ongoing psychological trauma related to the events of the uprising, the story of the effect serving in a unit of the 20th Division sent to Gwangju on May 27 had on one of the soldiers, the story of a teacher who refused to let his students leave to join the protests, and the story of a woman whose husband was shot and killed and then, after placing her children temporarily in an orphanage, found out they'd been adopted abroad and never saw them again.

Last week President Moon said that if revising the Constitution is discussed again, the spirit of the movement should be reflected in the preamble (much as the Samil Movement and the April 1960 Student Uprising are included in the current preamble). He apparently said that this would be a way to promote national unity and pointed out that the Gwangju Uprising is at the center of the country's democratization. The problems with this are 1) I don't think many people would have disagreed with the spirit of 3.1 and 4.19 being included in the 1988 Constitution, but 2) many conservatives here would disagree with 5.18 being so included 3) so Moon's assertion that it would be a way to promote national unity is disingenuous at best, and a way to ram his (and his party's) historical viewpoint down the throats of his political opponents at worst, and 4) I don't think the state should be in the business of deciding what historical truth is - even if I disagree vigorously with the conservative take on what happened 40 years ago. Leave history to the historians. Korea has already experienced one government that tried, in the 1980s, to control the narrative around 5.18 so as to promote its own point of view on what happened. Does it really need that to happen again?

I should note momentarily that conservatives tend to push the second of three 'big lies' Chun Doo-hwan put forward about 5.18, namely that it was hooligans and 'impure elements' (North Korean agents) who led the uprising. The third lie was the amending of that story to blame it all on Kim Dae-jung, sentence him with death, and use this to get an early visit to the White House in exchange for sparing Kim's life. The earliest of the big lies, however, was having KBS broadcast into Gwangju days into the uprising that General Wickham had approved, or even had sent the soldiers into Gwangju on May 18 (quite a feat for a man who'd been out of the country for four days by that point!). It's fascinating that for different reasons progressives in the ROK and US champion Chun's first lie, while conservatives in the ROK stand behind Chun's second lie. Amid the arguments between the two sides, Chun laughs all the way to the bank (with only $200 in it, of course), what with both progressives and conservatives pushing narratives that take at least some of the blame off of him, where it should belong.

Here are some new additions I've made to my Gwangu Uprising bibliography:

In 1997 the Gwangju May 18 Historical Materials Compilation Committee released volumes 6 to 10 of the May 18 Gwangju Democratization Movement Materials which contain the entire collection of unclassified cables sent between the US Embassy in Seoul and the State Department in Washington DC, which total around 3,700 pages. They can be found online (pages can be downloaded to be read at full size):

The US government recently released fully-uncensored versions of 43 these cables; they can be downloaded here. 문서 목록.pdf  is the table of contents, while 미측 기록물(43건).pdf contains the cables.

Another addition coming soon will be my own article, "'Tell the World What is Happening': The Americans Who Witnessed the Kwangju Uprising," which will be published in this year's Transactions, the journal of the Royal Asiatic Society - Korea Branch.
Posted by matt at 11:57 PM