My latest Korea Encounters article in the Korea Times focuses on avant-garde art, particularly body-painting, in the late 1960s and 1970. Since an article on the 2018 Daegu International Bodypainting Festival was to be published on the same page, I was encouraged to write about an aspect of 1960s youth culture that might otherwise raise editorial eyebrows. For more information on avant-garde art in Korea at that time, do read  Kim Mi Kyung's article "Expressions without Freedom: Korean Experimental Art in the 1960s and 1970s." (This article is also worth reading.)

Below are some of the images from Sunday Seoul and Weekly Kyonghyang referred to in my article. As those weekly magazines tended to publish nude photos before mid-1970, I'm not posting everything I referred to, just some of the more subdued photos. 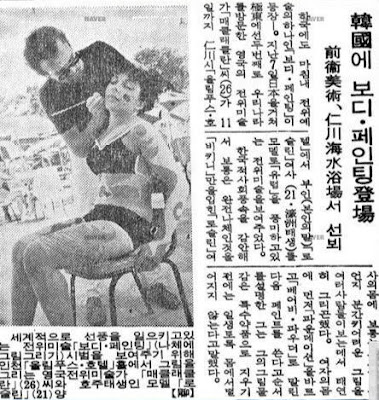 Though first, above is the Kyonghyang Shinmun article "Body painting enters Korea," August 12, 1968. 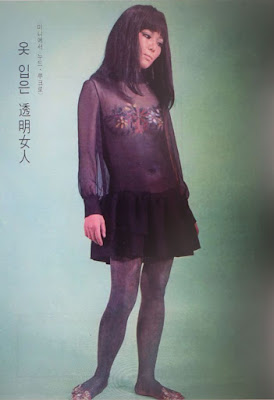 A spread of black and white photos of Jeong Gang-ja having her body painted highlighted her nudity, which is covered (mostly) by a partly see-through dress in this colour photo. From Sunday Seoul, November 17, 1968. 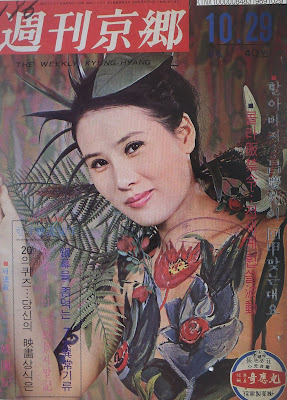 TV actress Kim Yun-hui apparently topless and covered in body paint on the cover of the Weekly Kyunghyang, October 29, 1969. 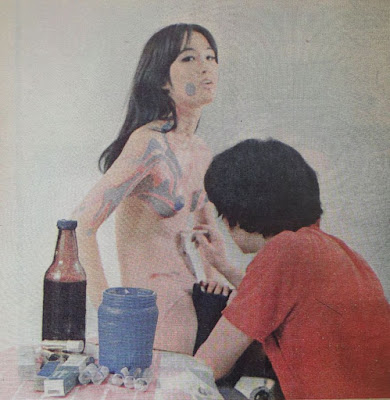 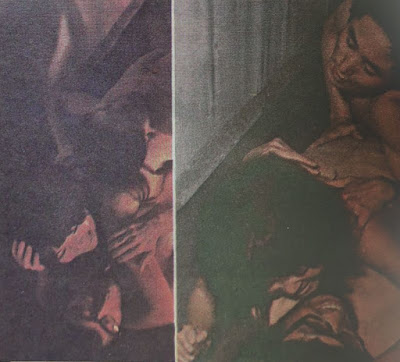 Jeong Gang-ja and her compatriots entangled while nude amid fog and coloured lights at a rehearsal only Sunday Seoul was present for, and which was never repeated, which left the reporter wondering whether the term "experimental" was "just a prank." The inclusion of "bodypainting nude shows, avant-garde drama which shows sexual acts performed in the streets, and avant-garde clothing involving excessive exposure" being included in the list of targets in a crackdown on youth culture in late August 1970 may well have resulted from this article, published in Sunday Seoul on August 23, 1970. 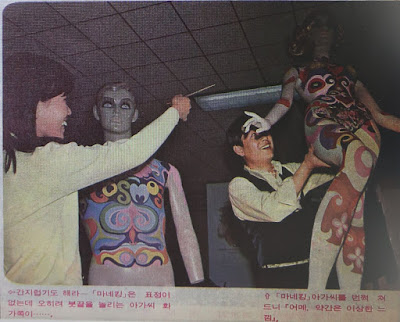 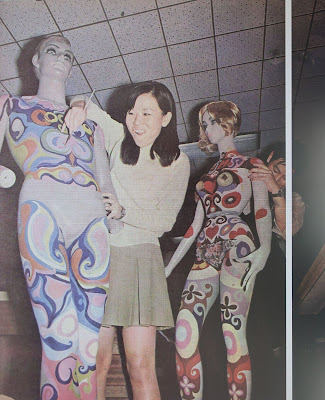 As a result of the crackdown photos of nude women being body-painted disappeared from the magazines, though nude mannequins were apparently okay. From Sunday Seoul, November 22, 1970. 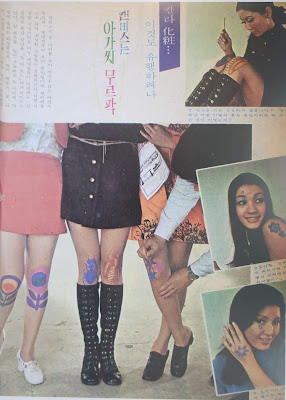 These more subdued photos of women in body paint with a limited amount of body paint reflected the less-permissive post-crackdown era. From Sunday Seoul, April 14, 1971.

To make up for the disappearance of nude centerfolds and photos by May 1970, Sunday Seoul must have begun its "Sunday Gallery" feature when it realized nude paintings of women were not banned. Most were by Korean painters, some who were famous, such as this colonial era painting by Na Hye-seok. 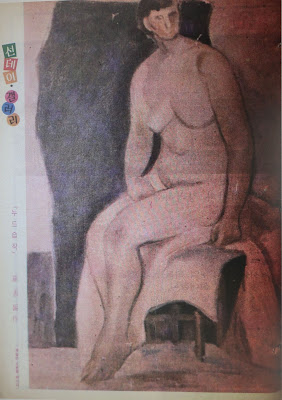 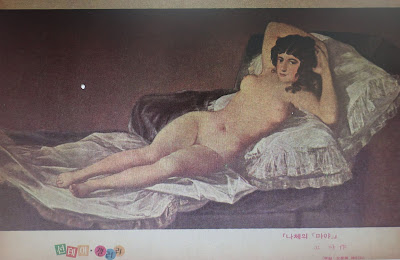 When I first read about the different aspects of avant-garde art being targeted in the 1970 crackdown, I assumed the government was exaggerating, especially considering how few artists were arrested (perhaps one or two). It wasn't until I discovered these newspaper weeklies that I realized what had set the government off in this regard (though almost all of the 4000+ people detained were men caught for wearing their hair long).
Posted by matt at 5:35 PM