In the wake of the Ministry of Justice announcing that it would no longer require HIV tests for foreign instructors, (reported in the Korean language media as being due to "controversy over discrimination"), a Christian group known as Anti-Homosexuality Christian Citizens' Solidarity has released a statement condemning the Ministry for endangering the nation and reverse discrimination. As the Korea Times put it,


The Christian group condemns homosexuality and believes that Christians must unite against homosexuality. It supports Christian anti-homosexual movement organizations, recruits and trains "young patriotic" vanguard troops and seeks strategic countermeasures to stop homosexuality, according to its website.

That website is http://www.antihomo.net, in case you were wondering. That such an anti-gay group would be concerned with AIDS is not surprising considering the link made between homosexuality and AIDS in the literature of the Christian groups who have picketed Pride celebrations for the past few years. One might get the idea from the Times coverage that this group speaks for a large group of people, but that would be mistaken. The message from its representative Pastor Ju Yo-sep - the same Pastor Ju Yo-sep who left a ranting comment on the Yonhap piece - appears only in the Gidok Ilbo [Christian Daily], and has not been referred to in any other articles (other than the Korea Times), as far as I can tell. Here is the article he wrote for the Gidok Ilbo on July 10:


[AHCCS Statement] The Ministry of Justice must immediately retract its halting of mandatory AIDS tests for foreign conversation instructors. 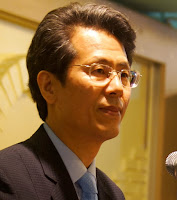 At present, the Justice Department has a disordered atmosphere with the appointed minister candidate having voluntarily resigned and the confirmation hearing for the new minister candidate yet to take place. In such a [state], the Ministry of Justice announced on July 8 a dangerous policy that runs counter to the protection of citizens’ health and the national interests of the Republic of Korea, that it had abolished the AIDS tests which had been mandatory up until now for native-speaking conversation instructors, in accordance with the demands of the UN Committee on the Eradication of Racial Discrimination and the recommendation of the National Human Rights Commission. The majority of citizens who hear this news are astonished. How can this crucial issue be decided by some public officials without public consent?

This is clearly a socialist idea, a serious issue that infringes upon people's right to health and right to know, and should be withdrawn and [the AIDS test should be] reverted back to because it is an erroneous decision arising from a distorted sense of discrimination that causes reverse discrimination. It is shocking and unbelievable that the Ministry of Justice, a central administrative agency that oversees prosecutors, the penal [system], human rights protection, immigration control, and other judicial affairs, has made such an anti-human rights and anti-citizen decision that infringes on the human rights of the majority in order to protect the human rights of a small minority. Why should the majority of citizens suffer from reverse discrimination at the hands of the state?

AIDS is a legally[defined] infectious disease caused by infection with HIV (Human Immunodeficiency Virus), and is classified with the third group of infectious diseases in article 2 (1) of the “Prevention and Management of Infectious Diseases Act” which includes malaria, tuberculosis, Vibrio Vulnificus Septicemia, influenza, and syphilis. However, it is doubtful whether a dangerous infected person with something like AIDS can be kept secret on that basis. This cannot but be questioned as a decision made through an obviously wrong political judgment.

As a result of problems with foreign conversation instructors such as drugs appearing many times in the media, public opinion worsened and so immigration enforcement measures made it so medical certificates (for syphilis*, drugs, AIDS) were to be included for the E-2 visa, but I cannot understand why the AIDS provision alone was excluded. On the same basis, if a syphilis carrier or drug addict raises an objection that they are discriminated against and request that [the test] be removed, how should that be dealt with? AIDS, like syphilis and drugs, spreads in secret easily, and is a dangerous disease that can directly affect the people, so it is necessary to explain in detail why AIDS alone is treated as a special case, and if it is unreasonable, it should naturally be withdrawn.

In some media [reports], the health rights of the Korean people were threatened, and even though there was great concern about the spread of AIDS, embarrassment was felt about the mandatory AIDS test for foreign conversation instructors, and they forecast problems with labor survival and from the purebloodism and violation of reciprocity which go against globalization, and articles agreeing with this were published, but what nation’s media is so deplorable and shocking? I would like to ask again what kind of benefits would come to the Republic of Korea if we really abolish the mandatory AIDS test for foreign instructors. It is just dumbfounding how much it was decided to ruin and corrupt Korea. At present, I don’t know if a lot of the national budget is paid to cover the cost of treatment for AIDS patients, or if it cannot be interpreted as a complaint of an idealist who deliberately looks away.

Which country officials are the officials of the Justice Department? Now, with the position of the Minister of Justice vacant and a candidate yet to go through a confirmation hearing, we should ask why the Ministry of Justice decided on such an important policy in a hurry and sternly find out who is responsible. At this time the nation’s citizens have realized just how indifferent the Ministry of Justice, along with the National Human Rights Commission, is to the protection of the health of its own citizens and how it has neglected and encouraged AIDS infection. The Ministry of Justice should see this as an opportunity to become aware of this and make the utmost effort [to rectify it].

As the treatment costs for AIDS patients are covered in full by the government, it is paid out from the astronomical national budget, but who will be responsible for the cost of medical care and nursing care if a Korean is infected through sexual contact with a foreign AIDS conversation instructor?** Why is the Ministry of Justice abandoning its duty and irresponsibly making an exemption of the mandatory test? In this way, how can the Ministry of Justice fortify and protect the citizens’ human rights, protect citizens’ right to health, and protect the safety of many students and hagwon attendees?

We hope the Ministry of Justice will come to its senses and immediately retract its abandoning of the mandatory AIDS test for foreign conversation instructors and bear in mind that this path is the only way to recover damaged public trust.

There's so much wrong here it's hard to know where to start. Suffice it to say that the idea that HIV spreads easily is wrong, and the idea that parents should be suspicious of foreign teachers because their children might catch it from the teachers helps to contribute to fear and ignorance surrounding HIV/AIDS in Korea (not to mention contributing to suspicion of foreigners; as always such articles have a prescriptive quality to them). What confuses me is that Christians who seem to take offense at North Koreans being abused by their government (ie human rights abuses) also take offense at the concept of rights being applied to their own country (rights, I should add, that Christians, among others, fought for during the democracy movement). This obviously reeks of "rights for me (or my pet causes) but not for thee," and probably has more to do with the feeling of it being imposed from without (again, see some of their writing here). Of course, such ideas have not been imposed from outside - they need only read something like "When a foreigner resides among you in your land, do not mistreat them. The foreigner residing among you must be treated as your native-born. Love them as yourself, for you were foreigners in Egypt." (Leviticus 19:33-34)***

In the end, I'm less concerned about this odd postscript to the doing away of the E-2 HIV testing regime in the form of the rantings of homophobic Christians as it applies to foreign teachers than I am about how such intolerance contributes to the hardship faced by Koreans living with HIV/AIDS and the Korean LGBT community.

* It's odd how syphilis got included in all of this. It was not included in the original health checks that began in 2007, but was mandated in the 2011 MoJ notice on E-2 health checks and appeared on future checks (at least the ones I took). Reading Yonhap's article or the ranting above makes it sound like it was part of the original testing regime, but it wasn't, and was added with little fanfare in 2011.

** I decided to render "foreign AIDS conversation instructor" as it was written: 외국인 에이즈회화강사. He's either not the best of writers or is deliberately writing in a smear-y way that makes the Anti-English Spectrum folks look measured in comparison (and the fact that nothing about the doing away with of the HIV tests has appeared on AES's site shows just how dead that site is).

***The Biblical quote is from Gil-Soo Han's Nouveau-riche Nationalism and Multiculturalism in Korea (New York: Routledge, 2016).
Posted by matt at 5:11 PM