Portrait of the ex-president as a young woman

And so President Park has been impeached and an election is to follow. Interesting times, to say the least. As I'm researching the crackdown on youth culture during the mid-1970s by her father (which resulted in over 50 musicians, film directors, actors, and other artists being banned from performing for life for smoking marijuana), the Park Geun-hye administration's massive artist blacklist certainly seemed familiar, though, of course, that was only the tip of the iceberg.

Oddly, it was just the other night I came across these images of Korea Herald articles from 1975 that include two articles about the now ex-president which might be of interest. One mentions her first press conference as first-lady, when she was a "shy" and "bashful" 23-year-old, where she speaks of her hopes for private life included wanting "to have a small house in the bright sunshine." As she put it, "At the sunny house, I would love to wait for friends, making tea and cake. And also it would be very nice to have enough time to read." There seems to be more than just a little whiff of the tragic in all of this.

Also, it's a bit eerie how she almost looks the same now as she did then.

Just in case these open in the photo viewer, the links to the images are here and here. 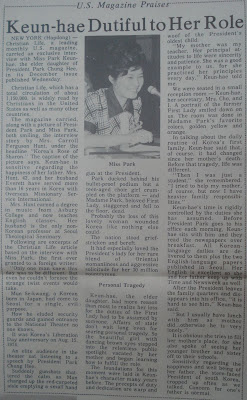 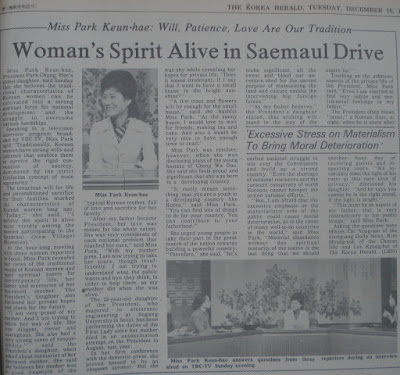