We got leaflets printed in Chungmuro and from the Danseongsa Building at Jongno 3-ga to the Seun Sangga [we distributed them] around the jewelry shopping area and to street vendors and passers by...
In the Jonggak area we distributed them even to the information desks of leading English hagwons...
We moved to Myeong-dong and carried out the campaign on the streets of Myeong-dong.

Who knows, there may even be a member here who joined after receiving one of the leaflets.
We didn't take many photos.
We made 4,000 leaflets and distributed around 1,500 or 1,600.

Well done, everyone - thank you members.

The post also includes photos of three different members handing out leaflets, with the top one taken at the Jongno 3-ga intersection; the one in the beige parka in the top photo would likely be AES founder Ballyuchi, pictured here in an MBC interview three weeks earlier. 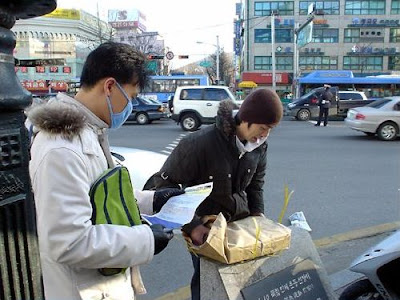 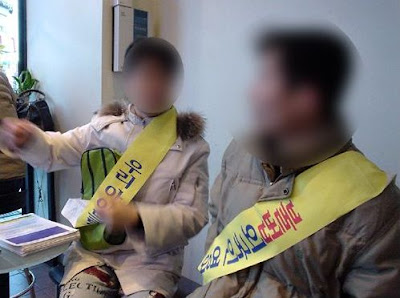 The sashes are obscured but from other photos it seems they say "Expel illegal foreign English instructors" on one side and "Protect our children" on the other. 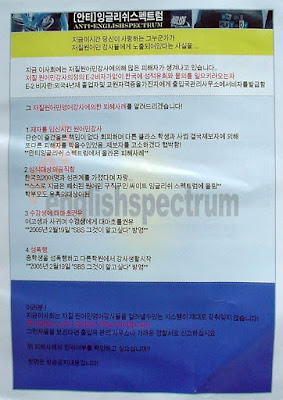 
I've put in italics below the sections of the leaflet printed in red.

The fact is that at this moment someone you love is being exposed to low-quality native-speaking instructors...

Right now in this society many people are becoming victims of low-quality native-speaking instructors.
The definition of a low-quality native-speaking instructor: Those coming to Korea without E-2 visas for the purpose of engaging in sexual pleasures and to create trouble.
E-2 visas: A visa issued by the immigration office to those who have a four-year university degree or teaching credentials.

Let us alert you to cases of victimization by these low-quality native-speaking instructors!

1. A native-speaking instructor who got a student pregnant
He dated a student in another class for simple enjoyment and with no responsibility evaded her, and in the end the informant wanted to stop other victims [from suffering], but he threatened the informant saying he would charge them!
**A case of victimization at Anti English Spectrum.**

2. The horrors of [becoming] sex objects
Boasts of having sex with 20 Korean women...
**Written by poster himself at the native-speaker job site English Spectrum, which is now closed down.**
Also seduced students' mothers.

4. Sexual assault
Sexually assaulted a middle school girl and started working as an instructor at another hagwon.
**Broadcast on SBS's 'I Want to Know That' February 19, 2005.**

Right now our society has no system properly put in place to filter out low-quality native-speaking instructors!
Ladies and gentlemen, you yourselves must be vigilant and expel them!!!
If you see these people please report them to the immigration office or the nearest police station.

Would you like to confirm whether the above cases of victimization are true?
On the reverse side are the contents of the broadcast!


The reverse side of the leaflet reads as follows: 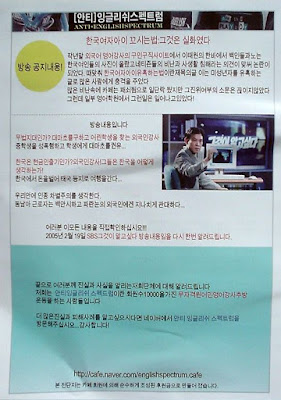 How to pick up young Korean girls: The real story

At the end of last year photos of white people frolicking with Korean women at a bar in Itaewon were uploaded at an employment site for foreign language English instructors, causing controversy when netizens criticized this and put forward the view that [the photos] invaded privacy. At the same time many people were shocked by a post titled 'How to seduce young Korean girls' about seducing minors.
Amid this criticism the cafe closed down, finishing things, but rumors wondering whether it was true never stopped. However, at some English hagwons things like this are happening!

What was disclosed on the broadcast:


This is what was broadcast:

Is this a lawless zone? Foreign instructors who buy marijuana and look for young students.
Sexually assaulting a middle school girl and giving marijuana to students...

Is Korea an ATM? Foreign instructors! How do you think about Korea?
They earn money in Korea and take trips to Thailand...

Think about the racial discrimination within ourselves.
We look coldly upon migrant workers from Southeast Asia but are excessively lenient towards blue-eyed foreigners...

Ladies and Gentlemen, please confirm all of these things directly!!!
Watch the February 19, 2005 broadcast of SBS's "I Want to Know That" once more.

Finally, ladies and gentlemen, let us tell you about ourselves, who made known these facts.
We are Anti English Spectrum, we have 10,000 members and we are a movement to expel unqualified native speaking English instructors.


http://cafe.naver.com/englishspectrum.cafe
This leaflet was made from genuinely-given donations made by cafe members.

This leaflet gives both a snapshot of how Anti English Spectrum members were thinking about the foreign teacher 'problem' at the time and a glimpse at their future actions. Fear-mongering was a constant throughout the time the group was active, and it's obvious here with the opening sentence of the leaflet, which warns that "at this moment someone you love is being exposed to low-quality native-speaking instructors." The use of 'exposed' would recur a year-and-a-half later in the BreakNews article connecting foreign teachers to AIDS, when it was asserted that Korean "women [who had sex with foreign teachers] are being defenselessly exposed to AIDS." Mind you, that formulation of "defenseless" exposure in regard to AIDS has a longer pedigree, going back to the 1988 Olympics.

Related to the descriptions of being defenseless are the assertions that Koreans were being victimized by foreign teachers (or foreigners in general), a common theme in nationalist historiography. "Right now in this society many people are becoming victims of low-quality native-speaking instructors." "Let us alert you to cases of victimization by these low-quality native-speaking instructors!" "Would you like to confirm whether the above cases of victimization are true? On the reverse side are the contents of the broadcast!"

That last sentence reveals that Anti English Spectrum's modus operandi - of getting tips online (or possibly through their telephone hotline), feeding them to the media, and then using the media reports they contributed to as evidence in propaganda materials or petitions to the government - was already established at this point (the stalking in order to obtain proof would come later, it seems). As it's put on the leaflet, "Ladies and Gentlemen, please confirm all of these things directly!!! Watch the February 19, 2005 broadcast of SBS's "I Want to Know That" once more." As their list of achievements describes it, they "Participated in shooting reports on English teachers" for the current affairs program MBC 2580 (and in fact appeared in it) at the end of January and "Fully participated and joined in on the coverage of SBS’s 'I Want To Know That,' 'Blond and Blue-eyed English Teachers.'"

Not only did appearances on the TV shows (and other forms of publicity like the leaflets) attempt to increase the audience for their views, they also highlighted the existence of the group and attempted to recruit new members. As Anti English Spectrum's leader wrote in the post above at the site, "Who knows, there may even be a member here who joined after receiving one of the leaflets." As the leaflet reads:


Finally, ladies and gentlemen, let us tell you about ourselves, who made known these facts. We are Anti English Spectrum, we have 10,000 members and we are a movement to expel unqualified native speaking English instructors.

In comparison to illegal foreign instructors ("Is Korea an ATM? Foreign instructors! How do you think about Korea?"), members of the site are "genuine" and presumably good-hearted people; hence the "genuinely-given donations" which made the leaflets possible.

There's more to say about this pamphlet and what it said about Anti English Spectrum's future direction; I'll save that for the next and final post of this series.
Posted by matt at 3:22 PM

jeez, a classic example of a potentially dangerous 'gust of popular feeling' being whipped up along the lines of the recent Park protests in downtown Seoul. Albeit with much less funding and organization!
Koreans do seem to lack national debating mechanisms, and the 'popular gusts' which blow forth (bloviate forth?) in their place are so obviously being whipped up by very clever, Bernaysian-like techniques. I say this because every single Korean person I speak to is listing the same 'rap-sheet' of disdain, almost to the word, that's currently making the rounds against Ms. Park on the nightly news.
Political views, and rights and wrongs aside, I think it's effing scary. People here seem incapable of reaching their own conclusions regarding very serious issues of national concern. Is there really a democracy here, at all? I wonder~