At least one 'native speaking teacher' was arrested for smuggling and taking meth last week. Newsis, which published an article that likely has the most information, reports: 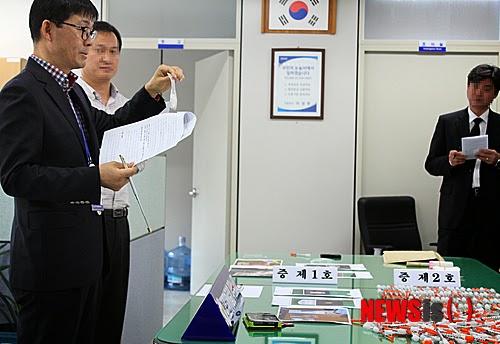 [The Daejeon regional police drug investigation unit held a briefing on April second about 11 people including a native speaking English instructor from Gyeonggi-do arrested for taking and smuggling methamphetamine.]

Police caught a group of offenders, including a native speaking English instructor who taught middle and high school students, for the illegal smuggling, selling and taking of methamphetamine.

On April 2 the Daejeon regional police drug investigation unit arrested five people including native speaking English instructor Mr. Choi (39) for bringing methamphetamine from overseas and selling and taking it, in contravention of the drug control law, and booked without detention six people including Mr. Kim (50) who only took the drug.

According to police, Mr. Choi is suspected of meeting a Thai tour guide in the vicinity of Incheon Airport on January 14 at 8:00 in the morning and buying a gram of meth from him for 400,000 won and both taking it and reselling it.

The police investigation found that because Mr. Choi knew that tour guides have simplified customs procedures, he wanted to exploit this and coaxed A, who he had known for some time, into bringing Thai-made meth into the country.

In particular, Mr. Choi immigrated to the United States as a child and became a permanent resident (his nationality is South Korean), but in 2005, he was deported for domestic violence and after that came to our country and taught students as a native speaking instructor in the Bundang and Suji areas of Gyeonggi-do for several years.

Police also disclosed that in 2006 he was sentenced to and served two years in prison for involvement in the crime of manufacturing drugs.

When Choi was arrested at dawn on February 26 he was high on methamphetamine and he said that the hallucinogenic effects of one dose of methamphetamine lasts about five days.

Police explained that Choi taught at three hagwons and 7 private lessons, and they cannot rule out the possibility that he taught middle and high school students while high.

The criminal background check hagwon that must be undergone by instructors teaching young people only confirms whether or not there are sex crimes, and Choi, with his drug-related criminal activity, was not filtered out.

While the title of the KBS report about this is fairly tame ('Hagwon native speaking instructor turned out to be a drug criminal'), News Y's report is suitably sensational: 'Native speaking hagwon instructor with criminal record for drugs teaches class while high.' One has to appreciate how we go from the assertion that police "cannot rule out the possibility that he taught middle and high school students while high" to the headline above. Local media tend to highlight the identity of the teacher:

Mind you, Chungcheong Today's article wins the most points in this regard, both with its title - 'Drug-taking native speaking instructor spouts nonsense ("shalla shalla") at the lectern' - and its opening sentence:


There is shock after it was disclosed that a native speaking instructor who was released after serving time in prison for being involved in drug production recently taught young students while high on methamphetamine.

Anyway, the overseas criminal record check requirements called for in the 2011 revision of the Hagwon Law apply only to 'foreign instructors', who are defined as "non-citizens of the Republic of Korea who [...] are responsible for instruction in a hagwon." There clearly is a loophole here for Koreans who have lived abroad and are considered 'native speakers.' The public school system, as far as I know, requires overseas criminal record checks from even Korean nationals, but clearly the Hagwon Law does not call for that, despite there being several cases where this kind of thing has happened. Of course, the problem is that even local drug arrests didn't seem to matter for a Korean national teaching in a hagwon, and, unsurprisingly, there are calls to change this.
Posted by matt at 5:01 PM

"When Choi was arrested at dawn on February 26 he was high on methamphetamine and he said that the hallucinogenic effects of one dose of methamphetamine lasts about five days."

Methamphetamine is a stimulant not a hallucinogen. But I'm quite sure most Korean journalists are hallucinating when they write their "factional" crap.

The symptoms of stimulant psychosis may vary slightly depending on the drug ingested but generally include the symptoms of organic psychosis including hallucinations, delusions, thought disorder, and, in extreme cases, catatonia. http://en.wikipedia.org/wiki/Stimulant_psychosis

Yeah, well, that Wikipedia page also says that cocaine and coffee can induce psychosis so take it with a grain of salt. If you've been awake for five days straight, you will probably hallucinate from lack of rest and extreme sensory fatigue, but I question whether "one dose" of methamphetamine really lasts for "five days." Certainly if he had been in a "psychotic state" it would have been noticed by students and colleagues at his workplace. More likely, the reporter has no clue about different types of drugs and merely wants to scare readers by exaggerating their effects. Propaganda as social control, in other words, mixed in with a strong measure of xenophobia, which is itself a form of social control, of course.

I agree, it's all about social control, but ,edia collusion in govt propaganda is not just a Korean thing (Just Say No, Dare to Keep Your Kids off Drugs, MADD). You would definitely lose your mind if you had been awake for five days. Could a gram of meth do that? Not sure. I'm going with...maybe. Cocaine psychosis is pretty well-documented (and visible on the streets of most North American cities): https://www.google.ca/search?q=cocaine+psychosis&ie=utf-8&oe=utf-8&aq=t&rls=org.mozilla:en-US:official&client=firefox-a&channel=sb&gfe_rd=cr&ei=whxGU93IKeOV8QeMwoH4Dg

If someone is suffering from "cocaine psychosis" it is usually because they are crackheads or shooting it. Sniffed cocaine is a popular social drug among upwardly mobile urban dwellers in major cities in the West, such as New York, London or Sydney, and in such conditions rarely leads to "psychosis" or "hallucinations." It's important to always keep these different distinctions in mind.

Just to follow up on my previous comments, it irks me when methamphetamine is equated with hallucinogens in an article such as this one because while meth and speed are often terribly destructive, hallucinogens (or entheogens) can help open the "doors of perception" and thereby be of great spiritual and intellectual growth. If every Korean dropped LSD just once, I always say, this country would finally realize genuine liberation. Of course, I'm confident that the media here, whose preferred drugs are booze and narcissistic nationalism, will ensure that such views never reach the wider populace here.