I made an error or two in my "geohistorical guide" (as Owen aptly describes it) to Three Generations, so I'll point them out here. The main error is that I misunderstood where the exact location of Jingogae was (I was off by a block or two). I've since changed the post, since the way it's structured, allowing the reader to wander down long lost streets, doesn't really allow for an update at the top along the lines of "Oh, I messed up on this and found some new photos," and then adding them to the top of the post. I've instead inserted the new photos into the 'geographical narrative' of the post, so I thought I'd leave the original text and photos that I changed here. Below is the original map I made. 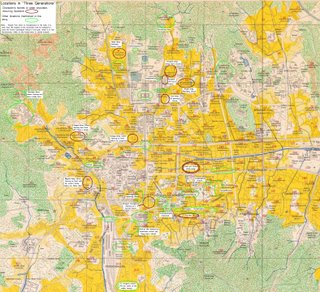 On this map is my mistaken location of Jingogae / Bonjeongtong. This is what I initially wrote:

Now Jingogae... hmmm. I've heard several different explanations of where Jingogae was. One book (and a few websites) say that it was located between (and south of) what is now Chungmuro 1-ga and Chungmuro 3-ga. Other sources link it simply with modern day Chungmuro (which is essentially the same thing). It seems Jingogae was the area, but was also the name of the street (Chungmuro), but the street had another name as well - Bonjeongtong. The area was also known as Honmachi in Japanese, but I've seen some sources call the street that as well. In this article (which is well worth a read) about colonial Myeong-dong, Andrei Lankov describes Honmachi as being Myeong-dong, and not Chungmuro, which is different from what I've read. At any rate, at that time, Jingogae was the center of the Japanese settlement in Keijo.

I was put off a little by the discrepancy between my and Lankov's findings (especially considering he would have likely been looking at contemporary sources) - and of course I was mistaken, something I realized when I saw this photo of the post office taken from the top of the Mitsukoshi department store, with the entrance to Jingogae at the far right: 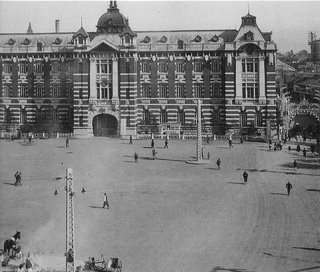 This photo, and a few others I used, where provided (via links) to me in the comments to the original post - big thanks to Mika. As I write in the updated post: "Now, initially I'd thought Jingogae was the street known today as Teogyero, but I've since come to realize that was not the case, mainly due to the picture above and from the part in the book where Gyeong-ae and Sang-hun ride in a hired car from Anguk-dong to Yeongnakjeong, turning west towards Namdaemun, and when arriving at the "entrance to Jingogae", they headed for the restaurant named Cheongmokdang, which I've already described." The route described above can be seen in bright red on this map, heading from north to southwest: 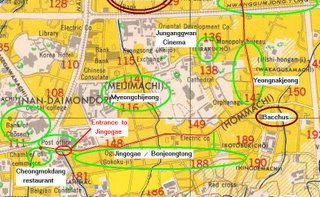 I also added that "I don't know the exact location of Bacchus, of course, but in the novel it is described as being "at Samjeongmok on Bonjeongtong". From what I've read, it seems sam (ie. "3") jeongmok corresponds with Chungmuro 3-ga, and so that is where I've located it on the map above."

I also add the photo below, which "is likely taken from the roof of the Mitsukoshi department store, and in it we can see the bank of Korea, at left, and the post office, at right. The advertising tower/billboard next to the post office is for a Japanese skin care product called "laitcream", more information about which can be found here (hat tip to Mika). If you were to continue straight up Namdaemunro, instead of following the curve, you would end up in the aforementioned Suha-dong, where Deok-gi lived." 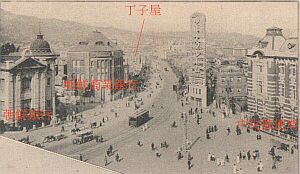 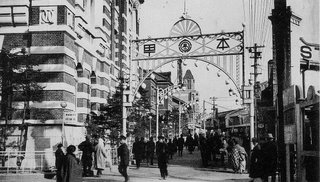 I also changed the photo of the bank of Korea, mainly because the new photo corresponds with the point of view of a person viewing the post office from the northwest and then turning to face the bank (yeah, I'm picky, but I also like the new photo better). Below is the old one. 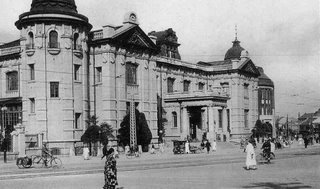 Anyways, I just thought I'd make clear what I had changed in that post, while trying my best not to interfere with the flow of that post. I hope this is helpful.

Oh, I just thought it would be interesting to see, after I commented in my last post about the misattribution of photos, how the framing or cropping of photos can really confuse people. Look here, for instance: 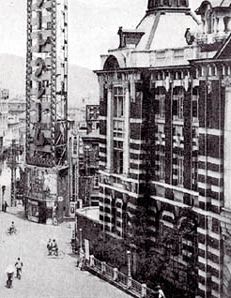 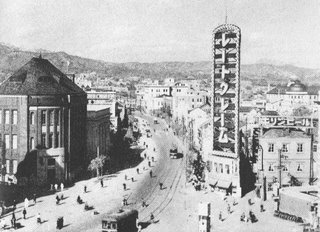 Now, it seems clear that these photos were all taken at different times from slightly different vantage points, but it's not until the last photo, with more room and lack of zoom, so to speak, that you can be 100% certain of the location.
Posted by matt at 12:55 AM

Long time reader and fan. I just wanted to mention that I was inspired by this post (and my love of that same Three Generations novel) and have been using this as inspiration for a few papers and a possible application I have been working on to let students explore the old and new of Seoul as seen through this novel (as much as is possible). Just wanted to let you know that I was inspired by this post. Happy to tell you more if interested. All my best!