Bibliography of the Kwangju Uprising (in English)


Here are the books, articles, and other resources I know of (mostly in English) that pertain to the Kwangju Uprising, beginning with the earliest books to be published.

Kwangju in the Eyes of the World: The Personal Recollections of the Foreign Correspondents Covering the Kwangju Uprising, Pulbit Publishing Company, 1997.

This book collects the accounts of seven foreign journalists who were present in Kwangju during the uprising. The accounts can be found online here. An article about the book by contributor and editor Henry Scott-Stokes can be found here.

The underground 'bestseller' after being banned when it was released in 1985 under the title "죽음 을 너머, 시대의 어둠을 너머", under the name of well known author Hwang Seok-yeong. It could be seen as being hyperbolic and emotional - but perhaps for that reason it captures the esssence of the uprising, at least from the point of view of a student. Additional essays by Bruce Cummings and Tim Shorrock come from a very clear point of view.

A look at those who still bear the scars and wounds of the uprising 20 years later.

John A. Wickham, Korea on the Brink: A Memoir of Political Intrigue and Military Crisis, Potomac Books, 2000.

Wickham was the US General in charge of the Combined Forces Command, and thus most of the Korean army. Details his dealings with Korean military leadership. An interesting look at the propaganda and point of view of the Chun clique, at least from the bits I've read so far. It also includes the 1989 White Paper.

An account of the period between Park Chung-hee's assassination and the sparing of Kim Dae-jung's life, with a close look at US relations with Park Chung-hee  Chun Doo-hwan and the build-up to the Kwangju Uprising, by the US ambassador at the time. Provides a good look at the political scene in Korea; several cables sent back and forth between the embassy and Washington are included.

This book is essentially an updated version of Kwangju in the Eyes of the World, which includes Korean journalists' accounts of the uprising. Again, the foreigners' accounts can also be found online here.

Linda Sue Lewis, Laying Claim to the Memory of May: A Look Back at the 1980 Kwangju Uprising, Hawaii Studies on Korea, 2002.

Lewis, an anthropologist who witnessed the uprising, reflects on her own memories and how Korean society has come to memorialize the event. Excerpts can be found here (1 2 3 4)

A collection of essays by various contributors looking at different aspects of the uprising. US missionaries present during the uprising, sociologists, medical specialists, historians, and others examine the event and its legacy.

Young was one of the first to be trained as an area specialist in the US military and spent 14 years in Korea. A fluent Korean speaker,Young served as a military attache at the US Embassy in Seoul in 1979, acting as a liason between the ROK Army and the Embassy. He offers criticism on all sides of the events surrounding Chun Doo-hwan's rise to power.

Ryu Shimin and Jung Sangyong, Memories of May 1980: A Documentary History of the Kwangju Uprising in Korea, trans. by Park Hyejin, Kwangju Minjuhwa-undong Kinyeom-saeophoi, 2004.

Includes everything from statistics and victim, witness and military testimony, to injury reports and internal military documents. A very useful book. It is available as a pdf here (clicking begins download).

Originally published in Korean as "The Sociology of the Gwangju Uprising" (오월의 사회과학) in 1999.

Donald Kirk and Choe Sang-hun, eds, Korea Witness: 135 Years of War, Crisis and News in the Land of the Morning Calm, Eunhaeng Namu, 2006.

Over 40 pages of this book are dedicated to journalists' accounts of 5.18.

Paul Courtright was a Peace Corps Volunteer who witnessed the uprising and helped interpret for foreign journalists, including Time magazine's Robin Moyer, who contributed a number of his unpublished photos to the book.

Martha Huntley, "Should we tell you about this?" Presbyterian Survey, March 1982.

Jame's Fenton's "Kwangju and After", from Granta 24 as well as an extended version in All the Wrong Places: Adrift in the Politics of the Pacific Rim, Atlantic Monthly Press, 1988.

After the June 1987 democracy protests, in 1988 the National Assembly held an inquiry into the Kwangju Uprising. In response to questions by the National Assembly, the US State Department released a ‘White Paper’ in June 1989 titled “United States Government Statement on the Events in Kwangju, Republic of Korea, in May 1980.”


American diplomatic cables from late 1979 to mid 1980 (the Cherokee Papers) were obtained and written about by journalist Tim Shorrock in a February 27, 1996 Journal of Commerce article titled "Ex-Leaders Go On Trial In Seoul." An even longer version was posted at Kimsoft in 1997 (judging by the Wayback Machine) titled “The U.S. Role in Korea in 1979 and 1980.”

In 1997 the Gwangju May 18 Historical Materials Compilation Committee released volumes 6 to 10 of the May 18 Gwangju Democratization Movement Materials which contain this entire collection of unclassified cables sent between the US Embassy in Seoul and the State Department in Washington DC, which total around 3,700 pages. They can be found online (pages can be downloaded to be read at full size):

The US government in 2020 released fully-uncensored versions of 43 these cables; they can be downloaded from the 5.18 Archives here. 문서 목록.pdf  is the table of contents, while 미측 기록물(43건).pdf contains the cables.

The US Embassy website is also hosting over 120 cables, 33 of which it posted in spring 2020; 36 more followed in 2021. The most recent additions are from the Jimmy Carter Presidential Library. The majority of this material is available at the US Embassy's website in six large pdfs under the names "Carter Presidential Library Documents." Another set of documents from this collection can be found here at the May 18 Archives website; they're contained in a zip file (look for "파일: 카터 기록관 신규 공개자료.zip") with various folders of material, including one folder of cables related to the immediate aftermath of Park Chung-hee's assassination and another of cables related to Kim Dae-jung's trial.

The National Security Archive has made available 18 internal US government documents related to Korea from the Carter Presidency.

Seven documents about 5.18 coming from the US and North Korea, including Donald Gregg’s May 21, 1980 Memorandum for Zbigniew Brzezinski, can be found at the Wilson Center here. As well, a key document not in that document collection is the May 22 Action Memorandum From Richard Holbrooke And Anthony Lake To The US Secretary Of State, ‘PRC Meeting On Korea’, an excellent companion piece to the Platt Memo.
The May 22, 1980 PRC Platt Memo - a memo by Nicholas Platt, then a senior aide to Defense Secretary Brown, recording the conversation at the Periodic Review Committee meeting at the White House that day - can be found in English at the bottom of this page or as a Word file here.
Interviews with former US Embassy staff from the 1980s can be found here.


Mark Peterson, who interviewed General Wickham and former Ambassador Gleysteen in 1987's The Kwangju Uprising: Shadows Over the Regime in South Korea, presented a paper titled "The Kwangju Resistance Movement, May, 1980: Some American Perspectives" at a 1997 conference in Kwangju. Peterson was the Fullbright director in Seoul at the time of the uprising. (Hat tip to Plunge)


Donald Sohn's 1998 MA Thesis Chun Doo Hwan’s Manipulation of the Kwangju Popular Uprising, which is based in part on the Cherokee Papers, can be found here.

Sally Yea, "Rewriting Rebellion and Mapping Memory in South Korea: The (Re)presentation of the 1980 Kwangju Uprising Through Mangwol-dong Cemetery," 2002.

In Sup Han, "Kwangju and Beyond: Coping with Past State Atrocities in South Korea", Human Rights Quarterly 27, 2005

For links to narratives of the Kwangju Uprising in different media (like short stories, poems, woodblock prints, etc), see here. 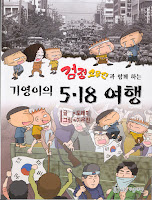 I picked this up in Kwangju in 2005. A comic (with photos as well) which depicts the uprising, and in which fictional characters interact with real victims of the uprising. An interesting study in how the city instills civic pride and creates a mythology of the uprising for the younger generation.


I'll update this as more comes to my attention.

And here I thought my library of books on this subject complete. I only have about half of them! You missed one though, can't think of the name. It was written by Mark Peterson PhD. He interviewed the US Gen., can't think of his name off hand, who was in control of forces in Korea during that time about what happened, etc. Interesting read.

"Comparing the Paris Commune and the Kwangju People’s Uprising: A Preliminary Assessment" by George Katsiaficas can be found here

Thanks for those links.

I'd read the Katsiaficas essay before, but hadn't read anything by Mark Peterson - great stuff. I'll have to track down that book he contributed to back in 1987 - it's at the top of this post now.

Comprehensive and useful links for anyone interested in Korea. Reference Tim Shorrock’s article. This is a first rate piece of investigative reporting. A truly professional piece. Yet it is flawed by the inaccuracy of some reasonably sounding judgments. Just a few examples will suffice:

According to the DIA cable, all Korean Special Forces units “had been receiving extensive training in riot control, in particular the employment of CS gas had been stressed.” CS gas is a virulent form of tear gas banned in many countries and considered b y some military specialists to be a form of chemical warfare. (My note: Careless exaggeration on Shorrock’s part. CS gas was a standard issue riot control agent of the period. No one who entered the U.S. military in the late 60’s to 80’s did not go through basic training without exposure to it. Why not give us a sample listing of the “many countries” who allegedly ban it, and the name of some eminent military authority who considers it a “form of chemical warfare”.)

“there was general agreement that the first priority is the restoration of order in Kwangju by the Korean authorities with the minimum use of force necessary.” (Good point which reinforces U.S. position.)

The very fact that the DIA was reporting on secret military missions by the Korean Special Forces underscores the unusually close ties between the U.S. and South Korean militaries. (Yes, close relationships existed which facilitated the gathering of intelligence on an ally, no small reason for classifying all this traffic. That did not insert U.S. officials into the Korean command authority chain.)
Why this occurred is not clear. But the State Department portrait of a lawless city undoubtedly contributed to the decision made by the Carter administration on May 22, 1980, to allow Chun Doo Hwan to end the standoff in Kwangju with military force. (Shorrock confuses the decision not to forcefully oppose Chun Doo Hwan’s actions in Kwang-ju, which he has amply documented, with the putative power to approve or disapprove such action. The Carter Administration held no coercive power over the Korean government (or military) at all when it came to matters of sovereignty, as Shorrock himself lays out. He should have chosen his verb with greater care.

One final thought on Kwangju. The Army whose leaders took Korea into democracy, cut their teeth on Kwangju, either as participants, or in support of participants, or reviewing what they heard happened there versus what they got from the news. It would be interesting to see how the rank and file professionals of the Korean Army viewed Kwangju in retrospect, and how those perceptions shaped their attitudes to their own and the military's role in society. Could it be that were was a generation that, while wearing their country's uniform, vowed: "Never Again!" If so, here's hoping some Korean hsitorian documents it.