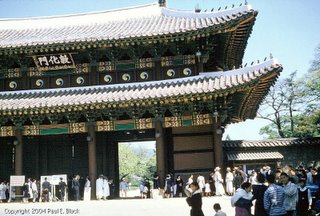 Paul E. Black's 1959 photo of Donhwamun, the main gate of Changdeok Palace. Rebuilt in 1607, it is the oldest wooden gate in Seoul.


Seeing as the last post was about a piece of 500-year-old architecture, it brought to mind some other old architecture I'd seen recently. In this post, a few days ago, Antti reminded me of the existence of Neil Mishalov's website. Mishalov served with the US military in Korea back in 1968 and 1969, and took hundreds of photos of the countryside around where he was posted (near Anyang), Seoul, Incheon, Osan, and other places around Korea. Also to be found on his site are photos taken by two other servicemen (Donald Gaydos, in 1954-55, and Paul E. Black, in 1958-59). It goes without saying that it's a fascinating site.

At any rate, there are a number of photos of traditional buildings amongst Paul Black's collection (on this page) which are labelled as unidentified temple scenes . They're actually palaces, and most of the photos are of Changdeok Palace. You can see the comparison between 1958 and present day here:

It's interesting to note how the buildings have changed since 1959 (only six years after the war). The buildings today have fresh paint, and do not allow people to approach as closely as in the past. In the last set of photos, the throne, and the painting above it, have changed, but the room is still the same. Thinking in terms of 'branding' as I mentioned in the last post, is the new throne more representative of what would have existed there during the Chosun dynasty, or does it (and the painting) just look more regal? At any rate, I don't know if the Secret Garden was open to the public in 1959, but Neil Mishalov took some pictures of it in February, 1969 (the last three photos on this page, and the first three on this page).

Some of the other photos are from Deoksu Palace, such as this and this. In two other photos (here and here) the same fountain can be seen (the two photos are facing west and east, respectively). Seokjojeon, the European-style building in the first photo, was completed in 1910, and is now an art gallery, as it was under the Japanese occupation.

Also taken at Deoksu Palace are photos of the display board for a water clock, and a picture of a bell; this is how they are displayed today. It's interesting to see how information boards have changed - and is that water clock truly one of only two in the world? I have my doubts.

Intrepid palace watchers may have a better idea where these photos (1 2 3) were taken.
The first two are of the same building, but I have no idea which palace it is to be found in (ditto for the third photo).

I imagine there would have only been two palaces intact (for the most part) in 1959: Changdeok Palace and Deoksu Palace. A glance at this photo makes clear that there wasn't much left of Gyeongbok Palace by 1945, and I doubt much restoration would have taken place by 1959.


I'm not so sure about Changgyeong Palace, however. I know that a zoo was built there during the colonial era, and judging by the photos at the top of this page (photos 4-9), Neil Mishalov was able to visit it in 1969. Whether it was open in 1959 I have no idea. It's probably worth keeping in mind that Gyeonghui Palace, was only opened to the public in 2002, after a 14-year -long restoration. The fact that it was once so large it was connected to Deoksu Palace by an overpass is fascinating, considering how small the restored palace is today.

If you've made it this far, you may be interested in this article, about a women (and her family) who learned how to make bricks the traditional way, and whose bricks are often used in restoration projects involving traditional architecture.
Posted by matt at 2:03 AM