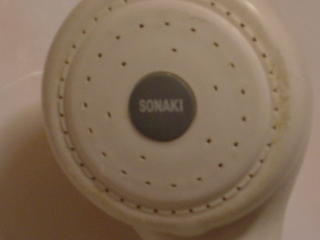 The word 'Sonagi' is sometimes translated as 'shower' (perhaps that's why the brand name on my shower head is 'sonaki'?) but a better translation would be 'cloudburst'. The weather in Seoul this August has featured a good many of these sudden downpours; sometimes there have been 4 or 5 in a single day, making it necessary to carry an umbrella with you at all times.

What prompted this post, however, was not the rain, or my showerhead, but that fact that, after complaining here that I couldn't find it, I finally found a translation of Hwang Sun-won's short story Sonagi online.

Sonagi has been a staple in Korean middle school textbooks for a long time, so most people in Korea would know it. Kim Jong-hoi writes that

"It is such a profound presentation of a subtle emotional connection between a boy and a girl, an exchange so tender and frail that one does not dare call it love."

Cha Tae-hyun's character in the movie My Sassy Girl (엽기적인그녀) makes a comment about Sonagi saying that since everyone has read it, it has influenced the Korean affinity for melodrama (this is followed by a scene in which the story is parodied in a pretty twisted (and hilarious) manner). It should be said, though, that Sonagi is not melodramatic; excessive melodrama is so common in Korean film and TV that I can think of few Korean films that have love and death that aren't overly melodramatic. The only one I can name off the top of my head would be Hur Jin-ho's Christmas in August (8월의크리스마스

At any rate, the story can be found here (scroll down to the very bottom; the aforementioned essay by Kim Jong-hoi about Hwang Sun-won's writing may be worth a read as well). If you look through other issues of the magazine, there are also other stories translated.
Posted by matt at 10:08 PM

I liked your blog on Sonagi.
I found a couple of translations of Sonagi,

Thanks for those links, especially considering the original link doesn't seem to be working at the moment...