I was meaning to update the story of the 개똥녀 (aka 'Dog dung girl', aka 'Dog shit girl', aka 'Dog poop girl', aka 'Dog Excrement girl') after finding a few new (and some old) posts on it which shed a little more light on the event. However, now that she has made the Washington Post, an entirely new twist has been added to the story.

The reason that the story of the 개똥녀 made her way to the US was because of blogger Don Park, whose June 8 post, titled 'Korean Netizens Attack Dog-Shit-Girl' (and based on Korean language sources) included some troubling information that was not included in the English language Joongang Ilbo article posted a day earlier.


When nearby elders told her to clean up the mess, she basically told them to fuck off. A nearby enraged netizen then took pictures of her and posted it, without any masking, on a popular website which started a nationwide witchhunt.

For the "enraged netizen's" account of what happened, do read the article over at migukin, which has useful translations. Suffice to say, from this netizen's account, the girl in question was given towels and tissues but refused to clean up the mess, despite the urging of many around her, which prompted this woman to take the pictures.


The subway way train got to Ahyun Station and when the doors open, she got off. At that time, she said something rude to the ajumma.

Contrast this with the Joongang Ilbo article, which said only that netizens

began visiting the Web site of the university they assumed the woman attended, and bombarding it with postings. The site's server went down because of the surge in traffic. Then people began calling the university...

Though a week later the Hankyoreh spoke of 'unspeakable verbal abuse unleashed on...the so-called "dog shit woman"', and the Korea Times wrote that 'some Web surfers revealed her name, age and school after seeing the picture at many Web sites', and just a few days ago the Herald wrote that 'thousands visited her personal Web page to criticize her', none of these sound as serious as the situation Don Park described on his blog (for example, they never mentioned the calls for names of family members). These articles (especially the Joongang one) seem to have left some important details out, as is common for Korean newspapers when translating articles into English (though it's becoming less common as time goes on). The omission of these unpleasant details certainly coloured my initial reaction to the event.

Mugukin posts a translation of the apology that appeared on this photo, apparently posted by the girl herself: 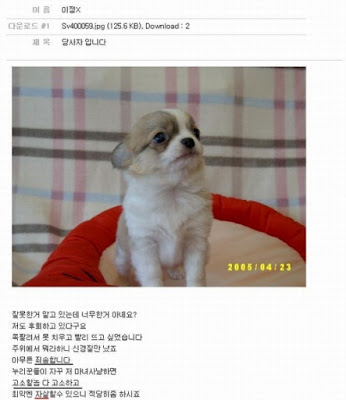 I know I was wrong, but you guys are so harsh. I’m regret it, but I was so embarrassed so I just wanted to leave there. I was very irritable because many people looked at me and pushed me to clean the poop. Anyhow, I’m sorry. But, if you keep putting me down on the Internet I will sue all the people and at the worst I will will commit suicide. So please don’t do that anymore.

Park also included links to parodies and photos, as well as a few quotes and paraphrases, such as:


Her life deserves to be ruined and she won't kill herself because she is a thick-skinned bitch.

"Thanks to technology, we are able to build a better society in which citizens are the police, prosecutors, and judges."

This reminds me of a statement in the aforementioned recent Herald article regarding the results of a poll on cyber witchhunts:


'Twenty-four percent said it violated privacy, while 26.2 percent believed that witch hunts are necessary. Apparently, '979 cases of cyber witch hunts were reported last year. There were only 33 reported cases in 2001. Defamation of character complaints increased from 245 in 2001 to 1,306 this year'.

Of course, the story of Dogshit Girl (abbrieviated to DSG on Park's blog) has been referred to constantly in the Korean media since the incident occurred, especially in the deluge of 'cyber terror' articles and editorials mostly supportive of a measure to ban aliases on some internet sites in Korea. But she has also become well known in the US blogosphere as well, due to Park's initial post on June 8 (some of the comments upon which are well worth reading).

On June 29, the popular site Fark linked to Park's DSG story, where the link to his story has been clicked on 41857 times (Park noticed this the next day). While most of the commentary is not worth your time, the parodies US bloggers have posted there are worth a look (if only to see the gulf between photoshop skills in Korea and in the US). Soon, a number of American bloggers began to comment on the significance of the DSG incident in a world where so many people have access to digital cameras and blogs, and the use of these to enforce norms.

From there, these bloggers obviously caught the attention of the Washington Post, which published an article on July 6 titled 'Subway Fracas Escalates Into Test Of the Internet's Power to Shame'. What's interesting is that, though he presents at least one new fact (maybe) about the original incident (that she had quit her university), the article is mostly an article examining the opinions of American bloggers who posted articles after Park's original DSG post became well known. It's well worth a read, but doesn't focus on the Korean context in which the incident occurred, but instead wonders about its significance for internet culture in general.

A comment...somewhere... pointed to the story of Laura K Krishna, from late March this year, as an event similar to DSG (start at the last post...)

[Edit]
At the top of this post, I was listing all the variations on the 개똥녀's English names, mainly because I thought it was funny to see how it was translated considering how taboo 'Poo' is in English (while such taboos don't exist in Korea, really). I believe the Hankyoreh was the only paper to use the word 'shit'. At any rate, I didn't realize I'd unwittingly guaranteed that whatever name you punch in, this page would pop up on Google...
Posted by matt at 5:57 AM

Awesome recount of what happened, Matt.

Re missing details in my post, they are based on hundreds of comments I've read on Korean newspapers, forums, and hompys. For example, if you examined some of the photos you'll see a couple that was taken on another train by someone who recognized her. That was not mentioned by any of the newspapers I read.

Thanks for the kind words (and the link). I googled around when it first happened and found lots of photos on Daum, including that one you mentioned that was taken by someone who recognized her (apparently the next day). Even though the Joongang Ilbo article which broke the story in English left out the more ominous aspects of the story, that photo alone was enough to make me realize something darker was going on (which I mentioned in my first DSG post).

What I find interesting is that it was DSG that finally brought about recognition of the (at this point) distinctly Korean problem of, ahem, 'cyber terror' in the Korean media - at the same time that your post caused it to become a part of a discourse on surveillance and the dark side of technology in the US.

It's a bit of a chicken and egg argument when you ask where the 'event' originated - was it the reaction of the angry mob to the posted picture, or the actions of the person who took the picture (whose reaction to the actual incident was considered a justified and culturally sanctioned response (atleast among certain segments of Korean netizens)). In the end, the entire debacle consisted of reactions to reactions to reactions, to the point that the Korean media's reaction to the Washington Post article is so far removed from the original event that it elicits amazement when you consider how trivial the original event really was.

The WAPO article was in the Los Angeles Times with the headline "But that's Big Brother's job." I commented here on they dismissive, defensive and downright dishonest way that the writer used the incident to make a moral statement on blogging and its excesses.

Dog Poop Girl is the 2nd Internet Celebrity on the RealLifePixel webcam.

I wish I could figure out how to post links. Anyway, I cited this post on a new post I am writing some four years later.

And it's too bad the migukin.com link is dead (well, the whole blog is defunct). Though I was highly critical of his guest-blog posts at Marmot's Hole, I did find his writings on his own blog quite all right.