Joongang Ilbo: "Get a Korean woman pregnant": Shock over manual for foreign men

Annnnd it appears we have a new series. Last Friday (March 29), the Joongang Ilbo reported on how its television network, JTBC, decided to end the 'anti foreign English instructor article' drought in a big way (hat tip to Robert Koehler):


"Get a Korean woman pregnant": Shock over manual for foreign men

During a broadcast of the JTBC crime prevention talk show "We are detectives" on March 28, stories about foreign crime were shared.

On the show a ranking of types of crimes by foreigners was made public. The results revealed that at #1 was assault, #2, fraud (such as voice phishing, and international marriage), #3, burglary, #4, sexual crimes, and at #5 was drugs. In particular, it was pointed out that, as the sex crime rate has increased by 73% in the past three years, government measures are urgently needed.

In fact, the posting of "How to target Korean women" at a site used exclusively by foreign English instructors caused shock. According to the post, when it comes to Korean women, if an English speaking white male shows a friendly appearance and is complimentary and well mannered, they can easily commit sex crimes.

A detective at the Yongin Seobu Police Station advised that, "It seems like a yearning for advanced countries and a social atmosphere in which English ability is important [has led to people] letting their guard down regarding foreigners from English speaking countries." "Rather than having blind, reckless feelings, we should pay attention in order to prevent crime."

So then, how should foreign sex crimes be dealt with when they arise? Detective Kim Su-jin, of the Seoul Metropolitan Police Agency, said, "In our country, foreign crimes are punished just as Koreans' are." "You need to ask for help by preserving evidence and reporting to the police."

In fact, among southwest Asian men, there exists a "Manual for getting Korean permanent residency." According to this, it shockingly advises that they should approach women with disabilities, older unmarried women, or young woman and get them pregnant, and then stay married for two years.

Solbi, who appeared on the panel, said angrily, "Intentionally approaching Korean women and getting them pregnant can't be real," and Heo Jun's reaction was to say, "Using Korean women's maternal love is the worst crime."

Yes indeed, the breakdown of crimes by foreigners above is based on the Korean Institute of Criminology report first mentioned in the news a month ago by the Herald Gyeongje (which also published a cut and paste of the Joongang Ilbo article above on Friday). At a guess, I'd imagine the "We are Detectives" episode was influenced by the Yonhap article about the KIC report published last Monday. As for the shocking "Manual for getting Korean permanent residency," it appeared on an episode of tvN’s "Real Story: Myo" (yes, that Real Story: Myo) which looked at the danger foreign crime posed to Korean women: 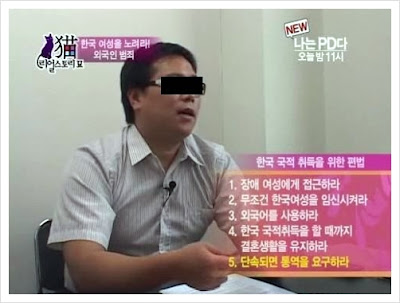 That photo comes from Kangaji (via ROK Drop), who translated both the above rules  and a parody of those rules by conservative netizen site Ilbe.

Here's a preview of the show, which features on its panel singer Solbi and Australian (Korean speaking) comedian Sam Hammington.

JTBC actually posted clips of it at its site and on Youtube. I'll post about them this week, as well as an earlier Joongang Ilbo article about Xenophobia that relates to this show.
Posted by matt at 3:07 PM

No. Not this again.