Interesting news yesterday about the firebombing of an English hagwon in Daegu Monday. As the Joongang Daily describes it,


At 7:07 a.m. yesterday, an explosion went off on the third floor of a nine-story building in Suseong District, Daegu, starting a fire. Two arsonists had gotten access to the floor and hurled glass bottles filled with flammable liquids.

A janitor alerted local police, who dispatched officers to the scene. They suspected terrorists because the target of the attack was the American Cultural Center, located on the third floor of the building.

The intention was indeed to strike against America. Unfortunately for the terrorists, they ended up torching a private, Korean-owned English academy.

As the Donga Ilbo describes it,

Housed at the building is 'American Culture Center' (in Korean), or 'Independent Center for American Studies Daegu' in English.

Police believe that anti-American activists mistook the building as an American culture center operated by the U.S. government, and installed handmade explosives there. The academy, however, is a private English cram school for elementary and middle school students, which has about 100 students enrolled.

It's hard to know what kind of 'handmade explosives' they were exactly. While there were certainly 'glass bottles filled with flammable liquids,' this paragraph from the Donga Ilbo makes it seem they didn't just hurl them and run away:


Surveillance camera footage showed that two men with large physique, seemingly in their 20s and early 30s, went up stairways at around 6:39 a.m. on the day, carrying sags and pulling down their hats, and hurriedly ran away from the building about two to three minutes later.

There seems to have been 25 minutes between them leaving and a popping sound being heard. As the Joongang Daily relates,


The fired burned parts of the school's front door, walls and floors. Firefighters arrived at the scene quickly and put the fire out. No casualties were reported.[...]

Armed soldiers from the 50th Division of the Korean Army were dispatched to stand guard in front of the building yesterday. 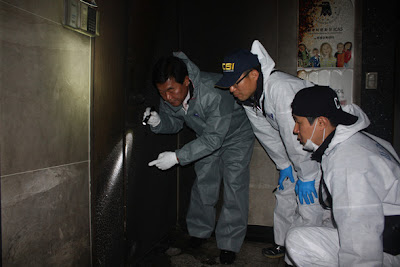 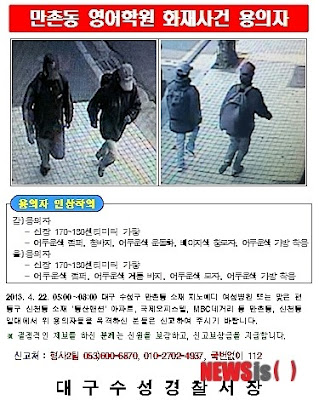 The police poster above shows the suspects; another flyer can be seen here.
MBC's report shows one of the flyers left behind by the arsonists: 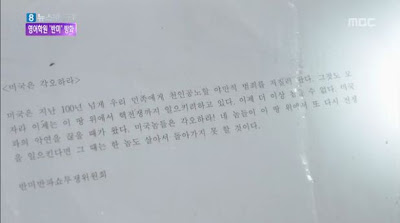 The Hankyoreh's article reprinted most of it; here it is transcribed:


- Stand resolutely against the US! -

The U.S. has committed barbaric and unpardonable crimes against our race for over 100 years. As if that wasn't enough, they are now attempting to wage a nuclear war over this land. We can't bear this any longer! The time has come to end this ill-fated relationship with the U.S.! Stand resolutely against the American bastards! If those bastards start another war over this land, not a single [American] bastard will come back alive!

Police (unsurprisingly) reported there is no such committee registered with authorities, and the incident has even gotten some international attention (The Express has an article titled 'Korean terrorists target US but mistakenly fire bomb a school').

It's hard to know what to make of it. It's been suggested that it's a former employee seeking revenge, others call them terrorists. The rhetoric above is very similar to North Korean rhetoric, or the rhetoric of NL pro-North Korean nam Joseon progressives of the sort who did burn American Cultural Centers or information centers in places like Gwangju, Busan and Daegu in the 1980s. (Just for fun, the rhetoric is also similar to WWII Imperial Japanese rhetoric against Anglo-Americans (who carried out 'brutal crimes of exploitation for centuries'). The last sentence was translated by the Joongang Ilbo to say "No single American will leave this country alive if Washington wages another war here," while the Donga Ilbo ended saying of Yankees, "you should be ready to leave," making it seem as if American residents here would be targets, though I think 'not a single [American] bastard will come back alive' refers to US soldiers. Still, if a hagwon was their actual target, perhaps they do have civilians in mind.

It might be worth remembering the 'Yankee Strike Force' proposed during the English Spectrum Incident in 2005 (looked at in context here) which was to target "the Yankee bastard who posted the instructions on how to carry out sexual violence against female Korean students and his sympathizers" and the "Yankee bastards who threw the promiscuous party" on the streets of Hongdae or Sinchon.

On the other hand, it really isn't clear if these guys are actually some anti-American group against the US military who targeted the wrong place, if they're against Americans in general and targeted the right place (one wonders if a native speaker works there), or if they're just using this rhetoric to cloak other intentions against that hagwon. Time will tell.
Posted by matt at 1:45 PM

Could be anything, including a disgruntled ex-employee. That said, I'm curious to find out who worked here. None of the reports mentioned the name of the hagwon or if any foreign teachers worked there.

The newspapers were all over the story of the "fleeing teacher" (here, here) who left Korea because of "she was afraid of war breaking out". Well, now that local hagwons are being firebombed by apparent NK sympathizers you'd think news agencies would be interested in following up, interviewing foreign teachers, etc.

I can't find an employee directory there, but some of the photos of the school (not the stock photos) show some foreign English teacheres.

That's a weird website. Although it's almost entirely in Korean when you scratch the surface, the usage of the Eagle and the references to 'American Studies,' Dept. of Education and International Exchange Center give it a quasi-governmental, or at least academic, feel. It's clearly just a hagwon, when you look at everything else: Kid's Camps, Mom's Classes etc. I'd bet they have or at least have had E2 visa-holders working there. In some ways it's a perfect target: it uses the name of something official-ish, but really isn't so has no security. There is little risk in being caught, but it sends the right message to the US and Americans (and pretty much all foreigners) in Korea: get out or get ready to eat the kimchi and say you like it when Heavy Kim and the Boyz take over.

Thanks Brian for the link to

If this is indeed the school that was firebombed then the website may go a long way toward explaining why it was picked as a target, especially if the "terrorists" were netizens trying to act out in the real world. The photos promoting the school alone -- with Koreans and foreigners interacting (gasp) -- would likely be enough to provoke these nationalist types.

The JoongAng daily article says the school was in the Suseong District and the map for the school shows the address as Suseong as well.

When I first saw the school name and the webpage I wondered if the terrorists were inspired by the various "American Corners" in large Korean cities. They're run by the US Embassy there, and act as a resource to spread information about exchange and study abroad opportunities in the US.

There's one in Daegu:
https://www.facebook.com/ACDaegu?fref=ts

(I hope the links worked this time.)

The two resemble the Tsarnaev brothers during the Boston Marathon as displayed now in the video captures worldwide. There's the same white and black hats, and the black bags. They did manage to be facing away from cameras, though.

Does it really matter what language the Tsarnaev's or these punks use? They're losers.

Speaking as a Daegu resident, Korean people are basically laughing this off. There's terrorism, and then there are dipshits like the Boston bombers who are stupid fucking children. The guys here could have fucked up a wet dream.

I definitely hope they're caught though.