Part 4: JTBC's "We are Detectives" looks at foreign crime using the KIC report

Last Thursday, March 28, JTBC's crime related talk show "We are Detectives" looked at the pressing issue of foreign crime, and the statistics it used most certainly came from a Korean Institute of Criminology (KIC) report (which contained incorrectly calculated crime rates) which was reported on by Yonhap four days earlier.

Again, here is the promo for the show on Youtube:

As mentioned earlier, the white foreigner we see there is Sam Hammington, who is apparently the first foreigner to do comedy in Korean (according to this article). As the as the caption above reads, the show looks into "foreign crime using statistics!"

This clip is available both at the JTBC site and at Youtube:

The clip has them unveil the top five crimes committed by foreigners, with assault at number one (which is followed by gasps). The host says that if you just go to Itaewon -  but Sam interrupts him and asks why just Itaewon, there’s also lots of foreigners in Hongdae. The host then says that fights between Koreans and foreigners break out due to cultural and language misunderstandings, and the man on the left above says that westerners misunderstood the use of ‘네가’ in Psy’s song Champion, thinking it was ‘nigger,’ and the foreign guy explains that Koreans sometimes misunderstand the use of English (making an example of using ‘fucking’ as an intensifier – ie. ‘I’m fucking tired’ - and saying that it’s not swearing (at someone) in that context.

There are some worthwhile comments by the foreign commentator, but note that when he begins to protest the Itaewon comment, above the main caption of his speech is the phrase “I love Itaewon," and the caption showing his assertion that there are lots of foreigners in Hongdae is followed by a question mark (though I might question that assertion as well). If I was being uncharitable, I might think they were trying to undermine what he was saying. On the other hand, he does add a lot to the conversation.

The next clip (from JTBC and Youtube) continues from above:

The #2 crime is fraud, with Taiwan, Bangladesh and China at the top. Why all Asian countries? A police officer from the Seoul Metropolitan Police sex crime division says that fraud crimes include 1) forged documents for the purpose of illegal entry into the country, 2) fraud involving finding jobs for illegal aliens, 3) fraudulent marriage for the purpose of getting permanent residency, 4) financial fraud such as voice phishing.

At #3 is theft – smart phones, farm machinery, fish, and even laundromat clothing and live fish from aquariums. Im Mun-gyu of the Gyeongju Police Station mentions things like stealing chickens to eat from yards or rice cookers, and then lists theft crimes by type: 1) theft just to survive, 2) specialized theft.

These clips don't show #4 and #5, though the Joongang Ilbo article said that they were sex crimes and drug crimes. This is, to put it politely, horseshit. A look at the crime stats here - which only show the most serious crimes - shows that the order should be 1) assault 2) fraud 3) gambling 4) theft. Sex crimes could be considered number 5, but it's more likely that traffic crimes make up a high number (perhaps higher than theft), but they aren't included in the statistics in that table. (For example, according to Supreme Prosecutor's Office stats, Canadians in 2010 were charged with 401 crimes (not 401 people, but 401 charges). Around 70 of those charges were for traffic related crimes, such as drunk driving, driving without a license, auto management violations and auto accident compensation violations.) The show seems to have deliberately ignored gambling on the list (which is the one I assume they used) in order to include drugs. Because, as we all know, foreigners do drugs, right? Even if in 2011 the drug crime rate per 100,000 was actually 18 for Koreans compared to 21 for foreigners - a staggering difference. There's clearly some dishonesty going on in how the above statistics are being presented.

I should also note that while many of the stats on the show come from the KIC report, the ones we see in the video above are slightly different. For assault (adding together 'assault' and 'punishment of violence' in the KIC report) the show says 7830 vs 7902 in the KIC report. Likewise, fraud is 3549 vs 3623 and  theft is 1766 vs 1785. I'm not sure why this is.

The KIC stats are most certainly used in the next clip (available at JTBC and at Youtube):

The panelists are asked who commits the most crimes. Two people say China, one , Mongolia, one, the US (“Why?” “Because there have been many news reports about crimes by US soldiers lately,” of course). When the list is shown, the inclusion of Canada at the bottom elicits surprise. Sam says it's because there are lot of English instructors from Canada, and the difference in drug culture there sees some arrested for marijuana, which is highly illegal in Korea. [Note – according to stats in the KIC report which show total arrests over 5 years broken down by crime type and nationality (here), drug arrests made up only 6% of total arrests for Canadians. 1/3 of arrests were for assault, and I imagine traffic crimes make up a lot as well.] Solbi then confirms that she is Korean by assuming #2 is Japan (Japan likely has the lowest crime rate of all, which must be hard for Koreans to believe). Sam meanwhile puts Vietnam at #2 and China at #1, and is pointed out for being correct.

And now for more fun is this clip (available at JTBC, in a JTBC article, and at Youtube):

This clip shows the crime rates – that’s right, the ones I criticized here – and the appearance of Canadians at number 3 elicits a great deal of surprise (with a caption reading “Unexpected result!” appearing on screen). When Sam correctly guesses Mongolia is at the top, he’s asked if how he knew (and a subtitle reads “Is Sam a specialist in foreign crime?”). He laughs and replies, “I saw it in a newspaper.” He also adds that this was discussed on the blogs of foreigners living in Korea, and a caption reads “foreign crime is also a sensitive issue among foreigners.” He says that when crimes happen in places like Itaewon it makes the position of foreigners difficult. When one or two people cause a problem, people get upset and think, “Why do foreigners act like that?” [The caption reads, “The problem of some becomes a problem for all"]. They then point out that the Mongolian crime rate is highest of all, even higher than the Korean crime rate. One detective then says that the majority of Mongolian crime is theft and assault, and they have large builds and rough personalities so that even among foreigners there is fear of them, and that there are lots of incidents between them and Chinese. As well, because of their country's culture of fists before law, they have no fear of governmental authority.

He goes a bit over the top on the Mongolians, but it was nice to see Sam point out how Koreans perceive crimes by foreigners. It's also amusing that they are amazed that Sam knows so much about the foreign population - it's pretty amazing, to be sure.


Tomorrow we'll look at some more statistics and perceptions of xenophobia on the show.

Postscript:
Here's the chart I mentioned showing total number of crimes from 2007 to 2011 broken down by type of crime and nationality. Note that, overall, 38% of the crimes fall under 'other,' which likely includes a lot of traffic crimes. It would be nice to know just what percentage they take up. 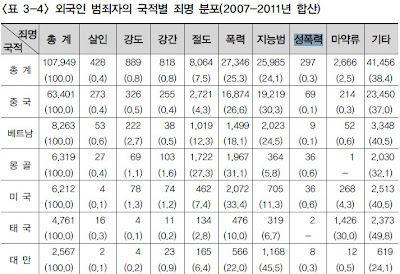 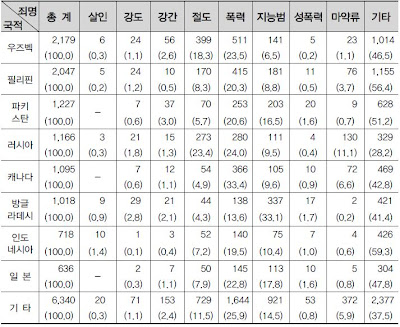 You ought to be able to earn a PhD for your work in sorting out fact vs. fiction in terms of foreigner crime in SK.

Superbly done! Thanks for taking a look at this. My ability to speak and read Korean aren't high enough to be able to look at this myself. I came upon this in response to the Dong A Ilbo article on foreign guys drugging Korean women's drinks.