JTBC's "We are Detectives" looks at xenophobia and foreign crime (2)


Part 5: JTBC's "We are Detectives" looks at xenophobia and foreign crime

Continuing from yesterday's post, today we'll look at some more of the video clips of last week's episode of JTBC's talk show "We are Detectives" which looked at foreign crime. Up first: Solbi takes a look at xenophobia and the reasons why Korea's foreign population has expanded (from Youtube).

'Xenophobia, caused by foreign crime!'
'Xenophobia' is an unconditional hated for foreigners.
Last April the Oh Won-chun murder case in Suwon occurred, and after this there was anti foreigner feeling. The underlying cause of this phenomenon is foreign crime.
In fact, according to police statistics, over 8 years their crime rate actually tripled.
This is because the number of foreigners have increased. Now there is worldwide interest in Korea. The Korean wave has spread throughout the world.
[PD:] So Kpop fever is the main reason for foreign crime?
Uhhh. No.
[PD:] Do you want to look inside the red box?
She pulls out prepared information and reads it: The reason for the increase in the number of foreigners living in Korea is closely related to economic growth. Due to a low birthrate and avoidance of 3D jobs, there is a shortage of manpower, so foreign workers fill those jobs. There’s also marriage, immigration, and foreign students, among various reasons for the increase in the foreign population.

So then: "The underlying cause of [xenophobia] is foreign crime."

I'll allow my readers a moment to stop laughing and pick themselves up off the floor.

Somehow, I doubt that hundreds of years of xenophobia in Korea was due to "foreign crime," though I'll look more closely at this in another post. As well, though the number of crimes tripled over 8 years, the crime rate increased from 1,212 to 1,946 per 100,000, a 62% increase. I was at first thinking WTF when she started talking about the 'Korean Wave,' [or, more appropriately, the 'Globalization Wave'] but was relieved to see her be corrected and accurate information relayed (though its information that doesn't allow for any subjectivity on the part of the foreigners who come to Korea - it's simply said that Korea's economy requires them). Also, I can't help but wonder whether that part with Solbi was scripted or not.

Up next - the crimes that different nationalities tend to commit (from Youtube):

Above they discuss what types of crimes different nationalities commit. The (presumably) detective says that 36% of crimes by Chinese are fraud related, such as voice phishing, [the caption describes this as “a large proportion of crimes by Chinese”], that Mongolians tend to commit assault and theft, and for Canadians, many are arrested for drugs like marijuana [and by many he means, over the past five years, 6.6% - but the fact that something isn’t true shouldn't stop an authority figure from announcing it on television]. Another detective says that Vietnamese who come to the country to earn money steal money for entertainment expenses, and being small they tend to use knives to help them commit crimes, which poses a threat to detectives as well. Two detectives are asked about scary foreign crimes, and I get the feeling this is where the one detective goes on to talk about a foreign English instructor in another clip (which we'll look at tomorrow).

Up next: areas where foreign crime occurs the most (from Youtube):

As for the areas where foreign crime occurs the most, Guro in Seoul comes in at #1, Ansan at #2, and Yeongdeungpo and Siheung in Seoul at #3 and #4. Other panelists say that it used to be Incheon or Dongducheon or Uijeongbu (USFK areas; though Ansan in particular has had a large population of foreigners for at least 10 years). Apparently Sam guessed the top three and when asked how he knew, he says that most foreigners are Chinese or Southeast Asians, and that while Itaewon is often talked about and is represented as a center of foreign life in Korea, the crime rate there is actually lower than one would think. Another panelist adds that the number of crimes in an area is in proportion to the number of foreigners living there. Another detective says that crimes in foreigner-concentrated areas often occur due to fights breaking out between different nationalities. Another detective adds that Garibong-dong, now known as Gasan Digital Complex in Guro-gu, has cheap housing because it used to be a neighbourhood where runaway teens gathered (the 2001 movie ‘Tears,’ about runaway teens, was set there), and it’s gradually become an area for foreign workers, especially Chinese and Korean Chinese. As the area became a ‘foreign town’ and the number of foreigners increased, so did the crime rate. [I’m not sure if it was the crime rate that increased, or just the number of crimes.] There have been plans afoot for more than five years to deal with crime in Garibong-dong by razing it to the ground in order to prevent it from becoming a 'ghetto.'

Up next: Why do foreigners commit crimes? [From Youtube]:

Above it looks at the ranking of the motives of foreign criminals. One person guesses it's for monetary reasons, Solbi says it's due to alienation coming from feeling ignored, Sam says it’s due to money and that he thinks racial discrimination probably won't be on the list. Then the reasons are revealed. At #5, living expenses (5.6%), #4 is carelessness due to mistakes or ignorance (9.6%), #3, unknown (19.7%), #2, accidental crimes, (19.9%), and #1, revenge/retaliation (31.9%). People are shocked at the last part, and a detective says that it’s contrary to expectations. He explains that Koreans may say things like “You just wait,” but for southeast Asians they really mean it, and they will take revenge. So this collision is due to cultural differences. Another detective then says that feelings of being ignored and discriminated against build up, and when they explode retaliation occurs. Then one of the panelists says that in the US and other advanced countries, “we [Koreans] have been racially discriminated against as well.” [Caption: In advanced countries in particular, we also know the sadness of racial discrimination.] He then says, “In truth, we also discriminate a great deal.” He goes on to say that Koreans see westerners as superior but belittle and ignore southeast Asians and Chinese, and a caption at the end reads: “Unfair prejudice leads to foreigners’ resentment. Perhaps we are also responsible.”
-
The idea that they might also discriminate against westerners seems to elude them (though such discrimination pales in comparison to what migrant workers face). That said, the discussion seen in the clip above certainly doesn't engage in the 'blame the foreigner' viewpoint one might expect, though - especially with one particular clip that will be posted tomorrow - it does fit into the 'we treat westerners too well (and must stop this and be wary of them) but are too hard on Asians" theme that represents one form of Korean political correctness (a form that was certainly tested by the Suwon murder last year).


Oh, and it's cute that Newsis decided to post an article yesterday about foreign crime and xenophobia which makes use of the stats and scenarios mentioned in the "We are Detectives" show above but never once credits the show or even mentions the source of the figures (other than 'government analysis'). It has a nice photo, though (of the rules for getting Korean permanent residency superimposed over a photo of women apparently dancing in a nightclub." 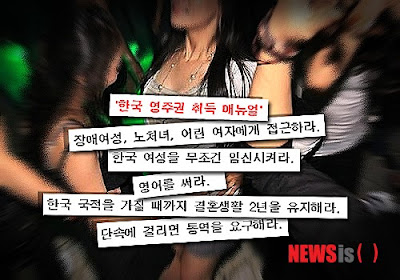 And on the 'most importantly, we have to keep foreign penises out of our brainless women' theme, Newsis also mentions the English Spectrum incident, referring to the way a half remembered version of it was also depicted on the 'We are Detectives' episode. I'll save that for tomorrow.
Posted by matt at 4:22 PM

Nice formulation: "We are racists because members of 'race X' are such no-good criminals."

How can anyone be so proud yet so ignorant of their own history?

Please this is nothing compared to the comments that I get from white men when they see me, a black man, dating a white woman. You should see what they said over a cheerios commercial, A CHEERIOS COMMERCIAL FOR GODS SAKE. god I hate white people

This is what the above comment refers to, though I'm not sure how Youtube users writing offensive, racist comments (you'd think most people would have learned to steer clear of the comments there years ago) about an advertisement and a media organization demonizing a group of foreigners really compare (off the top of my head, here's a better comparison). Not that I imagine anyone who admits to hating an entire race of people particularly cares, mind you.