[Update]
In the second last image below (a table breaking down crimes by types of crimes) I didn't know what 폭처법 was. Looking here, it becomes obvious it's a sort of acronym ('폭력행위 등 처벌에 관한 법률(폭처법)'), or a law punishing violent acts.

A month ago I criticized a report by the Korean Institute of Criminology about foreign crime in Korea after it was reported by the Herald Gyeongje back in February, and now Yonhap has decided to join in a month late. On Monday it reported the following in English:

The number of foreigners apprehended as a suspect in a criminal case increased from 14,524 in 2007 to 27,144 in 2011, while the number of Korean criminal suspects decreased from 2.11 million to 1.87 million in the same period, according to the report released by the state-run Korean Institute of Criminology.

Accordingly, the share of crimes committed by foreigners increased from 0.7 percent to 1.4 percent in the same period, the report showed.

The ratio of foreign criminal suspects with a previous criminal record also jumped from 4 percent to 11 percent in the cited period, the report said, indicating a surge in the number of repeat offenders.

"The crime rate by foreigners in murder, robbery and drug-related crimes has reached a dangerous level," Choi Young-shin who led the study said.

The crime rate by illegal immigrants was relatively low, the report showed.

It also published a report in Korean which is quite similar, though reading it makes clear that the sentence above - "A total of 6,756 Americans, excluding U.S. soldiers and their families, were apprehended per 100,000 foreigners here" - is a mistranslation. The Korean language article says that the US figures don't include USFK and dependents when calculating its crime rate and so estimates the crime rate to be lower.


"The crime rate by foreigners in murder, robbery and drug-related crimes has reached a dangerous level," Choi Young-shin who led the study said.

That's not in the study, so Yonhap must have gotten that comment from him (or not, whatever).

Taking another look at the report, I realized that they didn't accidentally use figures for 'registered foreigners' only when calculating their crime rates - they did it deliberately. They actually pointed out three categories: registered foreigners, short term visitors, and "notified address" (고소 신고), which includes F-visa foreigners (thanks to Paul Kerry for that last piece of information). I could perhaps understand not including the latter groups in their calculations, but only if they also removed the crimes committed by people in those categories, which they didn't. And, off the top of my head, there were certainly F-4 visa holders involved in the drug arrests here and here last year. That the Korean Institute of Criminology knowingly left out those groups suggests they're either incompetent or that they're aiming for a higher crime rate. 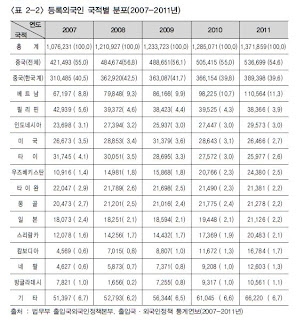 For the curious, here's the list of types of crimes by year.
(category/total/murder/theft/rape/burglary/assault/violent acts/ subtotal/scams/drugs/gambling/etc.) 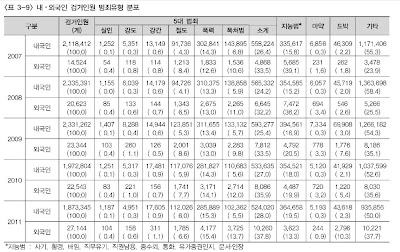