More on the MBC report

I missed this, but yesterday morning, the MBC program 'News Today' broadcast the same report about foreign teachers that I posted about yesterday (with a slightly different title): 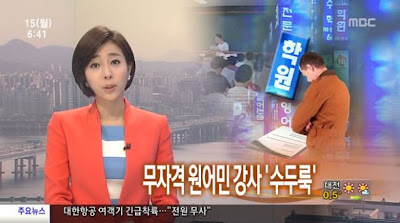 In searching to see if they broadcast it any other times, I discovered the source of the this scene of the "native speaking instructor [who] was caught for secretly smuggling drugs": 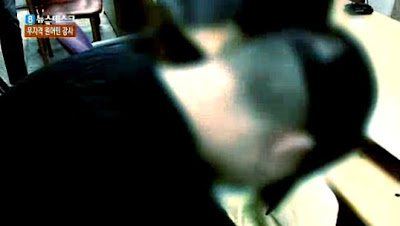 It's from this MBC report from last July which part of the substantial media response to a dozen or so foreigners being busted for marijuana (during which calls were made by media outlets to impose random or hair testing upon foreign teachers - see here and here for more details). The interesting thing about the MBC report from last July is that there's no mention at all of the person in the photo being a foreign teacher; in fact, from the mentions in the report of 'J', the main dealer who was busted, corresponding with images of this person, we're led to think it's him (and he was not reported to be any kind of teacher). So, basically, the MBC report yesterday took an image of a white person arrested for marijuana and declared him to be a foreign teacher, because, hey, the media have done a pretty good job of making that connection over the past few years. (That's not to say foreign teachers haven't been arrested at rates higher than the population; only that the media tends to pay much more attention to them when they are busted (perhaps more than any other group, excepting Korean celebrities).) The interesting thing is, when I did a news search at MBC's site, the report about the drug bust was one of the first to turn up. If I had to guess, I'd imagine it was also the first thing our intrepid reporter came across and decided to use.

So that leaves us with an image of a "native speaking instructor [who] was caught for secretly smuggling drugs" which doesn't show a foreign teacher, an image of Christopher Paul Neil to illustrate another molestation case, a person who admits being on a tourist visa but who is almost certainly not teaching on that visa, statistics with no attribution other than being from the 'hagwon industry,' a mom who is angry about some unstated thing, and finally a recruiter who says hagwons can get around registering foreign teachers. And all of this is tossed into the report with no real rhyme or reason, lacking any kind of point, such as (justifiably) saying that unverified teachers may have criminal backgrounds and be a threat to children.

I'd say that Koreans truly deserve a better news outlet than this, but I'd be unfairly singling out MBC in that regard.

I've been asked by a reader whether I think this sudden spate of reports has something to do with the 'foreigner friendly' former president Lee Myung-bak leaving office (and a grace period following his departure expiring). My answer would be 'absolutely not.' The worst year for negative media reports about foreign teachers was 2009, followed by 2010 - the middle of Lee's presidency. It should also be added it was under his presidency that the National Human Rights Commission rejected petitions by foreign teachers to find the drug and HIV tests discriminatory, and it was also under his presidency that HIV testing for all foreigners was officially lifted - except for foreign teachers.

The reason things have been quiet may be because USFK has been getting a lot of negative attention, but I think it more likely that foreign teachers have simply not been caught doing anything 'wrong.' Most reports, like the aforementioned report about the drug bust last year (which was covered in 30 different media reports), are published because of an arrest. Yes, some outlets (NoCut News in particular, though it's hardly the only offender) like to publish negative reports for the sake of sensationalism, but they usually stem from a crime or other transgression (consensual sex, etc) committed by a foreign teacher. There haven't been any so far this year, apparently, which has just left us with a negative report about foreign kindergarten teachers, the JTBC report (with its unnecessary 'targeting Korean women' clip), and this latest MBC report.

Another question was of how foreign media criticism affects this process of negative media coverage in Korea. Short answer: it doesn't. When the Donga Ilbo interviewed AES leader Lee Eun-ung in 2010, it revealed how it perceived foreign criticism of the group:


It seems that foreign teacher groups and the foreign media have ruled that your “citizen’s group” is a xenophobic group. Why are you receiving such attacks?

Yes - foreign media 'attacks' Korean xenophobes. Another reaction is to feign concern and promise changes and then simply fail to carry them out (as in the case of a promise to pull an anti-Semetic comic from shelves and change it, which never happened), or to make minor changes or a quick non-apology apology. They also might simply ignore it, as the Korean government is doing with the CERD case. In the end, foreign criticism will be simply co-opted or ignored. By that, I mean, of course, criticism not in Korean, though I wouldn't pretend to be optimistic about how much of a difference criticism in Korean would make - it's quite the deluge of media to be heard in.
Posted by matt at 4:14 PM

You seem to have journalistic skills that could employ you in your home country. Why stay in Korea? It doesn't seem like a good country for a non-Korean to live.