On July 10, 2012, the Committee on the Elimination of Racial Discrimination accepted a complaint from a foreign teacher who refused to take an HIV test to renew her contract at a public school in Ulsan in 2009 and lost her job. As of yesterday, six months have passed since the October 10, 2012 deadline for the Republic of Korea to submit a response to the CERD case, and they're continuing their stonewalling in this regard. (Also worth remembering is that the Korean media did not respond to a press release in both English and Korean about the case which was released last summer.) The Committee is supposed to send out three reminders to the state party before the case can be considered without a response, and as far as I know two have been sent so far. There won't be any movement on this front any time soon, unfortunately. Even if Korea were to submit a response tomorrow, due to a number of older cases awaiting consideration, the Committee won't be placing it on the agenda of their next session in August, and I'm not certain when the next session is. At the same time, there may be some developments in the near future.

In related news, a court in China recently awarded compensation to an aspiring (Chinese) teacher for discrimination related to HIV status:

The man, known by the pseudonym Xiao Hua, received 45,000 yuan (£4,600) in damages from the Jinxian county educational bureau in Jiangxi province for being denied a teaching post because a pre-employment health check showed that he was HIV-positive, China's state newswire Xinhua reported.

The CERD case could be the first such case, as far as I know, of such compensation in Korea. It is clear under international law as well as Korean law that there is no distinction between discrimination based on actual or presumed HIV status. If Lisa wins the CERD case, the Committee could very well recommend compensation.


In other news, in late 2012, Tyler Curry wrote an article titled "The Needle Prick: Reluctant Social Commentary of a Newly HIV-Positive 20-Something" at the Huffington Post, and followed it up with another titled "HIV-Positive, Unapologetic and Fabulous" in which he wrote:


I received messages from men across the country who were going through experiences similar to my own. They told me about their fears, the dread that lived in the pit of their hearts and their battles with depression. Weaved within these messages, however, was a sense of hope that maybe they, too, would begin to open up about their HIV-positive status.

I also received a fair share of criticism. Some thought I was flippant, maybe even cavalier in my approach to HIV awareness. Nevertheless, it seemed that these responses stemmed from a similar vein of fear -- fear of forgetting the past. I do not want to forget, by any stretch of the imagination. Instead, I want to pay tribute to those who have lost their lives by embracing the fact that HIV is not something to hide from under the covers anymore, and that we should modernize our approach to prevention.

The Dallas Voice revealed an interesting fact about the writer:


Tyler Curry understands the stigma of living with HIV.

Although he’s healthy and expects his medications to keep him that way for a long time, he spent a year teaching kindergarten in South Korea before returning to Dallas. After his diagnosis last year, he realized he can’t go back.

Well it will, actually, but it likely wouldn't issue a residence card, since the test is required when you submit documents for alien registration. The government said when it lifted HIV restrictions for most visas in 2010 that a positive test wouldn't necessarily mean the loss of visa status, but you'll have to forgive me for not believing them.


Lastly, this case was reported on Tuesday:

SEOUL, April 9 (Yonhap) -- A doctor in Seoul has been found guilty of disclosing confidential information of a patient suspected of being infected with human immunodeficiency virus (HIV), court officials said Tuesday.

The doctor, whose identity has been withheld, was charged with notifying a fellow doctor of the HIV status of the patient last year, in breach of the relevant law that prohibits doctors or other medical personnel from disclosing any medical information on those infected with HIV.

The defendant divulged that a blood test had shown the patient had a high level of HIV, the virus which causes acquired immune deficiency syndrome (AIDS), they said.

The Seoul Central District Court found the doctor guilty and delivered a fine of 200,000 won (US$175), saying that the defendant was willfully aware that the patient had HIV.

The court, however, suspended his verdict, meaning that he will most likely not be criminally charged.

As many teachers on E-2 visas - or in the public school system - have experienced, medical tests which include HIV and drug tests have sometimes become water cooler conversations for their co-workers (a friend had co-teachers mention to him that they'd heard his cholesterol was too high). As per the case above, HIV records of foreign English teachers - whether HIV positive, suspected of being HIV positive or HIV negative - should be private and shouldn't be released to public school officials without express consent from the teachers, but clearly that's not how things work. In the cases leading up to the CERD case, Lisa's lawyer, Benjamin Wagner, made this argument, but it wasn't successful with Korean courts and tribunals, hence the need to take the case to the CERD in the first place. Which, if we remember, is the case Korea keeps ignoring.

This issue is also dealt with in Groove Magazine's latest issue: 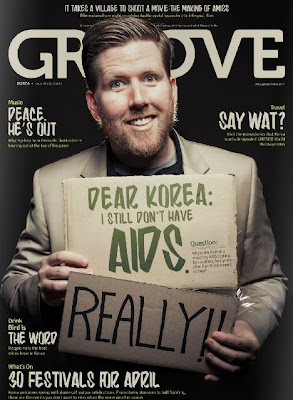 The article is an edited and updated version of the Journal of Korean Law article by Benjamin Wagner and I which was published last summer; the April issue of the magazine can be read online here.

It's sad there won't be anything happening until after August, probably 2-8 months after that? Koreans are really good at stonewalling and the U.N. committee is a bunch of turtles. Two peas is a pod!
I enjoyed the piece in Groove though. So S. Korea will provide an E-2 work visa at the Korean consulate in one's home country, then when the teacher arrives in S. Korea they're asked to take an HIV/AIDS test and if/when results are positive and after Koreans illegally breach test result confidentiality the Alien Registration Card(ARC) would likely be refused even though they say it wouldn't. The S. Korean government can't be trusted that's for sure as they have a history of breaking their promises exactly like North Korea. Marvelous!