Part 3: What is the reason elementary school native speaking instructors get their hands on drugs?

At any rate, I think we can expect calls for random drug tests to be a regular feature of articles about foreign instructors and drugs from now on.


What is the reason elementary school native speaking instructors touch drugs?
[The Reality and Twisted Values of Some White Men, part 3] 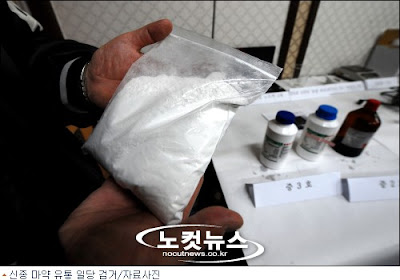 #1. M, a 31 year old American who entered Korea two years ago and who worked as an English instructor in Yongin. In his hometown, A could not break the habit of smoking marijuana and even in our country he bought and regularly used marijuana. A's crime did not stop there. He also supplied native speaking instructors working in Seoul area kindergarten and elementary schools with marijuana, and eventually was caught.

#2. B, a 34 year-old working as a native speaking instructor in a Haeundae area high school in Busan. When B's contract recently expired, he went to foreign countries like Cambodia and bought marijuana, and then transformed into a drug supplier for foreigners in Korea. In May B bought 264 grams of marijuana in Cambodia, enough to get around 530 people high, and sold it to different foreign instructors for 200,000 won for 5 grams. In the end, B was caught by customs at GImhae Airport bringing marijuana from Cambodia, and his crimes came to an end.

As of the end of last year, the number of native speaking instructors (those who have been issued E-2 conversation instruction visas) living in Korea was 22,541.

Police and prosecutors do not have accurate tallies of drug crime statistics for these native speaking instructors, but those on the ground agree that they are gradually rising.

A prosecution official said, "As the number of native speaking instructors increase at private hagwons without a verification system in place, we should see an increase in their taking and trafficking of drugs."

Systemic weaknesses can be found which explain why native speaking instructor drug crime like this is gradually increasing.

According to the revised law on the establishment and operation of hagwons and private lessons which came into effect on October 26 last year, when foreign instructors are hired, a health certificate including marijuana and drug test results must be received within one month of [the visa being] issued.

However there is a flaw in that the drug test in that it consists of only a urine and blood test which can only detect drug use within the previous one or two weeks.

In fact, in A's case, the police investigation found that he had used this blind spot to commit his crimes.

Another cause we can see is native speaking instructors’ lax attitude towards the law when it comes to drug use.

As they think of their home countries which have relatively lenient punishment for drugs like marijuana, they approach drugs easily.

The Korean Association Against Drug Abuse planning and P.R. chief Lee Jeong-sam criticized this, saying, "It's necessary to instill awareness about drug use by conducting random urine testing on all native speaking instructors registered with the Ministry of Education, Science and Technology."

The currently used urine test cannot catch regular drug use and the hair test which can detect relatively common drug use should be implemented but in private institutes the fact is that there is not even one place where a hair test is possible.

Accordingly, a sense of awareness can be instilled by conducting random urine tests for drug use which can catch drug use at any time.

But above all, the problem is that the management system for native speaking instructor drug crime is divided between each institution and there is absolutely no well rounded management.

In other words, there is no sharing system which would gather the capabilities of each institution.

Korean Association Against Drug Abuse chief Lee Jeong-sam, who is responsible drug prevention education, criticized this, saying, "The immigration office manages the entry and exit of native speaking instructors, the Ministry of Education, Science and Technology registers them, there's enforcement by the prosecutors and police, but these institutions do not have anything linking them together."

Lee said, "It's urgent that a 'control tower' consisting of 'one stop' education in regard to suppressing demand for drugs, enforcement, punishment, and prevention be established."


Police and prosecutors do not have accurate tallies of drug crime statistics for these native speaking instructors, but those on the ground agree that they are gradually rising.

We have no proof of this, but they're rising. Why? Because we say so.


A prosecution official said, "As the number of native speaking instructors increase at private hagwons without a verification system in place, we should see an increase in their taking and trafficking of drugs."

Without a verification system in place? Having said that, we can safely ignore everything he has to say, since he has no idea what he's talking about (if he exists, I mean, and the 'journalist' didn't just make up the quote). Ever since an amendment to the hagwon law mandating drug testing of all foreigners working hagwons was passed last June (and came into effect last October), there seems to have been a willful misunderstanding of how these were to be implemented. It's been reported that 90% of the foreign instructors working in hagwons in Korea are on E-2 visas, meaning they were already 'verified,' but since last December there have been cries that most foreign instructors are as yet 'unverified.' Beyond the misunderstanding regarding E-2 visa holders, this was mostly because they hadn't had time to get new criminal record checks and drug tests which the local education offices decided needed to be done again. The new law made it so that these tests had to be re-registered with the education offices, and mandated that F-visa holders should do them as well. Now this confusion in the media (which is either willful or due to ignorance) has led to a prosecution official saying, "As the number of native speaking instructors increase at private hagwons without a verification system in place, we should see an increase in their taking and trafficking of drugs." Nice. Also worth noting is that Rep. Choi Young-hee's original bill that this new hagwon law was based on stated that "the crime rate among native English teachers is getting higher," but when asked about this her office said they had no proof of this. And around and around and around we go.

And again we get calls for random drug testing, without any mention of the fact that drug crimes among foreigners dropped by 60% last year or that there were only nine reported arrests of foreign instructors last year (0.05% of the E-2 population - better get those random tests in place now before Korea's buried under syringes of marijuana!). And this is on top of the drug tests to be implemented for those on E-9 and H-2 work visas, which totals over half a million people. Somehow, I doubt the jump from 23,000 E-2s to 500,000+ E-9s and H-2s is going to go very smoothly. And the blame for that will, of course, fall on those receiving the tests, and not those responsible for carrying them out.
Posted by matt at 11:01 PM