NoCut News published what appears to be the final part of their war on (some) white men last Friday:

The 'Hidden camera sex video' could spread... anxious police, idle university
[The Reality and Twisted Values of Some White Men, part 9] Police: "We absolutely must block the spread of the videos"

CBS NoCut News exclusively reported on the issue of the native speaking English instructor working at a well known private university's language hagwon who secretly filmed sex with Korean women and is keeping around 20 videos.

On the 20th, the ninth article in the series accuses the university of having an idle attitude and being passive in regard to preparing measures to prevent a recurrence because criminal charges have not been determined. [Editor's note]

"With the hidden camera incident, the most urgent thing is to unconditionally stop the spread of the video. If it is taken out of the country by someone and uploaded to a server run by a foreigner, there won't be anything we can do."

The police official investigating the incident of A, the native speaking instructor working at the language hagwon of a well known private university in the Seoul area who secretly videoed sex, stamped his feet.

This is because it's known that A, an American, plans to leave the country after two months, but the investigation is not progressing easily.

Police obtained the problematic videos belonging to A and according to analysis it seems likely he videoed the other party secretly without their permission.

The police official said, "A would be bitter if the other party in the video had given permission to film it, but that certainly doesn't seem to be the case."

In fact, in a message sent to the original informant in this case, A says he got permission and took the video, but she also gets out of him the fact he also shot without letting them know beforehand.

The problem is that for the police to move the investigation further along, the victims' testimony is needed, but the victimized women are reluctant to appear before the police.

The official said, "In the case of the 'secret sex video incident,' it's not an offense subject to complaint and it's possible to punish without the testimony of the victims, but to go through the procedure of stopping A from leaving the country and seizing the original videos, the victim's testimony is absolutely necessary." "Currently we are getting in touch with the women in the videos in various ways but there has been no luck to speak of." 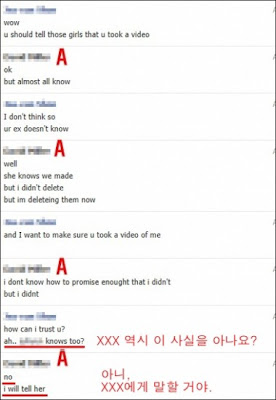 Meanwhile, since the CBS NoCut News report exposed the hidden camera incident involving the native speaking instructor affiliated with them, the well known private university has been turned upside down.

The university language hagwon immediately said, "It seems we should first understand the relevant facts" and "In this process, it seems if the (instructor's) qualifications are not appropriate we can take quick action to stop him."

In fact, the university planned to suspend the problematic instructor A's classes immediately after the first report went out, but that was all.

The instructor's lecturing contract itself was not cancelled first. To cancel a contract the school's 'personnel committee' must be convened, but a news report alone did not satisfy the conditions needed to convene the committee.

The University also did not give a specific explanation to the ten or so students attending the instructor's English conversation class as to why it had been cancelled. Instead of having a different foreign instructor take over the class, the class was stopped and notice was given to the students that due to the 'instructor's personal circumstances,' classes could no longer continue.

In addition, it was revealed that measures to prevent a recurrence had not been formally discussed by the university.

A university official said, "Currently the school is busy with this and that and not able to focus 100% on this." "Among officials, we just talked theoretically about looking for refinement when interviewing."

The school said, "It hasn't been determined that any of the victims were our university's students and the main cause of the police investigation is still an issue, and we think it would be a problem to let students know about this simply because they attended his class.

So, he added, "Understand that banning A's lectures is the strictest disciplinary measure the school can currently take."

As the police's suspicions regarding A are not specific, the university reasons that there is a limit to what they can do.

However, even though police acknowledged that A was under investigation, the facts of a suspected crime cannot be reported to a school or hagwon. The school's opinion is just a flimsy excused to sit idly by.

One wonders if the [reported] police certainty that the videos will spread has anything to do with this. As well, I can imagine NoCut News being all burned up over the fact that "a news report alone did not satisfy the conditions needed to convene the [personnel] committee." I'm also curious what "measures to prevent a recurrence" NoCut News would like to see. Perhaps banning foreign teachers (and students) from owning computers and other electronic recording devices would do the trick? Or if that's too harsh, maybe mandating that a questionnaire be filled out by prospective teachers with questions like "Do you like to record yourself having sex?" would be acceptable?

Also, this "message sent to the original informant" - the female tipster who started this whole mess - is rather interesting, and suggests things not stated in the original article:

Most interesting is "I want to make sure u took a video of me." It sounds like she wasn't merely "an acquaintance of Mr. A". As well, "ah... ----- knows too?" suggests she knows one of the other 'victims', and did not merely contact one woman by "snooping on Mr. A’s SNS." With these things in mind, this comment is rather interesting:

Thru the grape vine this girl was a student, but not "his" student just a fellow class mate, which he was dinging, He is in the shower and in typical jealous korean girlfriend style she is going thru his phone and computer, she finds that he was dinging her friend a half a year ago and they filmed it. The present girlfriend goes into a rage and questions her friend who innocently denies any knowing of this. The friend calls him and begs him to go along with the fib to help salvage the friendship of the 2 girls. and trying to be a good guy lies to the girlfriend...and as typical psycho angry Korean Girlfriends go, She does everything she can to destroy his life...I met him a few times and he he really was a solid friendly guy. ...Such is life.
Funny how the news doesn't get involved in the private lives of Koreans. I hope he sues the girlfriend for lible true or not she did irrefutable damage to his good name. Seen this happen before.

I can't possibly confirm if the above account is true (and the news certainly does get involved in the private lives of Koreans), but the details in the chat above do correspond with it, and it always sounded a little unbelievable that someone would lend out a computer with compromising videos of themselves on it. But if it is true, well, you have to appreciate the irony of a white guy trying to do right by an ex-girlfriend prompting a tale which launches a dozen 'white men are the devil' articles...

There's more to say about all of this, but I'll save it for later. What I should mention is that I just realized KoreaBANG translated two more articles, including the 'Itaewon night scene' story (scroll down).
Posted by matt at 1:57 PM