More on the recent drug bust and MOJ visa regulations

Regarding the drug bust involving foreign teachers reported Tuesday, there have been 30 articles (in Korean) that I've found via Naver searches for '원어민' and '외국인강사'. Despite only 4 of the 11 arrested being foreign instructors, many of the articles refer to 'a lot' or 'a large number' of native speakers being arrested, mainly through the ambiguous construction (often used in such headlines) '원어민 강사 등 무더기 적발' - 'a lot [of people] including (a) native speaking instructor(s) caught' - with the 등 making it unclear how many are involved. This same construction was used in the recent Spice bust described here, but despite the foreign teacher mentioned prominently in the headline, all you can be sure of is that, out of the 12 people busted, at least one was a foreign teacher (and since not even one was referred to directly, 1 might be a safe assumption).

At any rate, Newsis broke the story Tuesday morning with this article:
"A lot of native speaking instructors and others busted for selling and habitually taking marijuana"

The article adds to what is known by saying that J sold a gram to the American Ms S, who was working as a University professor for 150,000 won at a house in Seoul in May 20 and since last August had sold 90 grams to ten people, pocketing 1.8 million won in illicit profits. It also says he would sell 0.8g as 'a gram' to his customers.

Newsis also clearly attended the police briefing, as they posted four photos (1,2,3,4) with headlines like "A lot of native speaking instructors and others arrested for distributing marijuana" to prove it: 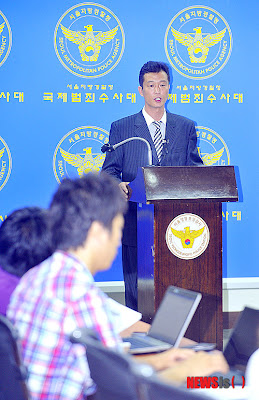 Newsis was the first to print this, in their initial article:

The police official said, "To be hired these people must submit a health certificate and receive a marijuana and drug test from a designated medical institutions, but the hospital urine and blood tests can only detect drugs used one to two weeks before the test, and they exploited this."

Of the 26 articles (not including the four 'photo articles' above) published, 21 mentioned the above statement, and of those perhaps a half dozen went further and called for intensified testing for foreign teachers. Oddly enough, when the new regulations announced in February 2011 mandated that marijuana and drug tests must be carried out at a designated medical institution, this was seen as the final solution to the problem. But then these kinds of solutions, which aim to 'crack down on' or 'eradicate' problems, are pretty common in Korea, and as we are seeing, they are never enough. At any rate, with so many articles repeating it, it can seem like a chorus, when in fact it was one police officer who said it.

At any rate, here are the titles of the other articles:

Herald Gyeongje: "Stoned party by foreign instructors who often cause problems"
[Police official : "Systematic supplemental policies regarding the drug testing NETS have when they are hired should be considered.]

Yonhap: "American English instructor and lots of others arrested for distributing marijuana"

Herald Saengsaeng News: "A lot of native speaking instructors and others arrested for habitually distributing and smoking marijuana and a new kind of drug"

News 1: "Ring which distributed marijuana from overseas in Korea busted"

Seoul Gyeongje: "Acts like these.... the ugly two faces of American English instructors"

Hwan'gyeong TV: "A lot of native speaking instructors and others who distributed drugs caught"
[They "used a weakness in the health test foreign instructors receive when they're hired".]

Kookmin Ilbo: "American English instructor turned out to be a drug supplier... smuggled from overseas"

KBS: "Native speaking instructors who have fallen into drugs... 'weak' supervision" [Translated in my previous post.]
["This is because the drug test instructors must take when they are hired can be passed easily enough if they put their mind to it." [...] Ministry of Justice official: "To have periodic tests without evidence simply because of the risk is an excessive regulation."]

Chosun Ilbo: "Native speaking instructors who habitually take drugs"
["It was found that they can briefly stop taking drugs 2-3 weeks before the drug test."]

The beginning of the above article is pure literature:

30 year-old American Mr. M. In June last year he entered Korea and worked as an instructor in an English academy. Last February he was hired as a native speaking instructor at an elementary school in Seoul, and taught English to elementary school students. He was known to students as the 'friendly foreign teacher.' However, Mr M. habitually took 'hashish,' a drug made from cannabis resin. Mr. M was in a rock band with other foreign teachers, and the band's rehearsal space located near Hongik University in Seoul was a place where they took drugs.

Medical Today: "A lot of native speaking instructors/university professors and others arrested for distributing marijuana"

If you look hard enough, you may be able to detect a feeling of moral superiority on the part of those writing the headlines ( with "Acts like these.... the ugly two faces of American English instructors" being a standout). Meanwhile, "English instructor by day, 'pot supplier' by night" sounds like the basis of an entertaining short film.

In a comment on my last post, dkinsk reminded me that the Supreme Court recently affirmed a trial court decision and ruled, as one article put it, "that estimating the length of time since a person used an illegal drug from the length of the person’s hair is baseless." That article does answer a question from my last post, as it reported that the case was "based on the results of a test of a 4 to 5 centimeter sample of the defendant’s hair," which is 1-2 cm longer than the 3 cm normally taken in the US. The court seemed to suggest, however that using such tests to determine when, how and where the drug was taken wasn't admissible - not that such tests couldn't detect use in general. And besides, if I wanted to have fun, I'd mention this statement given by the constitutional court's Judge Kim Jong Dae in response to the Vandom case:

Mind you, there are precedents which suggest this isn't true at all, but it's probably worth keeping in mind.

I'm also left wondering if the "health checks" the Ministry of Justice plans to impose on foreign workers in Korea starting August 1 - involving tests for "drug addiction, and cases of mental disorders, TB, hepatitis and syphilis" - will include tests for HIV as well. Perhaps not. The process involved, however, sounds familiar. According to this Newsis article, the health checks will involve applicants for non-professional Employment (E-9), ship crew employment (E-10), or Working Visit (H-2) visas to fill out a 'self check' form and then, after entering the country, report to a MOJ-designated hospital for a health and drug tests. This format will be familiar to anyone on an E-2 visa. This is different from the HIV tests E-9 and E-6 visa holders used to take, as those tests were sanctioned by the AIDS Prevention Act of 1987 (which was amended to include E-6s in 1988), which stated that HIV-free certificates were to be issued by a medical center in the sending country of the visa applicant and were to be presented to the Ministry of Health before entering the country, though those who arrived without one could take a test in Korea within three days. What's ironic is that the discourse on drugs (see here for last year's regarding foreign teachers) has apparently reached the point where there's a belief that there's a need drug test all foreign workers, despite the fact that drug arrests for foreigners dropped pretty dramatically last year (according to the Supreme Prosecutor's Office 2011 year-end report) from 858 in 2010 to 295 in 2011. One wonders to what degree the MOJ's experience with the E-2 regulations has shaped these latest ones. To be sure, drug (and HIV) testing by the MOJ has become normalized and expanded for those on E-2 visas over the past five years, and yearly drug and HIV testing of foreign public school teachers has been carried out by the Ministry of Education. 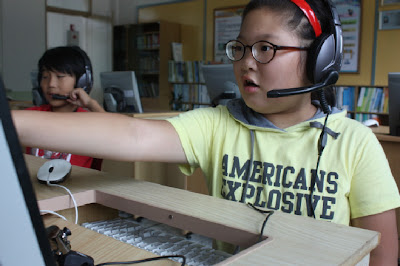 A typically anti-American t-shirt worn by South Korean children.
And you wonder why these foreign teachers want to get high...

[Note: The last three sentences should be taken with a gram of spice grain of salt.]
Posted by matt at 9:09 AM

How the various media outlets are handling this is interesting, as is the connection to any testing required of visa applicants (and visa renewers).

But at the individual level, the most important thing is this: Do not buy, sell, use, or have anything to do with illegal drugs during the time you are living in Korea (including, apparently, while you're visiting another country during your stay).

Ultimately, if you keep your nose clean (so to speak), you will not have to worry about being arrested and deported for this crime.

In the article "Foreigners face tougher criminal, health checks" it states in general for the first time that I'm aware "Visa seekers with histories of violent crimes, such as murder, robbery or rape will be denied entry, the KIS said."
http://www.koreatimes.co.kr/www/news/nation/2012/07/113_114312.html

Suggesting that a "clean record" is one that doesn't involve the above but could include minor or misdemeanor charges like DWI/DUI's, reckless driving etc..., something that has been asked by many a native English teacher for a long time but not answered(by Immigration)?

Matt - In your last paragraph I think you tried linking to something but didn't -
"What's ironic is that the discourse on drugs (see here for last year's regarding foreign teachers) has apparently..."

Kushibo,
"How the various media outlets are handling this is interesting"

What's "interesting"? It's just more of the same xenophobic reactions/treatment by Koreans and the media toward foreigners calling for more testing and claiming many times in headlines there is a serious problem when the fact or 2011 drug report says the opposite.