A stoned native speaking instructor and my child...?!
Foreign instructors should be hired after confirming a drug test but this has not been implemented

On December 8, many members of a group of Korean Americans including Mr. Kim (38) were arrested for forging diplomas in order to work as language hagwon instructors in Korea and for habitually inhaling drugs.

Despite continuous crimes such as taking, distributing or importing drugs by foreign instructors like these, why can they not be prevented in the sphere of education outside of criminal investigations?

Legislation has been made to ban the entry of drugs into hagwons, but in fact it's just empty talk. In addition, it's been pointed out that the educational authorities carrying out enforcement have their hands tied and are passing the buck with their administration.

◇ Hagwons: "A health certificate including a drug test? What's that?"

On December 10th, CBS reporters called a hagwon in Daechi-dong which had posted an job announcement for foreign instructors and made inquiries regarding the documents needed for the application.

The hagwon said, "A passport, degree, and criminal record check are needed." The same was true with a language hagwon in Incheon. Hagwons mostly answered, "Just a resume and diploma is okay" or "they can be hired after submitting a resume and going through an interview."

However, according to the revised law on the Establishment and Operation of Private Teaching Institutes and Extracurricular Lessons which came into effect on October 26, a health certificate including marijuana and drug test results issued within the previous month must be submitted when hiring foreign instructors.

However, CBS has discovered that hagwons are not carrying out the entire foreign instructor hiring process through which a health certificate including drug test results must be submitted.

Even foreign instructor hiring sites openly post that only resumes and application forms are needed and there are many that have no idea about the related regulations nor have any intention of carrying them out.

◇ Educational authorities' hands are tied, "There are no enforcement personnel"

With a situation like this, enforcement by educational authorities is not being accomplished.

An official at an English hagwon in Cheongju, Chungcheongbuk-do, said, "Drug test documents received from foreign instructors are being voluntarily submitted to the relevant education office." "We've never been informed that particular documents should be submitted."

According to the Ministry of Education, Science and Techology (MEST), local education offices which carry out enforcement according to the hagwon law can impose a fine of up to 3 million won for hiring unqualified foreign instructors.

But in reality, local education offices, lacking personnel, cannot enforce this when they don't receive reports from hagwons, and expect that hagwons will voluntarily submit documents when hiring foreign instructors.

A MEST staff member said, "With one or two people, the supervision and enforcement of thousands of hagwons is the difficult part." "The (details of enforcement) are not being regularly reported at present, and if someone feels there's a problem, we can receive requests for action."

An official from a local education office in Seoul complained of the difficulties: "With so many civil complaints over things like the hagwon fee refund issue, we don't have the ability to confirm whether health certificate including drug test results have been submitted when hiring foreign instructors.

According to the "Current status of employed foreigners"report released by the foreign policy division of the immigration service, on September 30, among 600,138 foreigners working in Korea, 22,859 were conversation instructors.

However, with the trend of foreigner-related drug crimes increasing every year, there is a need for thorough measures.

Jang Eun-suk, director of the National Association of Parents for True Education said, "After the hagwon law was amended, there was no feeling at all that things have changed." "Parents are very worried about children still being exposed to drug crimes by unqualified foreign instructors who have not been fully verified."

She said, "You can't help but enforce the law by offering rewards for reporting lawbreakers, and we expect that the 'school snitch system' (학파라치 제도) would have an effect, but due to the resistance of hagwons, it won't be implemented."

Stoned teachers? Check. Worries about them being a threat to children? Check. They're made out to be unstoppable due to inability of Korean authorities to enforce the law? Check. It must be a Tuesday.

So, "Legislation has been made to ban the entry of drugs into hagwons." Because apparently the fiends bring their drugs with them to work. (Though, considering positive urine or hair tests count as 'possession,' I suppose those who toke in their spare time do technically carry it with them at all times.)

We're told that "the revised law on the Establishment and Operation of Private Teaching Institutes and Extracurricular Lessons ... came into effect on October 26." From what I could tell looking at the bill, it was promulgated on July 25; whether that means it came into effect that day I'm not sure. This article seems to indicate only one aspect of the bill came into effect on October 26, that being a system rewarding those reporting hagwons which charge too much (just one of four categories of reports which can be rewarded), but fines punishing the hagwons for such behaviour would be suspended, with full punishment starting from March 1 next year. The article says nothing about other portions of the bill being implemented in October. 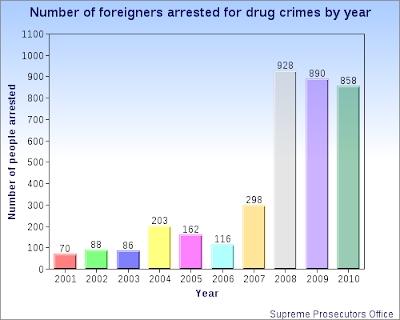 No increases "every year" there. Perhaps the moral of the story is that, when looking for statistics to provide a question to the answer you already have, it's best to shop around.

More amusing is the fact that, when presented with Korean citizens deported from the US after serving time for crimes like rape and murder being able to teach children because they faked their backgrounds, NoCut News thought that the real news story was that one or more of them (along with an Aussie teacher in another case) smoked pot while in Korea. I guess there's a question for SMOE's next survey of parents:

Who would you rather have teaching your children?
A) A person from our country convicted of rape or murder
B) A native speaker who habitually inhales drugs

I'd be curious to see if the response would be similar to what NoCut News thinks it should be.
Posted by matt at 3:17 PM

Why do I get the feeling that when they say hagwons are not following the laws and getting all these checks, only asking for resumes and interviews, what they are REALLY talking about are hagwons who are hiring people under the table, illegally, without proper visas.

If they were hired with a proper visa, Immigration REQUIRES these checks, or they simply don't approve the visa. There is simply no way to get a visa without these checks.

So... why are these hagwons--hiring illegally--not being punished or shut down? Why is it once again the evil foreigner at fault?

If these law-breaking hagwons were shut down, there would be no place for these thousands** of evil drug addicted foreigners to get a job without those checks.


**it is thousands, right? I mean that's the impression I get from all these articles, that Korea is overrun with drug addicts from Canada and California