The other day I posted about a Korean french fry party that had made waves on the internet overseas. The Donga Ilbo is now on the story, having reported about the photo yesterday (hat tip to Kyle): 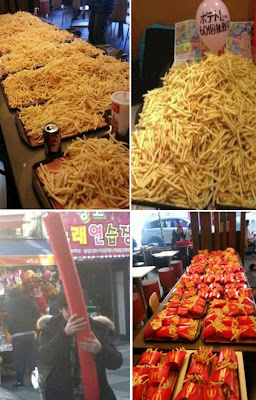 Around 20 teens ordered french fries at a fast food restaurant worth a whopping 270,000 won, and photos of their party posted on the internet have caused shock. The online editions of foreign newspapers such as the Guardian and Daily Mail have reported astonishment at the photos.

The Busan teens who enjoyed the 'French Fry Party' visited a McDonalds at Pusan National University Station on February 23 and had ordered around 150 medium french fries beforehand the day before and spread them across five tables and ate them. They didn't forget to take commemorative photos of things like what they looked like before they started eating and the empty cases afterward.

According to someone who works at the fast food restaurant, "The day before they called and ordered 150 french fries, but we thought it was a joke. It took seven calls before we officially accepted the order and we prepared the french fries beforehand." "The customers spent about two and a half hours eating without any disturbance and shared the leftovers with other customers in the store or wrapped them up and took them home."

In the photos the 270,000 won worth of french fries appears enormous. The trays piled with french fries turned the tables yellow like a mountain covered with gingko trees in the fall. If you're someone who likes french fries, it's something you can imagine doing once.

However, netizens were concerned that consuming french fries in large amounts at one time can lead to heart problems. How much sodium and how many calories were in the french fries they ate?

The foreign press showed concern about the 'french fry parties' held by Korean and Japanese teens, saying that "Nutritionists would be astonished by the photo" and "Their stomachs would really not be happy."

That second last quotation is from the Daily Mail ("It's the new party craze that will make nutritionists despair"). Most of the photos above are from the party in Busan, but the top right photo isn't; as the Guardian noted, it's from Japan: "a group in Okayama upped the ante with a three-hour-long 60-pack feast, which they ate under a specially printed "60" balloon." The Donga Ilbo article also includes this video, which is from Japan. More about the Japanese parties are described here, though the complaints in Japan were that it difficult to meet such large orders in such a short time didn't seem to apply to the party in Busan, where, according to the Donga Ilbo, they called ahead of time. And unlike the foreign news reports which described the "brats" being told to get out by store staff, they apparently didn't cause problems and shared with other customers. Where exactly the 'kicked out' part of the story comes from, I don't know. The earliest source I can find is this one, which doesn't mention anything like that. Odd.

Oh, and I guess I was wrong about it taking place in Gangnam...
Posted by matt at 9:45 AM