"If they're white, it's okay?" Lots of English instructor frauds...

Fifty posts! I never imagined that when I started this a year ago...

On February 17, the Donga Ilbo published the following story:


"If they're white, it's okay?" Lots of English instructor frauds... 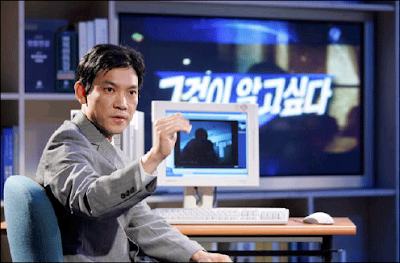 If you attend a hagwon there are foreign instructors who display terrible ability. Recently there was controversy over foreign instructors' moral qualifications after the post 'How to lure Korean women' was posted at a foreign English instructor internet site.

On the 19th at 10:55 pm, SBS's 'I want to know that' will deal with the actual conditions of foreign English instructors' illegal employment.

Foreign English instructors' qualification conditions are that they be citizens of a country which uses English as its native tongue and graduates of a 4 year university. They must receive a work visa and be invited by a hagwon, and instruction outside of the relevant hagwon is illegal.

However, the supply of white instructors cannot catch up to the demand for them, which mass produces illegal instructors. Hagwons pay 1.5 million to brokers and hire white instructors illegally. This fee is the main reason for the rise in tuition.

People who are unqualified are hired as instructors. The production crew confirms that there are foreign instructors who openly teach on tourist or student visas or who have only graduated from high school or a two year college and have forged university degrees. If they pay $100 or $200 they can get a forged degree from a famous American university at internet fake diploma websites. In addition to their income from the hagwon, there are instructors who also teach illegal private lessons and make between 50,000 won and 70,000 won per hour. They easily earn money and then go travel in southeast Asia.

Producers also plan to put out informants' testimony about instructors who sexually assault students or offer marijuana to students.

PD Jang Gyeong-su said, "I hope this will be a chance to take a look at the dark aspects of our society caused by our obsession with English education and the racism which prefers white instructors, and the authorities' careless supervision system."

On February 18, the Kyunghyang Sinmun listed the upcoming show in its TV coverage:


[Noteworthy programs] February 19, 20
Behind the obsession with English education and the preference for white people
▲ I want to know that, SBS, 10:55pm

Photos of whites mixing with Korean women posted at a foreign English instructor job site at the end of last year, followed by the post ''How to lure little Korean girls,' shocked many people. However such a thing has actually happened at some English hagwons. By looking at the actual situation of unqualified foreign instructors, [the program] reports on the dark aspects of our society spawned by our obsession with English education and preference for white people.

Also on February 18, the Hanguk Ilbo also drew attention to the show in its TV coverage, placing it at the top of its list of shows to watch that night:

Not long ago, the post 'How to lure little Korean girls' was put up at a foreign English instructor site and caused controversy. The report finds that at some hagwons, this has actually happened. It accuses foreign instructors of actual misdeeds such as offering marijuana to students or sexually assaulting a middle school student.

Beware the 'Ugly white teacher,' indeed. It's interesting that, of the four articles mentioning the show prior to it airing, three mention 'white' in the title.
Posted by matt at 4:18 PM

Just wondering...whats' the purpose of posting all this stuff again? This is 8-9 years old.

Again? Other than several paragraphs translated and articles summarized at the Marmot's Hole at the time, translations of the vast majority of these articles have never been posted. As for the purpose, this is where the media began to turn against foreign English teachers and treat them as they'd been treating GIs for decades. It also led to to the formation of Anti English Spectrum, who successfully lobbied the government for drug and HIV tests for E-2s, drug tests that have now been expanded to half a million foreign workers. Despite this, it wasn't a monolithic process, and the articles show that there was criticism of AES and media coverage of this event by Koreans as well.