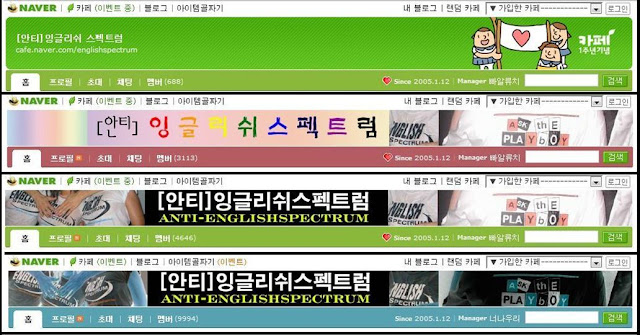 By early February the header had changed to the latter one, and included a new message and a changing gif image: 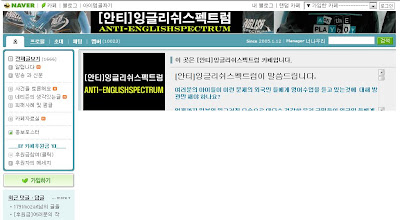 The message was shown in the SBS broadcast of February 19: 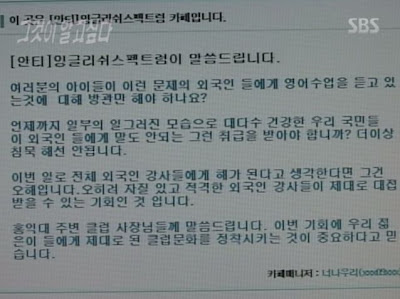 Here is a translation of the message above, signed by the new cafe manager, 너나우리 (You me we):


This is the [Anti] English Spectrum cafe.

Should you just sit idly by as these problematic foreigners teach your children?

With the distorted aspects of some, for how long should the majority of our healthy citizens give foreigners such ridiculous treatment? We should not be silent anymore.

A word to the the owners of Hongdae area clubs: We believe it is important to take this opportunity to establish proper club culture among our youth.

Report immigration crimes such as the employment of unqualified illegal foreign English instructors: 1588-7191

I imagine the NIS must have appreciated any calls it got. In late February the same message still stood on the site, but with links to the following shows listed:

It was also signed by a new cafe manager, 돌쇠(rightenglish) ('You me we' didn't seem to last very long). Original founder Bbaallyuchi would return as manager in early March of that year, but would be replaced again by 돌쇠(rightenglish) by May of 2005 (and who is currently the manager of the (pretty much defunct) cafe, having taken over after M2 (Lee Eun-ung)'s reign of 2006-2011).

The gif on the front page shows these images: 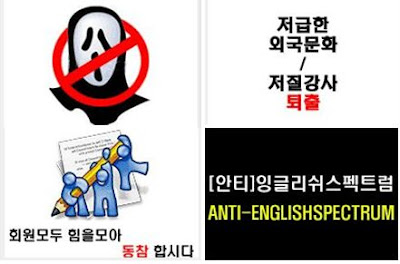 I guess the image without any writing is supposed to say 'No scary white-facers.' The line "Expel vulgar foreign culture and low quality instructors" is reminiscent of both Park Chung-hee's mid-1970s attacks on foreign (read: American) decadent culture and the nationalist left's attacks on 'low-quality American culture' and AIDS-infected GIs at the time of the 1988 Olympics. Needless to say, Anti-English Spectrum's xenophobic outlook didn't come out of nowhere.