Statistics on foreigners in Korea, and the ROK before the CERD

I've written two posts (here and here) about the ROK being taken to the CERD accused of racial discrimination over HIV testing of foreign English teachers.

This year the Republic of Korea submitted its "Combined fifteenth and sixteenth periodic reports of States parties due in 2010," which can be read here. The report has lots of interesting statistics, including those on naturalized citizens, foreigners, mixed race marriages and children, and refugees, some of which I'll reprint here:

Here's a table illustrating this by year (click to enlarge):

Number of foreigners compared to Koreans by year (note that it says 'foreign residents' but those figures include tourists):

The number of documented and undocumented foreigners: 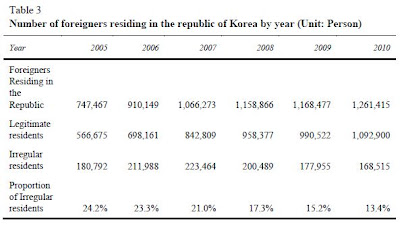 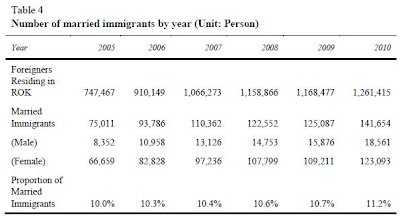 Although no statistical data has been kept regarding children born from inter-ethnic unions at the State level, the Ministry of Public Administration and Security has been able to accumulate data on the subject by incorporating a survey on foreign residents' children (under foreign parents, foreign-Korean parents, naturalized Korean parents) with the 'Study on the Foreign Residents by Local Administration,' which has been conducted annually since 2006.[...]

Since Korea joined the Convention Relating to the Status of Refugees in 1992, a total of 2,915 persons have applied for refugee status by December 2010; 222 of them were recognized as refugees3, and 136 applicants were granted stay permits on humanitarian grounds. 258 applications were reviewed in 2010, and 424 applicants still remain on the wait-list as of December 2010. Since the establishment of the Nationality and Refugee Division in the Ministry of Justice in February 2006, the number of recognized refugees and those granted stay permits on humanitarian grounds increased significantly. The yearly statistics from 2006 to 2010 are as follows:

For more on the early years of accepting refugees, here's a post I wrote in 2005.


Now, submitting the report these statistics are taken from was only one step in a process states who are party to the Convention on the Elimination of All Forms of Racial Discrimination undergo. For the next step, on August 22 a delegation from the Republic of Korea presented the report to the Committee on the Elimination of Racial Discrimination, who then asked questions about the report regarding how the ROK is implementing the provisions of the Convention. The ROK then had a chance to answer some of the (many) questions which were asked.

At one point, Anastasia Crickley, the Committee Member acting as Rapporteur for the Report of the Republic of Korea, asked


I understand also that there has been a lifting or a proposed lifting of the requirement of mandatory HIV testing for all foreigners, and I would be interested to know something about this – which foreigners does it apply to, why, from where, and in which circumstances?

The ROK chose not to provide an answer to this, which is interesting, considering that the ROK has a complaint pending on that very topic before the Committee.

This isn't the first time such a question has been evaded by the ROK. In May 2008, the ROK took part in the Universal Periodic Review before the UN Human Rights Council (in which the domestic human rights records of all 192 UN Member States are reviewed every four years) and were asked by the UK about HIV testing for the E-2 visa:


Some visa categories, notably ‘E-2 Teaching Foreign Languages’ ask applicants for their HIV status, and there have been reports of foreigners being deported because of their HIV status. Does the ROK Government consider this to be discrimination and, if so, what measures will it take to address this issue?

No answer was given to this question, however.

As for the CERD meeting of two weeks ago, this was but one of many topics that were brought up, and there are lots of interesting questions asked. A summary of them can be found here, while video of the nearly six hour meeting can be watched and downloaded here.
Posted by matt at 8:33 AM

It appears that S. Korea will just ignore the CERD. Why would they respond when they don't know how without looking or sounding stupid? I doubt they ever responded to the U.N. General, they're very own Ban, Ki-moon when he suggested they stop discriminating against native English teachers(requiring HIV/AIDS tests) so nobody really expects them to respond to anyone else connected with the U.N.do they?

From the CERD meeting summary "Today’s conversation would be concerned with ‘rights realization’, in particular with regard to the Convention, as a basic for a peaceful and successful society. The State party’s enactment of the Refugee Act, which would come into force in 2013, was noted, as were new employment legislation for migrants, although the visa system was often very confusing."

I don't think anyone from Korea Immigration Service or elsewhere could explain Korea's visa system?

to be fair, if you watch that video there was a huge number of questions asked (like 20 minutes worth), and i'm sure this wasn't the only one that wasn't answered.
i had no idea that the u.n. was that thorough in it's analysis of whether or not countries have followed the CERD guidelines, or that it had meetings like this in the first place. given everything that the government has to work on, i can sort of understand them not paying too much attention to HIV testing. i think resolving the issue of stateless children, for example, deserves a lot more attention than whether we foreign teachers are offended by a policy or not.