As James Wade introduces these columns in his book One Man's Korea,

Ever since the middle of 1964, I have been receiving at my office weekly visits from a flabby, furtive, rat-faced character who thrusts in front of me a few illegibly scribbled sheets of foolscap headed "Scouting the City." These sheets I have duly edited and transcribed into the Saturday column which has attracted various kinds of attention in The Korea Times from August, 1964 to date.

The shabby little man who thus entrusts to me his literary effusions calls himself Alf Racketts, and claims to be the illegitimate offspring of a retired geisha girl and a certain foreign columnist in Japan. [...]

[D]espite the repeated predictions of friend and foe alike, Mr. Racketts has yet to be deported, quizzed by the CIA, or tarred and feathered and rolled in kimchi.

Quite a few of the articles in the book deal with him criticizing western perceptions of Korea. This article, however, makes you glad that today we only have to deal with the visual 'clangor' of neon crosses, and not the aural assault described below: 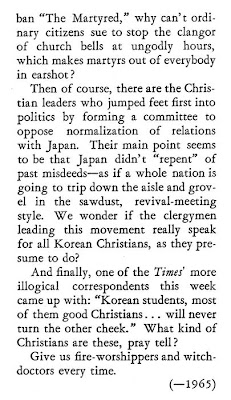 Couldn't help chuckling at his dig at the Times. In that vein, there are a couple limericks in the 1971 book Chosun Limericks (which Wade edited and contributed to) which poke fun at the Times headlines, such as this one: 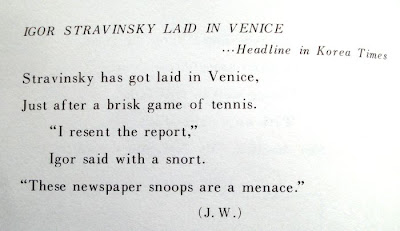 Some of the limericks are more off-colour than others, but I'll save them for another time.
Posted by matt at 8:56 AM

Any idea where I can get a hold of that book?

I found a used copy (of One Man's Korea) at Barnes and Noble, but both of his books (and other collections he edited, like the limerick one) can be found at Yonsei University Library. At least two of them (maybe all) are only in the Underwood collection on the fifth floor, which is only open til 5pm weekdays and not at all on weekends, which can make it difficult to visit if you have a 9-5 schedule.