Came across this image last week. Despite the 'I couldn't decide what to wear so I put on everything I own' look, you do get a sort of punk-ish, 80's vibe by the looks of them. If you were expecting some edgy electro-punk, however, you'd be disappointed:

At an event hosted by the Ministry of Justice on Tuesday to launch a volunteer group for the G20 Summit in November, the band announced a campaign song to encourage people to abide by the law.

"We'll try to set examples by obeying rules, even minor ones, as citizens ourselves and work to raise awareness about problems with writing malicious comments on the Internet and illegal downloading," 2NE1 said.

As Bill Hicks put it, "Government approved rock and roll - now we're partying!" I read somewhere yesterday that the government was thinking of using girl groups as part of psychological warfare against the North. How cruel. So much for the "We are all one race" line (though using celebrities in propaganda has gone on for some time).

I came across an article from 1975 as the government started banning rock music, like Shin Jung-hyun (below, from his days playing on U.S. military bases). 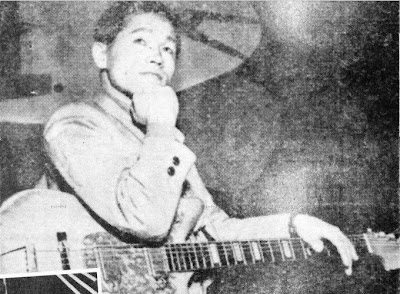 What's interesting is that the 'group sound committee' decided to organize a concert with several rock groups to promote 'wholesome music' and promised to play Saemaeul songs. Obviously, despite the repression, they wanted to keep making a living and playing music, so they made concessions (had they done this under a previous administration, they would be called 'pro Japanese traitors'). Those were repressive times, however, so one can understand why they would take a 'wholesome' stance. I doubt the music 'artists' of today have such pressure on them, however (though the under-18s may soon have to stop wearing hot pants, which will make the Chosun Ilbo cry, as it will use any excuse to post pictures of them).

By 1976 many musicians and entertainers would be arrested (for smoking marijuana, which up to that point had been illegal in the way that prostitution and abortion are illegal) and banned from performing or having their songs on the radio or tv, and so the late 1970s, as Shin Jung-hyun describes it in Mark Russell's book Pop Goes Korea (excerpted here),

was the start of the bubblegum pop and syrupy ballads that have ruled Korea ever since. “It was all, ‘Let’s work hard,’ and ‘Let’s be happy’ kind of stuff,” Shin says, with a soft, matter-of-fact bitterness. “It was completely physical, with no spirit, no mentality, no humanity. That trend has carried over all the way to today, so people are deaf to real music. They don’t know because they are never exposed to it.”

There's lots of good indie rock, pop, folk, and electronic music being made in Korea, but as Shin puts it, few are exposed to it. Here's an ad for Shin's last group before he was arrested, the yeopjeons (coins, or 'copper cash'): 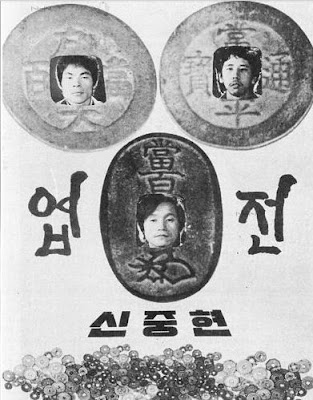 I hadn't known that's what those Joseon dynasty era coins were called. Here's a photo of correspondent Robert Dunn standing on the massive pile of them that he received when he changed over $100 US dollars at the start of the Russo Japanese War in 1904 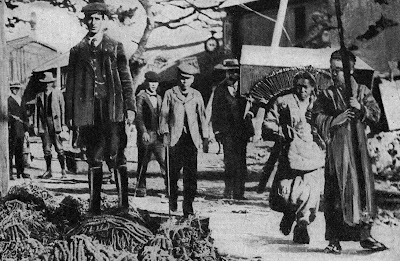 It was handy that I learned the word, as a few days later someone asked me about the coins saying she wanted to track some down in Insa-dong, and I was able to give her the name of them. A few days after that I came across this discussion at Dave's ESL Cafe about the oldest Korean coins people have come across, and while most talked about coins from the 1970s or perhaps 1960s, a few posters described the yeopjeons they had found. It's an interesting discussion, and worth a read.
Posted by matt at 8:51 AM

is there a reason that you don't include korean cultural trends in wider discussions about global trends in the issues you raise?

you write about korea as if it exists in a cultural vacuum. some of the cultural elites from the old guard might like to think so, but the truth is radically otherwise.

Probably because it's a blog about what is and has been going on in Korea, and not the rest of the world. I have connected things before to Canada or Japan, and will most certainly make some connections between the U.S. and Korea in an upcoming series (of which this post is a bit of a teaser), but my focus is often on Korea. Of course, the nice thing about having a comments section and trackbacks is that others can make connections and add to what I've researched or written.

But your pov is not Korean. So, what goes on in Korea, for you, is a perspective about the rest of the world, to some extent.

That's my point, and i'm you sure understand my critique, whether or not you agree with it. You treat your ideas as if they are the same or should be treated as the same as the folks your learning about. (See my comments from this morning that were deleted. I assume by you.)

My point isn't that you need to include discussion of other cultures. It's that you seem to speak from a position of authority that you simply don't have. I want to ask: is it academic, voyeuristic, simple curiosity? At any rate, its other and often white, in my opinion.

I think, for it (the discourse,) to be honest it needs to be a little self conscious and address where it's coming from. At least some concern for authenticity in care for the culture you're being so authoritative about. Otherwise it reads like Himmelfarb- or Noonan -esque interpretations of culture and history and becomes rather overtly political.

As I've mentioned before, I'm genuinely interested because I like to read your blog. I've been thinking these things because I, too, take an interest and am seriously addressing how we write about Korea.