[Update below regarding Customs statistics] 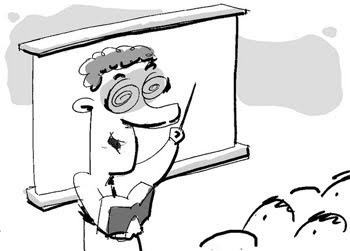 That's the main idea of a Gyeongin Ilbo editorial from yesterday titled "Opium eater Native speaking teacher," which describes many instances of drug smuggling world wide from places like Mexico, Columbia, Brazil, and the Netherlands, and tallies the cost of this horrible practice: 22,700 dead in the drug war in Mexico, others killed in a shootout at Carnivale, and grandmothers and young children used as mules. It then relates that drugs "literally paralyze the mind and body" and that two needles of opium could drop a bull. The last two sentences?

Yet in Korea, the bewildering thing is that 30% of drug crimes by foreigners are committed by native speaking teachers. Entrusting foreign language education to opium eaters and opium addicts is extremely dangerous, and that education will also not be [carried out ] properly.

As far as applying this to all drug crimes, it's ridiculous, as Thais have the market cornered on the most drug busts among foreigners. However, if it's referring only to drug smuggling (which, though it does not literally say so, from the context of editorial, I imagine it is), then it may be in the right ball park.

According to information in this post and this comment by Ben Wagner (who took the statistics from here), if we ignore our skepticism for different sets of statistics coming from different sources, the number of teachers busted for drug smuggling (from the National Tax Service) is tacked on to the Supreme Prosecutor's Office's stats:

The Korea Customs Service, on the other hand, provides statistics that are a bit different, but which refer specifically to foreign teachers: 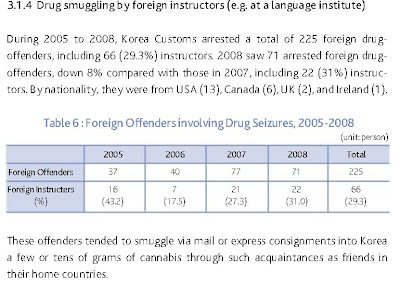 Perhaps this is the source of the '30%' figure. If I had to trust any one agency in regards to this, I think Customs would be it (as opposed to the National Tax Service (?)). Note that they describe this smuggling as "a few or tens of grams of cannabis" sent "via mail or express consignments."

However, while the figure of around 30% seems to be correct, this does not take into account who is considered a foreign English teacher (E-2? F-2 and F-4? Someone on a tourist visa who once worked as a teacher, or who was teaching privates? Who knows?), and also ignores the fact that last year less than 0.1% of teachers were arrested for this. 99.9% weren't caught smuggling, but who cares? And I've never heard of an opium arrest involving teachers, but lets call them opium eaters (all drugs are the same, right?), and say they are a danger to foreign language education in Korea while we're at it - there's a nonsensical editorial to be written!
Posted by matt at 8:19 AM

Sent a little email to the webmaster.

Smugglers include people who just had something mailed to them.

I remember a former co-worker accepted a package without looking at who sent it and he was immediately arrested. He said he didn't ask anyone to send it (plausible but doubtful). I wouldn't put it past some people (AES) to plant evidence like that though...
Just be careful what you accept and sign for in this country.

The co-worker managed to avoid the charges because his system was clean of any drugs, BTW. Perhaps that is an admission by the system that some people are set up?