As mentioned at the Marmot's Hole a few weeks ago, on September 21 NoCut News reported on the release of new crime statistics for English teachers - statistics which are quite different from the ones Rep. Lee Gun-hyeon released last year.

It has been revealed that the number of crimes by native speaking English teachers living in Korea have increased every year, an urgent situation [that calls for] the formulation of verification procedures.

National Assembly Budget and Accounts Committee and GNP member Lee Jeong-Hyeon revealed that, according to a submission by the National Police Agency, 600 native speaking English teachers had been charged for various crimes since 2007.

By crime, 224 were charged with assault, 159 with immigration violations, and 91 with drug crimes.

"To increase confidence in the hiring of foreign English teachers, urgent preparation of verification procedures to block crimes in advance should be a priority," Lee said.

Oddly enough, NoCut News was the only news outlet to report on this, but then failed to use these statistics in the piece I posted yesterday, using Lee Gun-hyeon's instead.

Now, it's hard to know what 'English teacher' actually means, but if it does include F-2 or F-4 visa holders, then it's impossible to know what the total number of teachers would be when determining a crime rate. So, like last year, I'll compare the number of crimes with the number of E-2 visa holders. These new statistics then give us the following annual crime rates:

According to these statistics, there has been 5.9% increase in crime by foreign teachers over the last three years. Will this "growing social problem" never end?

For more along these lines, ROK Drop has an excellent breakdown of crimes by US soldiers in 2009 here.

Anti English Spectrum was, of course, all too willing to take credit for these statistics. 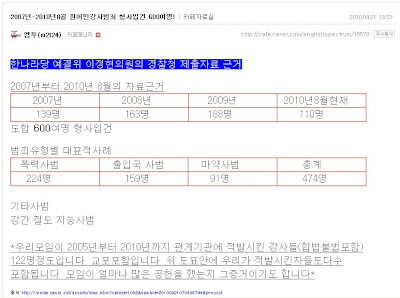 "From 2005 to 2010, 122 teachers (legal and illegal) have been caught by related institutions due to our group. This includes gyopos. The chart above includes those we caught. It is evidence of what a contribution our group has made."

Just for fun, it might be worth pointing out that during the two week period between September 29 and October 11, 36 negative articles about foreign teachers were published in the Korean-language media.
Posted by matt at 3:58 PM

I love the "block crimes in advance" part. Again, Korean expectations of one crime is one too many is an unfair burden put onto the shoulders of over 20,ooo people. I think we should apply these standards to these politicians. What's their crime rate? They don't have any moral authority to be talking about such things.

what's this evidence of?

that AES is a hate group? (i agree.)
that the korean media is not professional and does not care much about fact-checking nor real research? (i agree.)

if so, then you proved your point many posts ago.

i'd like to understand the point of the posts. is it simply to collate the number of times somebody trashes foreign labor in Korea and archive it?

are you trying to use these examples to express something you believe about Korean culture and Koreans themselves? if so, what is it you're trying to express?

I just want to clarify, that I do believe we'd probably be in much more agreement than not if we talked in person, Matt. I'm not trying to be conspicuously critical of your blog.

I've been trying to think about how we write about Korea and what that means about us and Koreans--trying to consider what the discourse actually represents.

One thing I do know is the AES and popular Korean press does not represent the actual discourse--its imaginary, symbolic and real components--in any useful manner.

The problem with the anti-foreign element in Korean nationalism is that for it to be at all potent, the goal must be to annihilate foreign presence. This makes the movement less practical than it ever has been since surely Korea and Koreans do not wish to withdraw from the world having worked so hard, in every conceivable manner, to become a first world country in such a short amount of time.

So I'm stumped at the moment to come to terms with what groups like AES hope to do in reality? Know what I mean?

On the other hand, I understand much of the foreign, especially American, response to Korean xenophobia. White Americans tend to believe they belong anywhere they are and have a since of privilege built into there real experience that is often left unexamined and unconscious. (Not accusing you here, just pointing out my view.)

I think as teachers we need to figure out a way to both assimilate more into our job culture and community as well as work to demand more respect from our employers and their culture. Doing both at the same time is difficult and certainly not help nor encouraged by much of the foreign teaching population that is not hear for what I believe are the right reasons. This is the fault of both employee and employer, in this case.

Anyway, have to teach. Look forward to future conversation and your next post.

By the way, I like your other blog too though I haven't seen a new post in awhile...

Gary Norris, what he is doing is providing some facts and forming the basis for any discussion about English instructors and crime in Korea. I find it very valuable. If I didn't know better, I would think the crime rate would be 5-10% based on the media and politicians.

taemin:
You're right - I was meaning the difference between the two figures was .05(%) - the problem is dealing with percentages. It would make more sense if I said it increased from 78.4 arrested per 10,000 teachers to 83 arrested per 10,000, an increase of 5 (or 4.6) teachers over three years. I'll change that.

Gary Norris:
Heading out the door in a moment, but will reply tomorrow. I appreciate the comments - no worries there. If you ever feel like meeting in person, let me know - I'm sure we'd get along fine simply on the basis of musical tastes!

Brent:
Basically, yes, you've summed up my aim - but I'll expand more on that later.

Mr. Norris explains that he has "been trying to think about how we write about Korea and what that means about us and Koreans--trying to consider what the discourse actually represents."

The goal of National Assembly representatives like Lee Jeong-Hyeon is, as he states,

"To increase confidence in the hiring of foreign English teachers, [through the] urgent preparation of verification procedures..."

The "discourse" is political and legal and what it “actually represents” for foreign teachers (such as those on E-2 visa) is being subject to enhanced "verification procedures" (as has occurred several times in the past years) because, as the article in question alleges, “the number of crimes by native speaking English teachers living in Korea have increased every year [have created] an urgent situation” that requires such enhanced "verification procedures".

The blog post does a good job of attempting to continue this discourse by critically examining the data put forward to support the accepted premise that crimes by native English teachers are at dangerous levels and “ever-increasing”. As the post makes clear, there are lots of problems with the data, for instance, what’s a native speaking English teacher? If the bulk of the offenses are immigration related, as the data shows, does this mean that foreigners have been charged with teaching English without the proper visa and now native English teachers with the proper credentials and legal status will pay the cost by undergoing further “verification procedures” in order to give the Korean public more “confidence” in them?

These confidence-building “verification procedures” are well understood. They involve medical testing for sexually transmitted diseases, primarily HIV/AIDS, and for the use of illegal drugs (i.e. the TBPE test).

What enhanced “verification procedures” have thus far entailed is also well understood: increasing the frequency of the AIDS and drug testing (from a one-time requirement to an annual requirement), intensifying the scrutiny of the tests (e.g. from TBPE drug tests to TBPE tests and drug tests for cannabinoids) and the broadening the scope of test subjects (e.g. from foreign teachers on E-2 visa to other visa categories of foreign teachers, such as F-2 visa holders).

Mr. Norris asks what all this “represents in reality – [in] real Korean culture?”

What it represents is tens of thousands of non-Korean non-citizens (E-2s alone account for over 22,000 people) who live here in “real Korean culture” having to report to real Korean hospitals to really have their blood and urine examined for deportable substances. To put this in terms of Korean legal discourse, it means people will be subject to suspicionless searches (as the Constitutional Court has made clear, 2005 Hun Ma 277), on the basis of race, in violation of their rights under the Constitution (i.e., Arts. 10, 11, 12).

Mr. Norris mentions that “AES and [the] popular Korean press does not represent the actual discourse . . .”

AES was a participant in the MOJ planning session for the first round of E-2 "verification procedures" in Oct., 23, 2007 that resulted in AIDS and drug tests for foreign teachers.

As for the popular press, the article in question and many others like it feature statements on the alleged criminal behavior of “native English teachers” by National Assembly representatives, police officials, and education officials whose goal is to gain support for and put in place very real legal measures that will directly affect these teachers.

We have already seen the results of such discourse in the form of race-based suspicionless blood and urine tests for non-Korean teachers, which strongly demonstrate how “actual” this discourse has become in “real Korean culture”.