NoCut News continues its fair and unbiased reports on foreign English teachers (such as here, here, and here) but instead of connecting separate cases and declaring there to be a "growing social problem," this article, from October 11, declares that because of endlessly occurring "deviant and criminal behavior" by foreign teachers, a system requiring verification of a teachers' moral standards is needed:

There needs to be a hearing on Native speaking instructors 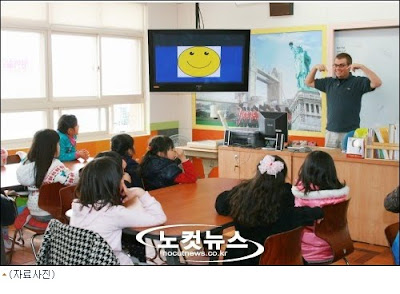 As the demand to study English increases, the number of native speaking instructors working in Korea greatly increases every year. However, problems with their qualifications are also never ending.

In particular, an English Village instructor in Daejeon recently filmed and spread a video of sex with a Korean woman, bringing the need for a comprehensive inspection in the hiring process of native speaking teachers to the fore.

According to an English Village in Daejeon on the 10th, a foreign instructor who worked there, A (26, American), shot a video of himself having sex with a Korean woman and uploaded it onto a foreign adult site.

The teacher had worked at the English Village since May of last year, and taught kindergarten and elementary students five hours a day, four days a week.

It has been exposed that after posting his profile on a friend finding site, A looked for women, and filmed the women he met.

The video was removed from the site A uploaded it to, but the video and screen captures of it are being spread on various online communities.

Regarding this, an English Village official explained that, “In order to get an E-2 visa, which is needed to employ native speaking teachers, there had to be no crimes [on his criminal record check], and during his employment there were no particular problems,” and “We confirmed the truth, and he is currently no longer employed.”

However through the stir caused by this video [it can be seen] that, for the company contracted to operate the English Village and the local governments that manage them, it’s difficult to avoid problems with poor management of instructors.

An English village official said, "If discussions are necessary, then [we will] apologize to parents and students," and “to prevent a recurrence, measures such as strengthening ethical standards during the recruitment process and carrying out ongoing training will be prepared for native speaking instructors."

Such deviant and criminal behavior by native speaking teachers has been occurring endlessly, and is persuasive [evidence] that there is a need to prepare a comprehensive verification system.

According to a recent National Police Agency report on the state of foreign English instructor crime, from 2007 to August 2009, 274 instructors were arrested for strong, crimes such as theft, drugs, assault, and sexual assault.

Currently, because native speaking instructor recruitment only fully works on paper, many point out that it is urgent that a methodical verification system be devised.

The problem teacher in question was also recruited from the U.S. but it is said that when the visa was issued, his qualifications were evaluated on the basis of such things as a university diploma, a health check, and a criminal record check. Also, following their own regulations, recruitment agencies conduct interviews in Korea and locally but have made the instructor’s academic ability the standard rather than the instructor’s sense of ethics.

Because of this, last year Representative Choi Young-hee (Democratic Party), proposed an amendment to strengthen the Early Childhood Education Act, the Elementary and Secondary Education Act, and the Hagwon Act by making Korean criminal record checks and drug tests mandatory when recruiting foreign teachers, however due to things such as human rights issues, it is drifting around the National Assembly.

Rep. Choi said, “Recently, demand for foreign teachers has been rapidly increasing due to things like English immersion policy, but verification and administrative measures to deal with them are non-existent,” and, “Amending these laws as soon as possible should provide a more secure learning environment for children and teens.”

The above article is quite similar to this one by the Asia Gyeongje published a few hours earlier, though that paper scores a few more nationalist points for referring to the girl(s) in the videos as "우리나라 여성," and to the students of the teacher as "우리나라 아이들." NoCut News' article ends on a note very similar to this one (as in, 'Ctrl C, Ctrl V'), calling for Choi Young-hee's bills to be passed, even though they differ very little from the new regulations immigration recently put into place.
Posted by matt at 12:11 PM

This hysterical rhetoric may shape shitty policy but does it actually shape the Korean culture? And if so, to what meaningful extent?

(I have to say that I've yet to see a standard for qualifying English teachers entering Korea that goes further than Americans would insist upon bringing foreigners into American public schools. Quite frankly, US citizens would require much more of the foreign teachers as far as experience and credentials are concerned.)

I think it's a worthwhile question.

As well, much of the nationalist sentiment in Korea, for example within the left wing, is not xenophobic.

I'd also point out that researching articles in hangukmal and english regarding teachers, it appears that the conservative Korean press considers ALL teachers potential perverts. I do believe you cited, or one of your readers did (I can't recall,) that one report warned that there are a potential 3.7 sexual predators in each classroom.

Considering the recent past and legitimate concerns about Korea's unstable future as an economic (and cultural) power in the first world, is it strange that this hysterical and paranoid, I'd say neurotic, crap ends up in the national press?

We know that journalism lacks objective credibility here. With what I'm writing about, lately, I wonder just what the popular media here has to say about the people and public discourse. I find that journalism tends to be an attention-seeking medium anymore--print, especially, but television, too. In other words, it just might lack the ability to construct any material reality or, even, ideological representations of reality with any regularity.

To focus on the vocal minority of US xenophobic nationalists for a moment. Recent focus group reports show that Hannity, Beck, O'Reilly do shape folks' views about reality and ideas *in the minority, white right wing*--in other words, within the Tea Party. If I were to represent what those men say about liberals, democrats, Obama, et al., as what Americans think about immigration and foreign influence in the US, I'd be misrepresenting the reality of what even American conservatives believe about history and daily life.

The left is probably just as nationalist and xenophobic as the right. Regarding foreign teachers, the Kyunghyang Sinmun and Seoul Sinmun have both given space to AES, while Pressian penned a classic about foreign teacher 'vampires' of Hongdae. The Hankyoreh hasn't sunk to these depths in regards to teachers, but back when it was on the rampage after GI crime, a lot of ridiculous articles appeared there. The left has regularly depicted GIs as rapists, who gleefully run over schoolchildren and sexually harass Korean women and then attack Koreans who try to stop this (the opposite of what actually happened in 1995). The left has also spearheaded boycotts of American goods due to them being poisoned (mad cow protests) or because of unfair trade practices by rapacious Americans (in the comic mentioned here).

Korean teachers get a lot of flack (for the Korean Teachers and Educational Workers Union (which, by the way, declared that 2 cases of sexual assault/harassment by non native teachers at English Villages in 2006 were due to“structural problem brought on by unchecked native speakers), for being poor teachers, for brutal discipline), but, even though it was announced 124 teachers had been arrested but barely punished for various sex crimes (from 2006-2009), sex crimes by Korean teachers haven't - I believe - been portrayed as a growing social problem endemic to public school teachers in general.

(That "potential 3.7 sexual predators in each classroom" bit was from a satirical piss-take on a certain reporter's articles, by the way.

You make a good point about how these opinions about / constructions of foreigners are received. As I wrote in a comment recently, I think the way foreign teachers and foreigner workers are portrayed is often at odds to how the population feels (the press generally treats foreign workers well, unlike how they are often actually treated, while the press portrays foreign teachers negatively, but they are usually well treated in Korean society). With both the left and the right joining in on such negative portrayals, it's hard to know how people actually feel about different groups of foreigners. Perhaps surveys would be a good way to judge (the one about whether foreign teachers should continue to get HIV tests - with 80% stating they should - may tell us something, but without knowing how it was conducted, the questions asked, etc, it's pretty hard to know for sure.

"I do believe you cited, or one of your readers did (I can't recall,) that one report warned that there are a potential 3.7 sexual predators in each classroom."

Gary, it was me who said that here, and as matt said, it was pure satire! You missed that??

"3.7 sexual predator Korean teachers in each classroom"! - good grief man, what student has that many good teachers in a classroom? Isn't it usually one teacher per class? And what's .7 of a teacher?

I'll second the request from Gary Norris - are people actually eating up this slop, or are they just picking this up because it's there for their subway ride home?

Either way, it's a troubling trend - one that I'd love to see a lawsuit or three from. The sort that gets decided by highest court and set a precedent (one possible question: can a journalist / publication be liable for libelous / slander based on one's race or occupation? You didn't libel / slander me PERSONALLY, but you threw my profession / livelihood into question.)

"I'll second the request from Gary Norris - are people actually eating up this slop...?"

Are you one of those foreign teachers who gets tested for the presence of AIDS and illegal drug use?

really i am sorry for my sloppy response. i wrote it in two minutes between students....