The 1988 Seoul Summer Olympics opened on this day 25 years ago, and the The Korea Sports Promotion Foundation celebrated the milestone today. 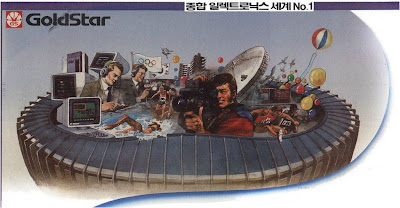 Those Olympics can be described in many ways: as the first (almost) boycott-free Olympics in over a decade, an Olympics which made money for the hosts (Montreal took ages to pay off the 1976 Olympics), the Olympics with climaxed with the showdown between Carl Lewis and Ben Johnson (and Canadians all remember the shameful result of that), a well-organized event which ran well despite the threat of North Korean terrorism, and especially as Korea's 'coming out party,' which saw everyone from Pico Iyer to Ian Buruma to Hustler Magazine discovering and writing about Korea for the first time. (And coming in fourth, it was also Korea's highest ranking in any Olympics.)

Koreans wanted everything to go perfectly, and were more than ready to showcase their country (and praise it to the heavens): 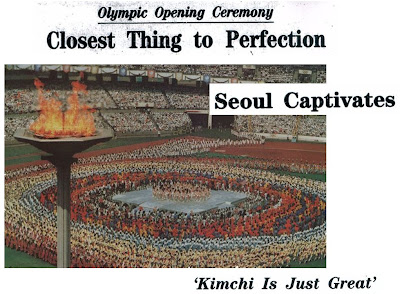 As Ian Buruma wrote in his article in The New York Review of Books titled 'Playing for Keeps,'


Power, miracle, power, power! One cannot escape it: these are the expressions of a country that is either superbly confident or racked by anxiety. Whenever one assumes it to be the former, evidence of the latter tends to break through.

Much was made of the tourists coming to visit, as photos below of the 'Olympic family' show, but Korea was also quite scared of the idea of such an invasion of foreigners, and feared they would bring AIDS with them. 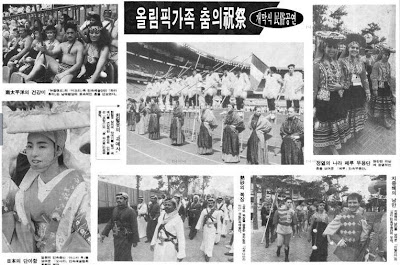 The confidence / anxiety dichotomy Buruma describes played out in several ways, but most notably - through anger at reporting by American network NBC - contributed to one of the most enduring legacies of the 1988 Olympics: Anti-Americanism. 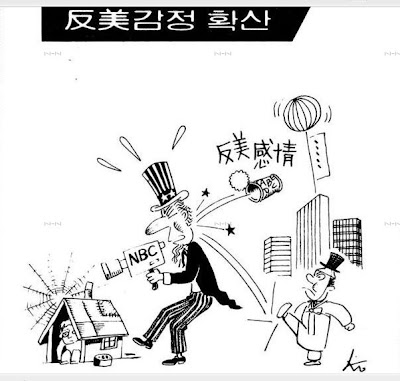 It was, in fact, during the 1988 Olympics that, due to the media inflating incidents involving thoughtless behavior by Americans, anti Americanism went mainstream, moving from universities and street demonstrations to the living rooms of the populace at large.

Over the next few days I'll try to post on some of these topics (I've probably done enough research to write a book, so it can be hard to whittle it down to blog post size). I'd imagine a fun place to start would either be the plans Korea tried to put in place to prevent the spread of HIV, or a Hankyoreh opinion piece on the haughty, decadent American, Carl Lewis.
Posted by matt at 8:47 PM