NBC uses the power of t-shirts to insult Korea... again

On September 28 the Donga Ilbo reported that shortly before Johnny Gray 'kicked' a taxi in one part of Itaewon, elsewhere in that unlucky neighbourhood another insult to Korea was occurring:

Some employees of the American broadcaster NBC, which came to Korea to cover the Olympics, are causing controversy due to a group t-shirt order they made which has writing in English denigrating Korea. At 8pm on September 27, Jack Sedrak and three other American employees of NBC came to the Sunflower clothing store owned by Jeong In-cheol (28) in Seoul's Itaewon-dong and ordered 48 T-shirts to be made by October 1, but they asked to have a design and English lettering put on them which denigrated Korea.

The design of the shirt they ordered was titled 'Olympic venue cheap t-shirt' and they wanted written on the back the title 'chaotic 88 performance' above the Korean flag with a boxers having a match in the center, and on the front the NBC peacock pattern and 'we are boxing,' 'we are bad' written in English.

Mr. Jeong said, "The design they ordered gives the impression that all Koreans had acknowledged the ruckus in the boxing arena during the Olympics to be a mistake, so I refused to make them."

The list of 48 people ordering the t-shirt that Mr. Jeong had was confirmed to include NBC reporters, PDs, and engineers.

As can be seen in the examples below, the 'sweatshirt' in 'venue sweatshirt' was not meant to mean 'cheap': 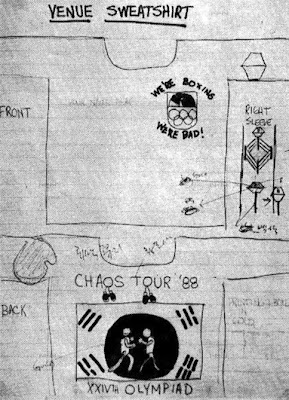 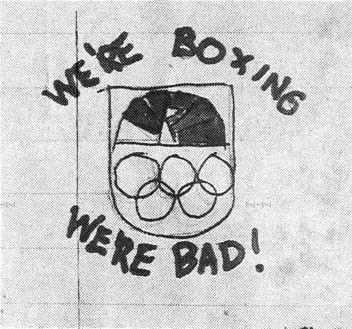 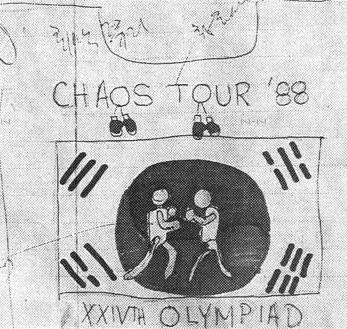 Yeah, like using the Korean flag that way, while making reference to boxing, was ever going to go over well. The Kyunghyang Sinmun also had a great title:

"NBC employees insult the Korean flag
T-shirt group order causes trouble with design of boxing on a taeguk pattern
Even derogatory phrases in English... The order was rejected at 6 places"


I have no idea if that last part is true. If it is, those staffers were pretty clueless. Here's the Korea Herald's article: 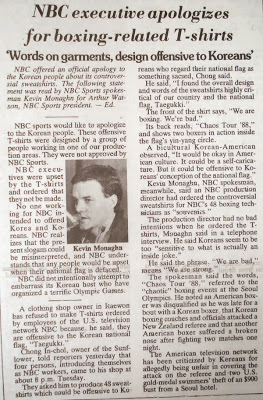 The Korea Times went for a more strident headline: 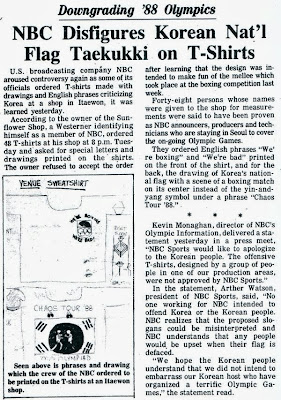 It wasn't the only flag problem to come light, as this AP article from the 27th revealed:


In another development today, city officials said some 500 Olympic flags have been stolen or damaged near U.S. Army headquarters in Seoul.

Local authorities, who declined to be named, said the flags had disappeared or been damaged since late July in the area around the headquarters of the U.S. 8th Army in the Yongsang district.

The next day would see more NBC controversy, as the Miami Herald reported:


In another wrinkle to the boxing incident, the English- language Korea Times obtained and published two cartoons Thursday by Miami physician Ferdie Pacheco, who works as a boxing commentator for NBC. One of Pacheco's cartoons showed NBC boxing commentators in a bunker, surrounded by barbed wire at ringside. Another showed referees dressed in helmets and body armor. The cartoons were displayed at the Main Press Center where thousands of journalists could see them. 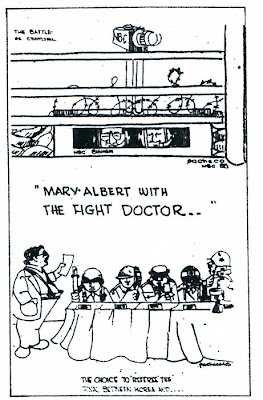 'The choice to referee the final between Korea and...'

Have you no respect, NBC? As Ian Baruma put it, "NBC was accused [...] even of insulting the "Korean identity." One wonders whether Bryant Gumbel even knows what the Korean identity is, let alone desires to insult it. But perhaps that was the problem: he should have been more informed about Koreans."

T-shirts would come up again in the same breath as NBC in an October 1 Donga Ilbo article with the following titles:

T-shirt with phrase denigrating Korea
American NBC employees produced them
Read: ‘After the Olympics go to hell’ and ‘ 오 제기랄’

American employees of the broadcaster NBC have once again caused controversy after some shirts they ordered and had made which have designs denigrating Korea and crude phrases were confirmed.

It goes on to  say that at 8pm on September 30 in  - where else – Itaewon, three NBC staffers visited a t-shirt place placing orders for 500 shirts of 3 different types. Only one shirt is shown to exist, as seen below, which reads ‘NBC 1988 Olympic Videotape Team’ on the front and  ‘오 제기랄’  [Damn it!] on the back. Another is said to have the outline of Namdaemun and  ‘AFTER THE OLYMPICS GO TO THEHELL’ written on it , while another has a map of Korea with the 38th parallel on it and the caption ‘THE LOSTVENUE CREW.’ Interesting that there's no photos of anything offensive: 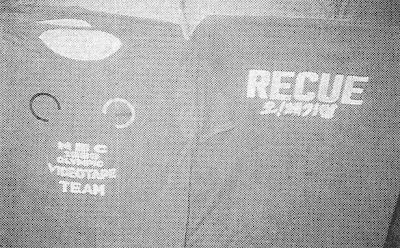 Are we really going to pretend this is anything other than the Donga Ilbo trying to stoke the embers of outrage? And all over something not only as innocuous as ‘오 제기랄,’ but also over something that shows that foreigners were in fact learning something about Korea? The article describes the t-shirts as insulting to Korea, but this story didn’t really lead to much, and NBC disavowed them and explained them differently, as this October 3 Korea Herald report reveals: 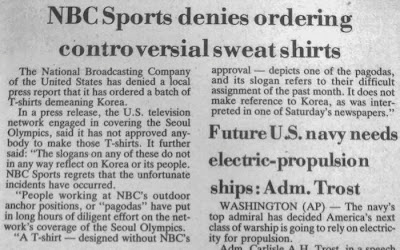 Going back to the Donga Ilbo at the top of this post, it appeared on page 15 of the September 28 edition, and was surrounded by three other negative stories about Americans: One was about Johnny Gray's taxi run-in, another was an update on the swimmers, and the other was this cartoon, which shows what happens when an NBC reporter, who says "Let's report only about Seoul's back alleys," runs into a roasted chestnut vendor. 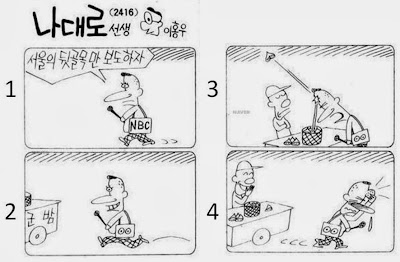 Even before the T-shirt incident NBC was "warn[ing] its staff not to display their peacock logos in public," as the New York Times reported. And as if making cartoons about NBC and chasing Americans through the streets of Itaewon wasn't enough payback, on the the day that cartoon was published, something else happened. As the Miami Herald put it:


"We Hate NBC" placards have been flashed at sporting events by Korean spectators. U.S. boxers are booed, and when the U.S. basketball team lost to the Soviet Union on Wednesday, the Korean audience broke into wild cheers.

That would be the same USSR that blew Korean Air flight 007 out of the sky five years earlier, killing 269 people, just to keep track. 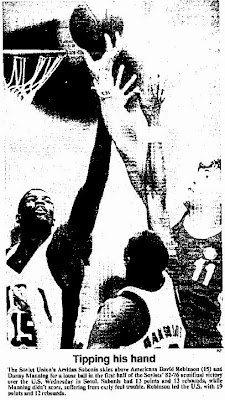 I mentioned some time ago I was doing research about the Olympics to an expat who was here at the time and he just shook his head and said, "The Olympics were horrible. They cheered for the Soviets, so I cheered for Japan." And indeed, there were lots of angry letters in the Korea Times, and one AP article opened with "From the newspaper headlines and the high-decibel booing of the crowds, you would think Yankee-bashing had become an Olympic sport."

Those are for another day, however.
Posted by matt at 11:54 PM

"Some employees of the American broadcaster NBC, which came to Korea to cover the Olympics, are causing controversy due to a group t-shirt order they made which has writing in English denigrating Korea."

I love it when newspapers claim innocently that some third party is "causing controversy," when it is often more accurate to say that it is the newspapers themselves that are stirring up shit as is the case here. This was a private, small-scale business deal that evidently didn't even come to fruition. The only reason it became "controversial" was because newspapers like the Donga Ilbo decided to make it so.

Anyway, lighten up, Korean people, seriously. Any grade-school American kid at the time would have known that "We're bad!" was actually a machismo boast in Ebonics. Only pussies can't take a little trash talk, which is to say, the Koreans weren't very "bad" at all!

"That would be the same USSR that blew Korean Air flight 007 out of the sky five years earlier, killing 269 people, just to keep track."

This kind of disconnect is just mind boggling; all the more reason to kill nationalism.

Speaking to Koreans in 1989 I was told they understood NBC's "We're Bad" to be "Korea is bad".

I don't know whether you've concluded your '88 Seoul Olympic coverage; if not you may want to see if you can dig up any of NBC's country profile pieces. I recall Koreans were outraged over stories about mixed-race children, prostitution, and anti-American fire-bomb attacks. The post-Olympic mixed-race baby boom is another issue that "shames" Koreans.

Seouldout,
Thanks for the comment. I still have a concluding post(or two?) to write. The NBC reports would be great to get ahold of, but I imagine that wouldn't be so easy in Korea. But a "post-Olympic mixed-race baby boom"? I know nothing about that. Feel free to say more about that!

I didn't mention the meaning of bad, since I remember it, but I suppose younger generations might not have any idea of 'bad's former meaning (it doesn't seem to be used anymore, except perhaps in 'bad-ass').

I learned about it from Koreans, who called them "Olympic babies" - I reckon those now in their mid 40s and older would know about it. You may want to check Korean news reports 6-9 months after the Olympics concluded. I have several friends who were English teachers, businessmen, and smugglers living in Seoul at the time and all stated it was a full-on f*ckfest during the Olympics; the local girls were on the hunt for foreign fellas. Prior to the games most Koreans considered all foreigners there to be US military, and only the lowest of the low associated with them. But with the world's spotlight on a preening Seoul the normal wariness waned and all Seoulites were encouraged to be kind and hospitable to the foreign guests. This significantly reduced the normal harsh glares and worse women received from her fellow Koreans when accompanying foreigners. This relaxed environment allowed many to try what they had thought about.