It took me awhile to get around to this. On September 5, Yonhap broke the following story about busts in Busan:

It's been revealed that a job broker indiscriminately hired foreign students not from English-speaking countries after 'street interviews,' took in fees and introduced them to schools and hagwons.

Anyone wanting to work in Korea as native speaking English instructors must be from countries where English is the mother tongue and have a bachelor's degree. These seven countries are the US, UK, Canada, Ireland, Australia, New Zealand, and South Africa, but the unqualified instructors who were caught were students from places like Russia, Iran, Kenya, Cameroon and Algeria.

The unqualified instructor from Cameroon had, in 2011, sexually assaulted a woman in a bar in Busan, but worked openly in a hagwon as a native speaking instructor.

The foreign students were recruited by approaching them in places like coffee shops around universities or via the internet, and he did not quibble over whether or not they were qualified.

By introducing fraudulent, unqualified instructors who didn't even have English skills or, of course, correct pronunciation, and receiving 30% of the tuition fees, police found that Mr. Son made 10 million won in undeserved profit.

International crime division head Jo Jung-hyeok said, "The unqualified English instructors who were caught taught elementary school students with the English they had learned before coming to Korea to study, but their ability wasn't even at the level of everyday practical English."

The police together with the Busan Office of Education will begin an investigation into the operators of after school programs.

Other media outlets joined in on the fun, especially YTN, which published three different articles. Some of the titles:

Only the Busan Ilbo and NoCut News had titles which made clear brokers or hagwon bosses had been arrested.

Here's a graphic from Asia News explaining how the money flowed (another less colourful one is here): 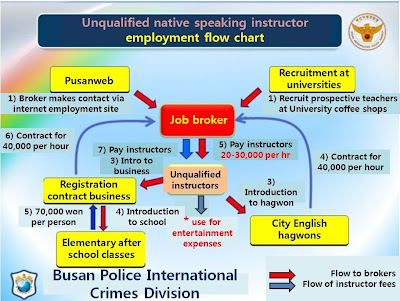 One wonders how the scam was discovered. Did one of the teachers' Korean coworkers finally realize that their native speaker wasn't quite up to snuff? Or was it something else?
Posted by matt at 7:05 PM

The war on "illegal" and "low-quality" foreign ESL teachers in South Korea is sort of like the war on drugs. The question is, who really benefits from such never-ending, low-intensity conflict? In the case of the war on drugs, it's the well-funded state security apparatus. As for the war against native English teachers in South Korea, the Korean media appear to be the primary beneficiaries, given how relentlessly they cover the issue, although the security apparatus in South Korea also have much to gain from endless crackdowns.

The question is, just as some say that legalizing drugs would be a more efficient use of social resources, what if the war on foreign English teachers in South Korea was suddenly stopped, which is to say, radically liberalizing visa restrictions and allowing the market to decide who is or isn't a "low-quality" English teacher?

I dare say it might very well benefit the average Korean consumer, while job recruiters, dodgy hagwon owners and many opportunistic politicians would certainly lose out. At the same time, the Korean media would no longer be spoon-fed so many stories that only serve to feed local xenophobia, and might actually have to go out and do some actual work and reporting.

Obviously, tis but a pipe dream of fools and madmen!