Well, I wish I had discovered this piece a few days ago - now we can see the story of the swimmers from a Korean witness's point of view.

On September 27, 1988, the Hankyoreh published an interview with an assistant manager at J J Mahoney's


"Taking a 30kg statue was a prank?"
Rather than an apology, a hail of abuse and excuses
Threats and contemptuous treatment by dispatched US military police as well
Interview with assistant manager where the theft took place

Gu Yu-hoi, the assistant manager of JJ Mahoney's, a leisure club in the basement of the Hyatt hotel, caught the American swimmers who made off with a 630,000 won lion-shaped statue, and is surprised at how the incident has led to a larger problem between the US and Korea than he would have imagined.

Mr Gu said that when he was chasing those who made off with the lion statue, more than punishment he was only thinking that he had to get the stolen article back. When they were confronted with the evidence they denied the crime and even at the police box, rather than apologizing they acted brazenly, and the American military police who were dispatched also strode in arrogantly, which made him furious.

Q: How were they when they arrived at the club?

A: They came in at 1:00am on the 24th with a Korean woman in her early twenties, but didn't seem drunk.

Q: What did they do as they drank?
A: They shared a bottle of Majuang Wine between the four of them, laid back in their chairs and stretched out their legs, and acted as they pleased, hitting two glasses together and breaking them, and they received a warning.
Q: And at the bar in Itaewon where they were caught, they denied that they had stolen it?

A: Though she insisted they hadn't come to our club we persuaded the Korean girl and she just barely admitted it. I found the statue which they had hidden in a music room and produced a photo of the statue previously taken in preparation for a situation like this. Then they started hurling all kinds of obscenities at me and ran off, and we dragged them down as they were getting into a taxi.

Q: What kind of action did you take after that?

A: We immediately reported them to the nearby Itaewon police box and then two American military police and one Katusa arrived and as they tried to take [the swimmers] away a scuffle started for a moment and they were dragged off to the police box.

Q: How did they act at the police box?

A: Up to that point if they had just showed regret and apologized we wouldn't have wanted to take the issue further, but the American military police were threatening and contemptuous towards us, saying "We'll accuse you of unlawful interference." They spit and slept on the police box floor and made me feel humiliated as a Korean.** The Korean police stood in front of the Americans and covered them, and frustrated [attempts] by reporters to take photographs.

Q: What is your reaction to the mass media reports on this?

A: Foreign media such as Worldwide News (WWN), Brazil Television, and NHK flocked to our club to do interviews and take photos. Today as well there are plans for West German television to do a report. The day after the incident six American swimmers including Biondi came to see the statue and laughed and said it was "heavy."*

Mr. Gu added, "The Americans said it was a prank but taking a 30kg statue is never a laughing matter."

"Arrested for moving a concrete block"

Meanwhile, American media such as AP and ABC News reported the facts of theft by some American athletes completely differently.

The article concludes by translating an AP article I can't find in its entirety (only its piecemeal incorporation into different American newspapers). Here are a few versions: 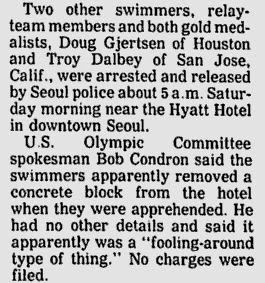 Here's one more that mentions it:


Early today, it was announced that Dalbey and Doug Gjertsen of Atlanta were taken into police custody for allegedly removing a concrete block from a downtown hotel.

No charges were filed and U.S. Olympic Committee attorney Ron Rowan said Gjertsen and Dalbey were released. USOC spokesman Bob Condron said he had few details of the incident, which he described as ''a fooling-around type of thing.''

Condron said the incident took place at the Hyatt Hotel, the USOC headquarters during the Games and just on the outskirts of Itaewon, the neon- lit strip of tourist shops and bars that has become a magnet for foreign visitors to Seoul.

They allegedly removed a concrete block from the hotel, and later returned to the village about 10 miles away, Condron said.

* The article above makes clear Biondi swam the relay race with Dalbey that day, so he likely came to see the mask to see what his teammate had been up to first hand.
** "민족적인 모멸감을 느끼게 했다." [I first wrote 'ethnically humiliated,' but 'humiliated as a Korean' I thought works better. Any other suggestions?]

A note on the testimony of Mr. Gu. He describes that swimmers as being unruly and swearing; while Gjertsen did not describe this, he only really described his own actions after they were caught; he didn't really discuss the others, and as this quote notes,


Gjertsen said a USOC lawyer asked him to apologize in public and he agreed because "Troy would have lost his temper."

As well, Mr. Gu also states that, "we dragged them down as they were getting into a taxi," and that "as [the MPs] tried to take [the swimmers] away a scuffle started for a moment." While how the scuffle played out is described rather differently by Gjertsen, the two accounts do agree on a scuffle happening involving the MPs and on the fact that the swimmers were dragged down by at least two Koreans.

As for the AP report mentioning the 'concrete block,' it's interesting that its not in their archives, since it was the focus (as we see above) of a great deal of criticism by the Korean media. Below is another AP article from September 24 with more information but still a lot of confusion as to what exactly had happened. I've  included links to all seven AP articles in their archives on the incident (and again, I wish I had found these a few days ago!).

Prosecutor Will Not File Charges Against U.S. Swimmers For Prank

U.S. Olympic Swimmers To Be Allowed To Go Home

The deluge of anti-American articles which followed this incident will be the topic of an upcoming post. Next however, will be the story of some other Americans caught by police in Itaewon just over 12 hours after the swimmers were caught. When it rained, it poured.
Posted by matt at 11:20 PM

Yeah, that's how I would celebrate a gold medal: Majuang wine. Yeesh.

The one thing you need to know about The Hankyoreh is that they make shit up, because they are an ideologically driven propaganda rag first and foremost, and yes I speak from personal experience.

In other words, this "interview" should by no means be taken at face value. Was the interview recorded? Highly doubt it. A few quotes that fit the reporter's preconceived agenda were no doubt quickly scrawled in the reporter's notebook, and then properly "tweaked" prior to publication.

Voila, suddenly the minjok are up in arms. See how that works?

They "laid back in their chairs and stretched out their legs, and acted as they pleased"! And in a bar no less -- the nerve of these yanks.

I also enjoy it when the articles contain some cultural specific fabrication, like the man saying the Americans were spitting to show their disrespect.