Stop me if you've heard this one: Four GIs head to Itaewon in a taxi...

Part 10: Stop me if you've heard this one: Four GIs head to Itaewon in a taxi...

On September 26, 1988, in an edition of the Donga Ilbo with no less than six articles reporting crimes by Americans or railing against American arrogance, the following article was published detailing an incident which took place in Itaewon on September 24, less than 20 hours after the swimmers had been caught by police after being attacked by a mob.

At 8:30 in the evening on the 24th, on the street in front of Madonna Disco Club at 131 Itaewon-dong, Yongsan-gu, four American soldiers, including 8th Army Corporal Anthony Spence (20), failed to pay the taxi fare after being driven from Dongducheon Township in Gyeonggi-do by driver Oh Hui-sik in Seoul taxi number 8751, and fled, and when chased by Oh and other citizens they brandished a knife and used violence against them. Three of the four were caught by police.

According to driver Oh, at 7:20 pm that night they promised to pay him 15,000 won to drive them from the Yurim Hotel in Dongducheon Township to Itaewon, and in the car they drank two bottles of whiskey snorted a hallucigenic-looking powder up their noses and kept making a lot of noise.

After arriving in Itaewon at 8:20 and not paying the fare and getting out of the taxi, driver Oh protested and they swung a bag containing two whiskey bottles at him and hit him in the head and fled in the direction of Itaewon market.

Mr. Oh and citizens who saw the spectacle chased after them together, following about 30 meters behind, and in the market they kicked over and sent flying articles for sale in the street stalls, and one pulled out a 15cm jackknife he was carrying and threatened them, saying "If you come near me I'll kill you."

Because of this Mr. Oh and another citizen had their hand injured.

After inflicting violence upon Mr. Oh and citizens the American soldiers fled in the direction of the nearby US military base, and three of them of them were caught by three conscripted policement from Yongsan police station and around 20 citizens, and then were turned over to authorities from the US 8th Army.

Meanwhile, the three US soldiers arrested by police have been summoned to come in on the morning of the 26th to investigate the precise details of the case.

Here's how the Korea Herald reported it on September 27: 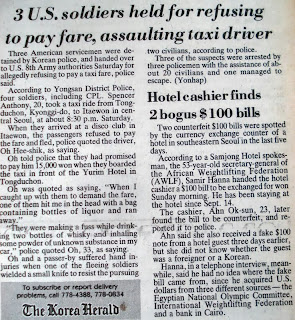 An AP article on the 26th describing the media fallout of the swimmer's theft incident mentioned that "Papers carried articles Monday playing up recent minor incidents, including some American soldiers refusing to pay a taxi driver."

It's interesting what's getting omitted in the different articles. Considering the aroused anti-US passions at the time and the fact that it's the Korean media on a "the nation has been insulted" and xenophobic high,  I expect that there's some exaggeration (or even fabrication) regarding the story. But the AP article makes no mention of a knife or the drug allegations, while the Herald leaves out the pursuit of justice by a mob concerned citizens, something that happened just hours earlier in Itaewon (and could be argued to have happened in the boxing ring days earlier to referee Keith Walker), and which would happen more than once in the next few weeks. Both English language outlets are leaving out purported unsavoury aspects of the incident regarding their own nationals as reported in the Donga Ilbo report.

It's mentioned, of course, that the soldiers were turned over to USFK authorities after their arrests. Within weeks the prosecution would begin to deal with such crimes in a different manner, and calls for changes to SOFA - the first since the agreement was signed in 1966, I believe - would begin to be made in the media and by politicians.
Posted by matt at 10:47 PM

Am I being naive here in thinking that it would be ethical reporting to get both sides of the story?

There may very well be more to this story, but we'll never know, since the alleged "assailants" have been rendered voiceless here.

I mean, how could a mob of "concerned citizens" have formed so quickly? If someone wants to dodge a taxi fare and simply flees, it takes seconds to do so. Remember that we are talking about trained soldiers in their physical prime.

Something else obviously happened here, since the GIs lingered at the taxi long enough for a crowd to form. Was there a dispute over the fare? Did the GIs feel that they were being ripped off, with the situation quickly escalating from there?

We'll never know, will we?

Anyway, it seems that the vigilance of the Korean media in covering such cross-cultural altercations has diminished considerably since then, as I was personally attacked for no reason by a mob of protesters during the allegedly peaceful candlelight vigils of 2008 -- and even have physical evidence to prove it -- yet not one Korean media outlet bothered to report on it.

Oh, wait, it was an American male who was attacked by Koreans, so that's not "newsworthy," is it? My mistake, carry on!

I was stationed there at the time with the 2nd Inf Div. in 1988. Two of the guys were from my unit (1/15th FA) they said it was over the fare. The driver wanted more than what they had usually paid once they got to Itewan because he allowed them to party in the cab. Due to that incident we got the pre-weekend speech at the Friday formation to make sure you agree on the price before getting into the cab. I never heard the knife part until I read this story. They never mentioned the knife in the Stars & stripe paper either.. Interesting.