On November 21 a citizen reporter at Ohmynews wrote about the history of English immersion education in Korea; I think you might be able to tell how she feels about it from the title. The final section of the lengthy article is about one problematic aspect of the system. Need I mention who it targets?

The intent of the native speaking assistant teacher system was to directly interact with native speakers to eliminate the sense of their foreignness and hear good pronunciation. It began in Seoul and spread throughout the country. Bringing foreigners into places of education for the purpose of only teaching English without a sense of education they end up as an assistant to [Korean] English teachers who have an interest in English education and a sense of youthful challenge. They have to teach the basics of handling classes to native speaking assistant teachers who are completely ignorant of the situation in Korea, and handle all kinds of problems like finding housing, immigration and going to the hospital.

Among native speaking assistant teachers there are also those who were teachers in foreign countries, but for a great many, far from knowing how to teach, they don't even have basic ability in social life and cause headaches for the English teachers who take care of them. In schools there are many who scorn the '30 million won stereos.' At Korean schools where they are given jobs just because they speak English, native speakers learn teaching methods from teachers and there are many cases of them changing their jobs to work in Japan or as an instructor in a hagwon. Some are involved in international crime or drugs or sexual assault and have received social criticism. For this reason, as criticism of native speaking assistant teachers rose, it eventually became a chance to change policy to raise the qualifications for teachers who teach English.

This reporter over 5 years met 6 native speaking assistant teachers at a school. Because of native speakers who couldn't control their own feelings there were times when you had to be more sensitive to the feelings of the native speaker than the principal, and there were also native speakers who ignored teachers who couldn't speak English well. In elementary school I am professional and teach children but when native speakers in their mid 20s act in what seems like a disdainful manner, I get the feeling we are putting the cart before the horse. Even teachers receive this treatment, and there I also worry about how students will look at me. Through the government's wrong education policy, teachers and students have been wrongly harmed.

Native speaking assistant teachers have shown how poor the philosophy of Korean English education is, and how weak its educational foundation is. What country has its schools open, regardless of the teacher's knowledge or qualifications? Students who do not get private education encounter native speakers during class time and get frustrated, and increasingly keep their mouths closed. If students meet tasks they cannot solve themselves they will try to avoid situations and accept their lack of ability to deal with all problems. Poor national policy in fact eats at the confidence of students who are in the process of growing up.

From its introduction 15 years ago until now, only the necessity of elementary school English education has been brought up, and it goes on without proper research. As well, as it emphasizes the teaching method of countries which use English as a mother tongue rather than teaching methods appropriate to our country's language situation or teacher training system, it only alienates all teachers and students and increases social costs.

I imagine all that 'international crime' and 'sexual assault' by the dreaded native speakers is also alienating. As to where all this is coming from, the photo included in the article might give a clue: 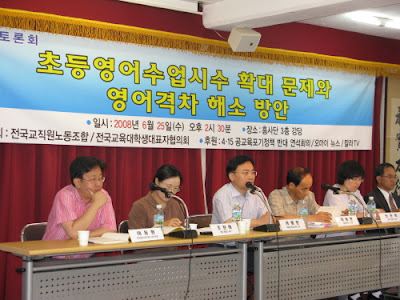 The banner reads: "Forum: Problems with the expansion of elementary school English class hours and measures to solve the English gap." Note that it took place on the anniversary of the start of the Korean War and involved the Korea Teachers' Union.

And indeed, according to this bio, the citizen reporter, Shin Eun-hui, is a former member of the Ministry of Education's elementary curriculum deliberation committee and a current member of the KTU's elementary curriculum research group (where she has co-written fun sounding books such as 'Don't believe your textbook! : Secrets of elementary textbooks which make fools of children and teachers') as well as an elementary school teacher. I don't think anyone will be too shocked by her KTU affiliation.

Still, I find it laughable that she has met 6 native speaking teachers and yet is only able to speak of them in very general terms: "Because of native speakers who couldn't control their own feelings there were times when you had to be more sensitive to the feelings of the native speaker than the principal, and there were also native speakers who ignored teachers who couldn't speak English well." Laughable, but not surprising, since this is a propaganda piece she's writing (the 'cruel history' of English education?). Mind you, she does teach in Chungcheongbuk-do, which is probably not one of those places that attracts people who actually know anything about Korea (though Chungju Lake does have its charms). Still, even the 'related article' by a different reporter linked to at the end of the article about how it's easy to become a native speaking teacher takes the time to actually do case studies of the foreign teachers the reporter had met, noting the positives (likes Korean food) and negatives (only stayed a year) about them.

As for the part of the title which mentions students who 'stick out their tongues on the operating table,' it refers to children undergoing a frenectomy, something I discussed in detail (regarding one of my students) here.
Posted by matt at 4:49 PM

A 30 million won stereo still means only about USD$27,500 in annual salary. I thought the NETs slept on beds of money?

I get the feeling that the writer thinks that only Japan and Korea employ native speakers to teach English at schools. The writer also seems not to realise that people from Western countries are much more aware of Japan and Japanese culture than they are Korea and as such Korean schools have to up the salary in order to attract teachers in the first place. If they cut NET's salary to 1.5 million per month and didn't include housing then the number of people willing to come to Korea to teach English would dry up very quickly.

I'm also perplexed at the writer's assumption that traditional Korean style education is the only thing that Korea needs. Sure it is, if you want to go back to the good old Joseon Dynasty mindset of cultural isolation. However, it is completely inadequate if Koreans want to be competitive in an international market.

Schools in the UK have native speaking assistants for foreign languages too. Their role is to give students the chance to have live conversations with a native speaker and thereby improve their speaking and listening skills.

From what I've read here at Gusts of Popular Feeling, though, it seems that Korean schools recruit native speakers without teaching qualifications and expect them to take the place of local professional teachers, and then are shocked and outraged that the native speakers don't have teaching qualifications, don't speak Korean, don't know Korean etiquette, can't keep order in class, etc. If that's true, Korean teachers are bound to be disappointed and frustrated by native speakers, because they expect too much from them.

Weirdly, although she's misinformed and jingoistic, I think she is right on a bunch of points.

Mass flying in of native speakers without teaching experience or training was a dumb, stupidly expensive policy, particularly since there was no clear plan of how to use them and no systemic evaluation of what aspects work or don't work. This does show up weaknesses in the philosophy of English Education in Korea. Many NESTs are disdainful of Korea and their workplaces, often with a weak understanding of the issues involved.