Via ROK Drop comes this Yonhap report about a visit to Korea by students and representatives of a school in the U.S. which uses the 'Korea Style' of education: 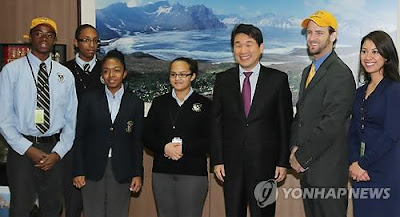 A group of teachers and students from U.S. charter schools that successfully adopted the Korean education met with the education minister here on Tuesday and shared their experiences.


Some 40 faculty members and students from Democracy Prep Public Charter Schools (DPPS) are in Seoul for a two-week trip through Wednesday to have chances to learn the Korean language and culture, just as they did at their schools.

Inspired by the Korean education system after having taught English in the Asian country for one year, Seth Andrew established the DPPS network in Harlem in 2006 and currently operates seven schools in New York.

The schools have been in the spotlight for their outstanding academic performance, with parents having enthusiastically enrolled their children in the charter schools, and Mayor Michael Bloomberg hailing their success, according to local media.

All students, mostly Latinos and African-Americans, are required to learn Korean language as a mandatory class, and they also do club activities related in Korean culture, such as Korean traditional dance and folk songs, or Taekwondo, through which they can learn "the core values of discipline, respect and enthusiasm," according to a school official.

During a meeting on Tuesday, South Korea's education minister Lee Ju-ho and the DPPS members exchanged views on "the secrets behind the successful Korean system and the personality education which Seoul has put an emphasis on in recent days," the education ministry official said.

I wonder if they all had to dance to Gangnam Style while singing 'Korean Style.'

It was back in June that the Korean media discovered this school. From a Korea Herald report at that time:


The Korean way of learning is making for a success story in New York City’s Harlem, thanks to a devoted educator who prioritizes discipline, enthusiasm and accountability.[...]

[Speaking of  Seth Andrew:] The 34-year-old, who used to teach English at a public school in Cheonan, said he had a “tremendous impression” from his teaching experience in Korea.

“I was in Korea for one year but the impact that had on me was profound, because I saw my students love learning and also love and respect teachers,” he said.

There is also something special about his school. Unlike other American schools, Democracy Prep High School is known for its strict discipline, and students study longer hours than their neighborhood peers.

He said the five core values of his school are discipline, respect, enthusiasm, accountability and maturity.

“I call it DREAM value,” he said, adding that he, especially, copied the benchmark for the level of discipline and respect for teachers in the Korean education system.

The American media had reported on this school much earlier, for example in the New York Times or here:


Black visits a Korean language class, which all Democracy Prep students take. Andrew says that the school chose Korean because it’s phonetic and has an alphabet (unlike Chinese and Japanese where there are thousands and thousands of characters) so it is actually possible to learn to read and write anything in Korean pretty quickly. Also, he figures it will give his students an advantage when they apply to college, as very few black and Latino students have studied Korean.

As noted at ROK Drop, however, the reason the students at the school get such high marks is that they only invite students who already have high marks.

Korean media reports aren't very interested in this, however, and for obvious reasons. The most important aspect of the school is that it disseminates Korean culture (a video of the students doing Korean-style drumming is here; another photo of students learning Korean culture is here):


Harlem, long one of New York City's more infamous neighborhoods, is home to a highly successful public charter school where Korean language and culture have become core pillars of their curriculum.

The event showcased an array of performances,.. from a fusion of traditional Korean folk dance and pop music, to a demonstration of Taekwondo martial arts.

The stunning display of multiculturalism is even more impressive because the school doesn't have a single Korean student.

No doubt this is impressive for people who equate culture with 'blood.'

Speaking of blood, Mr. Andrew, if you ever feel like seeing the Korean education system at first hand again, and enjoying the wonders of 'discipline' like this, positions are open - as long as you turn in your drug and HIV test.
Posted by matt at 8:57 AM

Hi, I'm passing along this site to anyone who lives / works / is apart of the Korean expat community. A fellow English teacher was severely injured while volunteering at an orphanage in India on holiday. She was hit my a motorcycle and complications have led to brain surgery (2 nights ago). I don't know her personally but I am asking that people help by reposting her fundraiser on their blogs. Please pass this along as I know if it was us in her shoes we would hope for the same. Thank you so much!! http://www.giveforward.com/thekarabethburtonfund