NoCut News: There is 90% satisfaction with foreign English teachers. However... 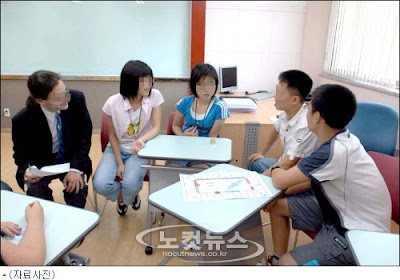 At each school there are as many as two people placed there to teach English speaking. There are many advantages such as giving students who cannot afford private education a chance to get rid of their fear and speak with foreigners.

For this reason, a survey conducted by the Ministry of Education, Science and Technology in large cities such as Seoul, Busan and Daegu found that there was a 90% satisfaction level [in regard to having foreign teachers].

However the assessment on the ground is different.

Due to the poor Korean ability of native speaking assistant teachers, Korean interpreter teachers have been put into class during lessons but, because of this, complaints by students about their difficulties in class have come to light.

Ms. Gwon, a first year student at a middle school in Yangcheon-gu, said, "The foreign teacher's pronunciation is really odd so I can't understand what he/she is saying." "The Korean teacher also doesn't understand and doesn't translate properly, and because he/she lists the words he/she hears, the class does not go properly

Because the students are confused by frequent changes in teachers, poor class preparation, and classes in which [the teacher] kills time, many students lose their desire [to learn].

Another middle school student, Ms. Lee (14), said, "The native speaking teacher jokes around and half-heartedly passes the time." "If you have class you should create a proper atmosphere, and when this doesn't happen we feel let down."

Mr. Ahn, an English conversation specialist instructor working at an elementary school in Uiwang, Gyeonggi-do, complained that, "My role extends to the native speaker appointment process, and so I have to contact the agency, recruit them, find them a house, and fill it with household items." "I feel like I'm a servant or a secretary."

Mr. Kim, an instructor working at a middle school in Chungcheongbuk-do, vented his frustration, saying, "Because they are poor at our language, they can't even deal with various documents and have problems with tests." "We are busy taking care of even the native speaking teacher's work, and when I actually see him/her playing games or chatting every day I burn with anger."

It seems NoCut News has another article to add to its large collection, of which these examples are a tiny fraction:

I couldn't see the phrase "explosion of complaints" regarding Korean conversation instructors in the subtitle without thinking of the New Daily article about GEPIK drinking parties published almost exactly a year ago. In fact, there is a pretty clear similarity between this line - "The dissatisfaction of some [Korean] English conversation specialist instructors who help native speaking assistant teachers is on the verge of exploding" - and this subtitle from the New Daily article: "the dissatisfaction of Korean instructors who kowtow to native speaking teachers in school is on the verge of exploding."

If I had to guess, I'd imagine NoCut News reporter Kim Yeon-ji cribbed from the New Daily article (which itself was inspired by Anti-English Spectrum). One wonders if she used the same or a similar forum for Korean instructors as the one mentioned in New Daily as a source.

As I started reading, I thought of this March 1 Korea Times article I discovered the other day:

In a 2009 survey conducted by the Seoul Metropolitan Government, more than 90 percent of 5,500 parents, students and teachers said that they thought the program was helpful, while 93 percent of Korean teachers were very satisfied with the foreign teachers’ qualifications and class performance.

I wouldn't mind finding the results of that survey (or the one mentioned in the above article). It's fascinating that there are so many negative articles about foreign public school teachers when there is apparently such a high level of satisfaction with them, something reiterated in the above article. That 90% figure came to mind as I started reading the above article, so I was surprised to see that this high level of 'satisfaction' was brought up, but then was not surprised to see it followed by "However...". It truly is impressive that the reporter was able to mention that there is "90% satisfaction" with native speaking teachers and then write an entirely negative article. As always, factual distractions from the 'truth' about foreign teachers must be discarded or ignored, in order to tell the age-old story: Koreans are victimized by foreigners.

I certainly enjoyed the part complaining about foreign teachers because they don't speak Korean, as well as the Korean instructors assigned to help recruit or translate for their foreign teachers blaming the teachers for existing instead of their superiors who gave the assignment (or themselves for taking the job in the first place).

As for the final sentence -

- the reporter makes it sound as if Gyeonggi-do represents a trend, when in fact it is the exception. As I pointed out here, most provinces continue to hire more native speaking teachers (though I imagine the saturation point will be reached before long, if it hasn't already).


In other news, at a news conference for High Kick 3 (will it also feature white guys who speak English being attacked and threatened with death for hitting on Korean women?), Yonhap and several other articles had titles such as "I am a native speaking teacher" in reference to actor Julien Kang. It's not uncommon to see a flurry of articles appear when an actor speaks English well, touting the person as speaking at a "native speaker level."
Posted by matt at 3:06 PM

I find it interesting that it is again the conversational instructors who are complaining. First of all, I have never heard of an instructor assisting with the hiring and placement of a foreign teacher. Our instructors come in five minutes before their first class and leave during their off periods, and for good after their last class of the day. They have no home room class and no extra responsibilities. Furthermore, our school has had about ten conversational instructors over the past two years. One had a chair thrown at her by a frustrated (otherwise very well behaved) student, and two more had the class turn on them and announce, quite frankly, that they were terrible teachers and that they didn't want to be taught by the anymore. A few have done alright, but the students routinely fail to bring pencils or books to their classes, and the rest just came and went after a single semester (high turn over rate was one of the issues mentioned, correct?).

In the meantime, my co-teachers who are permanent, certified teachers spend a lot of time complaining to me about all of the problems that these teachers make, expecting the other teachers to control their classroom management for them, fucking up the grading system, making serious mistakes with the exams (one time even leaking information that caused the English teachers to have to rewrite the entire thing the night before), and not knowing how to submit their grades properly.

"If Disco Had A Baby" is what I'd like to have your opinion about. Come on, I'm still waiting.

I'm wondering if the 90% was just about one question on a survey?

Otherwise, a great bit! I will likely show it to my upper level adult students.

You know, I never get these complaints.

(1) So the NEST is wasting time in class and not taking it seriously, blah blah blah... what do you expect when you hire KIDS straight out of college, with no teaching experience whatsoever, and no passion for the profession. They're here for the cash, that's all. Let them work in the hagwons babysitting the kiddies, and keep the dedicated teachers at the PS (yeah, sorry, that means biting the bullet and keep shelling out those Level 1+ salaries... that's what experience and knowledge costs)

(2) So the NEST wastes time in the office goofing off and playing computer games. And? The NEST is the assistant teacher, emphasis on ASSIST. The vast majority of them are not certified teachers nor have plans to go into teaching at all after leaving Korea, so why should they know how to develop lesson plans, curriculum, and whatnot. That's not their job because they are ASSISTANTS to the KETs. Another reason to keep the passionate and dedicated TEACHERS in PS and leave the cash cows to the hagwons.

"their duties have even come to include finding places to live for the native speaking assistant teachers."

Obviously, Korean public schools just need to pitch tents and set up port-a-potties in the middle of their soccer fields so that the precious free time of Korean teaching assistants isn't squandered over unnecessary things like places to sleep and poop and shower for dirty foreigner teachers.