I came across some statistics on my school's students today, and thought it was interesting to look at the demographics: 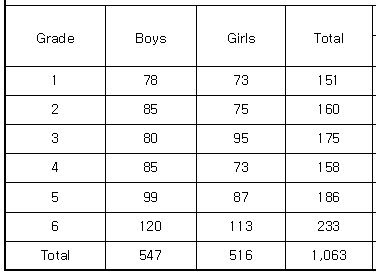 In the statistics above, you can see that for some reason there were about 15 more students in grade 3, and all of those 15 are girls. Seeing as they were born in 2003, perhaps some of them were conceived during the World Cup...

Of course, this is just one school. I went to a demonstration class in Mok-dong a few weeks ago and eventually realized that there were two boys for every girl in the grade 6 class that was being taught. I asked the teacher about this and she said that was the ratio for grade 6 students at that school (the other grades apparently weren't as bad). Needless to say, 2:1 is a rather skewed ratio, though it was confined to one area (and the school was fairly small).

I was wondering just how much of a change this was from the 1980s and 1990s, and according to this article, "South Korea’s sex ratio rose from just above normal to 117 in 1990—then the highest in the world—before falling back to more natural levels." The 'normal level' is considered 105 males for 100 females, and calculating it that way, the sex ratio at my school is 106 males to 100 females, making it only slightly above normal. Well then, looked at that way, the gender imbalance isn't as great as it might first seem.

It would be fascinating to see nationwide statistics over the last decade to see how the low birthrate has been developing. It doesn't seem like a trend that will change any time soon.
Posted by matt at 3:40 PM

If you haven't seen it already, here's a related brief article from The Chosun Ilbo: