As it was pointed out at ROK Drop, yesterday was the tenth anniversary of the vehicle accident which killed Shim Mi-seon and Shin Hyo-sun, two middle school girls from Yangju, and led to a very low point in Korea-U.S. relations. This ROK Drop post on the accident and its aftermath is well worth reading. The accident took place the same day Lee Myung-bak was elected Seoul Mayor, I just realized that it was the fact that it was an election day (a holiday) that allowed the girls to be walking on the side of the road to a friend's birthday party rather than be in school that morning. It's hard to believe ten years has passed since then, and I can't help but remember that the World Cup was taking place in Korea (and Japan) at the time, and as the Korean team won victory after victory, Korea became... a very different place, as if the country was taking a holiday from itself for awhile. Good times. I think one of my favourite memories was of watching the Korea-Italy game outside across from Bucheon city hall, when a bus driver driving an empty bus slowly drove by, craning his neck, trying to get a glimpse of the game on the big screen we were watching...

Unfortunately, the mood didn't last, and that 'let's gather in the streets and express our patriotism and uniformity' attitude contained within it the seeds of something darker which revealed itself later in the year after two U.S. soldiers, who were made to face a court-martial for political reasons, were found not guilty for involvement in the accident. (This was accompanied by the appearance of posters, some quite large, featuring the photo of the girls' crushed bodies, which appeared in many subway stations.) The month or more of candlelight protests which followed were conceived of by a netizen who used some sock puppetry to spread his idea of a candlelit non-protest protest near the U.S. embassy after watching a report on the case by (ahem) MBC's news program PD Notebook. So, in addition to what I mentioned previously, MBC has helped set off two sets of candlelit protests, what with the way they helped generate the hysteria surrounding mad cow disease which fueled months of anti-government protests in 2008 (which was built around several xenophobic/anti American tropes as well as the idea of Koreans being uniquely vulnerable).

As I wrote at that time,

I've seen posts in the English language Korean blogosphere pointing out that vigil organizers were going to commemorated the deaths of Shin Hyo-sun and Shim Mi-seon, the two middle school girls run over by a US military vehicle on June 13, 2002 (for more background on the incident [...] the Metropolitician offers his analysis of those that used their deaths to create a protest movement against the US military). [...] Candlelight vigils have been held in the same places as the current vigils are taking place every year since the girls died. The inclusion of a memorial for the girls should be of no surprise whatsoever to anyone who has been paying attention to how they've memorialized over the past few years. 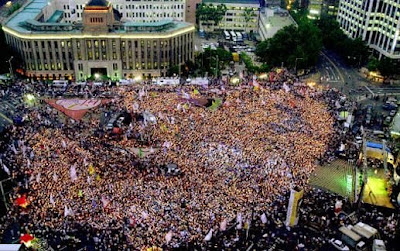 Above is a photo of the memorial vigil held in 2003 at City Hall (before Seoul Plaza was built), which is the same place the vigil was held this year. In 2004 and 2005, the girls' deaths were commemorated with vigils at Gwanghwamun. In 2006 there was a problem: June 13, the anniversary of their deaths, was the date of Korea's first World Cup game: 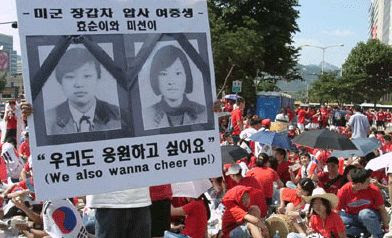 (The "up" isn't necessary... (from here))
The Hankyoreh criticized those celebrating in the streets for forgetting the anniversary of the girls' deaths, though a small memorial was held near Gwanghwamun. In 2007 a vigil was held at Cheonggye Plaza.

As well, the candle girl image which became a prominent symbol of the 2008 protests was based on the image of one of the girls: 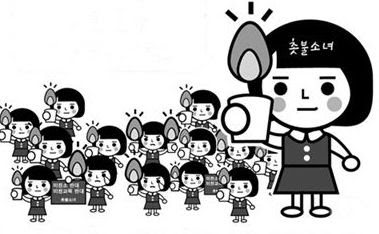 People gathered at the memorial built on the spot they died yesterday, and the night before protesters gathered in front of the gate of Deoksu Palace. 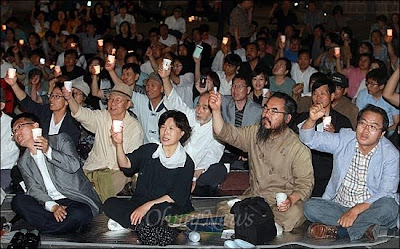 I wonder if it's even possible to conceive of them as anything other than symbols of a victimized nation.

Update:
The Hankyoreh has a very good article which does just that (via the Marmot's Hole).
Posted by matt at 9:41 AM

It's disgusting the way the leftist chinboistas have used the two girls' deaths for their pro-Pyongyang, anti-Seoul, and especially anti-USFK aims.

At the same time, though, the reaction on the other side is also unseemly. Watch how many people fall over themselves to blame the middle school girls for their own deaths.

The USFK convoy was not an accident but an accident waiting to happen. They were large vehicles on small roads (iirc, the girls would have had to jump into a ditch) operating with broken radio equipment that made it difficult to impossible to communicate from one vehicle to the other that there were pedestrians in the roadway. The military personnel were operating on so little sleep that they had made complaints to their commanders about it prior to the accident.

I agree with everything you said. But this is how the US military works (and most military forces I imagine) -- the little guys always take the fall for the screw-ups higher up.