Line 9 has more trains in service

I was surprised a week ago when the all-stop train I'd taken on line 9 stopped at Gayang Station and an express train came into the station ten minutes ahead (or behind) schedule. As it turns out, the planned expanded schedule I mentioned a few months ago has been put into place - at least at rush hour. I'm hoping we'll see more trains at other times as more of the new trains are put into service, but as it stands now the service has improved considerably, as this timetable at Gimpo Airport (headed east) shows: 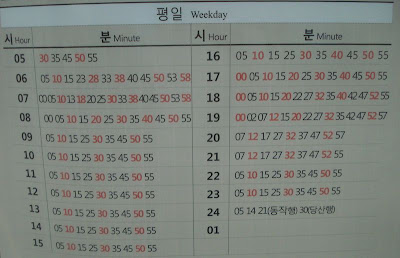 There are now twice as many express trains (and 1.5 times as many all stop trains) at rush hour, which makes a huge difference. There are more options, time-wise, and with this the crowding has been greatly reduced in the morning.

In other subway related news, fares are set to increase, but considering it's been 4 years since the last increase, it's not that surprising.