B.R. Myers on the Cheonan 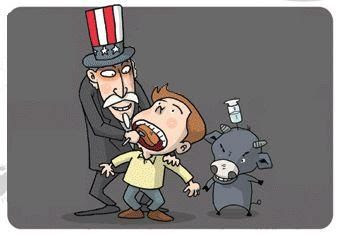 An op-ed article by B.R. Myers about the South Korean reaction to the sinking of the Cheonan appeared in the New York Times last week:

South Korean nationalism is something quite different from the patriotism toward the state that Americans feel. Identification with the Korean race is strong, while that with the Republic of Korea is weak. (Kim Jong-il has a distinct advantage here: his subjects are more likely to equate their state with the race itself.) Thus few South Koreans feel personally affected by the torpedo attack.[...]

[E]ven the conservative news media talk of the attack in terms of an “error” that the North should own up to, not a cold-blooded act. Students in my classes tend to refer to the sinking as an “accident.”

This urge to give the North Koreans the benefit of the doubt is in marked contrast to the public fury that erupted after the killings of two South Korean schoolgirls by an American military vehicle in 2002; it was widely claimed that the Yankees murdered them callously. During the street protests against American beef imports in the wake of a mad cow disease scare in 2008, posters of a child-poisoning Uncle Sam were all the rage. It is illuminating to compare those two anti-American frenzies with the small and geriatric protests against Pyongyang that have taken place in Seoul in recent weeks.

A number of my friends believe the government isn't revealing everything, and that North Korea may not be to blame. As for the "posters of a child-poisoning Uncle Sam," all I could think of was something like this (from here): 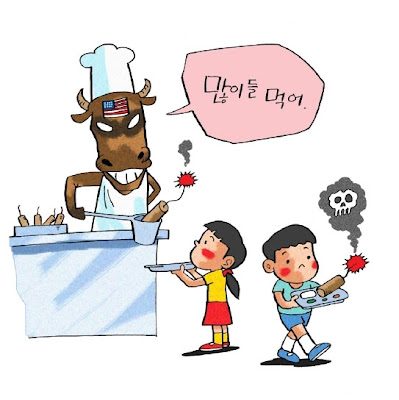 Does anyone know of any other posters that feature 'Uncle Sam,' or was Myers just using that term as a catchall metaphor for the U.S.?

[Update]
Here's one (edited and posted at the top of this post): 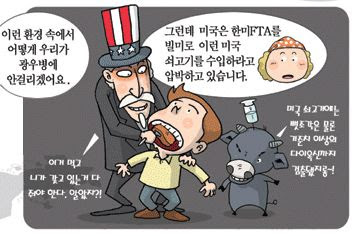 (What a great t-shirt... or album cover)
Here are some more. For an earlier post on such posters, see here, and see here for the background of the 2008 protests. Brian also suggested this picture). 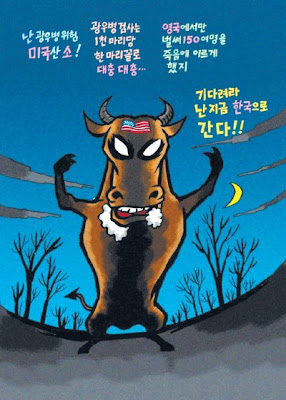 (Oddly enough, they don't mention how many Korean
cows are checked for Mad Cow Disease (from here)) 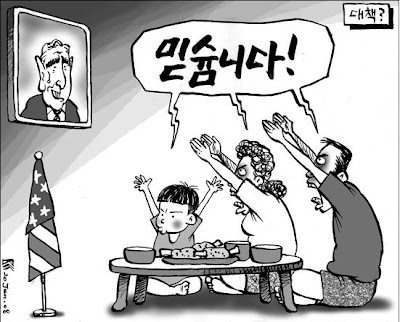 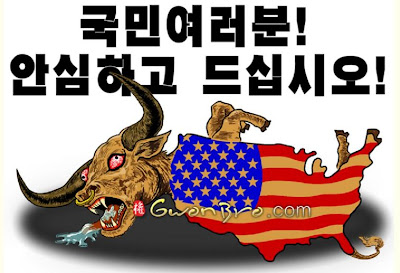 Relax and eat up, everyone! 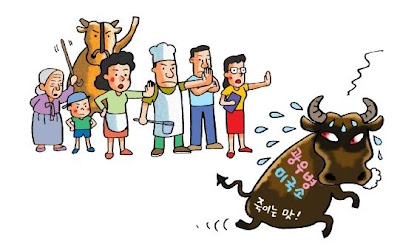 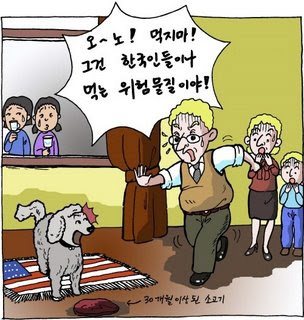 "Oh no! Don't eat that!
That's a dangerous substance for Koreans to eat!"
Posted by matt at 9:24 AM

It might be worth sending him an email and asking.

Regarding your tag: Isn't it a bit much to construct the binary, xenophobia or nationalism? I find it hard to believe you think it's one or the other.

You quote B.R. Myers:
"South Korean nationalism is something quite different from the patriotism toward the state that Americans feel. Identification with the Korean race is strong, while that with the Republic of Korea is weak."

This couplet is a meme that has been used for decades to describe and explain to westerners something that is supposedly unique about Koreans and Korean nationalism. Namely, that Koreans more strongly identify with race than country. Often it's used to excuse or explain a perceived racism here.

I don't know why scholars accept it without much criticism. (Bruce Cummings addresses it more than most, I think.) If anything, I have learned that Koreans have as much skepticism about their racial past--both biologically and socially constructed--as they have for their State and each other. I think it's a weak way to explain something away as unique to Koreans that is not as foreign to westerners as is often claimed and feeds into a mythology of Korean distinction and difference that quite frankly has never existed.

I wonder if the average American would stand for a similar means to explain Americans reaction to the destruction of the World Trade Center in 2001, or the bombing of the Oklahoma City IRS building earlier. I doubt it.

Why do we permit ourselves a sense of individuality that comes as a way of being, a primary characteristic, that we proscribe from others? The one thing I find more striking everyday I live in Korea is that Koreans are much less a monolithic people than some Koreans and most foreigners claim. (I do think we tend to confuse biology and sociology at times when it benefits a discussion.)

At any rate, I think it's a meme. And I think it's a weak effort to explain things to foreigners about Korean reactions to important events that flattens Korean experience into often thoughtless and always mass-mind responses to complex events.

In addition, most Koreans I know think the response to US beef was constructed by the media and spread by people who hate the US. Kind of exactly how the US media helps perpetuate racist and xenophobic images of Islam to Americans that, in the end, most Americans do not accept as true.

Gary Norris:
Your last paragraph applies to the situation in Korea. It's the media's and education system's articulation of and perpetuation of the concept of racial unity/ one-bloodedness that makes it relevant, even if many do not (entirely) subscribe to it.

I thought the more important point Myers made was about the very different responses to the attack on the Cheonan (and North Korean provocations generally) and the endless anti-US demonstrations and widespread anti-US feeling seen in 2002 and 2008.

As for feelings if ethnic unity, the unification paintings some of my grade 5 students did recently, with many using 'We are one,' and 'We are one race (minjok)' to describe their feelings about North Korea (along with 'We want reunification'), all post-Cheonan, may indicate that such racialized consciousness isn't going away any time soon.

In addition, in Han Kyung-Koo's essay "The Archaeology of the Ethnically Homogeneous Nation-State and Multiculturalism in Korea," he writes that "[T]those who identify ethnic homogeneity as the main cause for prejudice and discrimination against foreign workers and brides are actually engaging the wrong enemy, since the real cause of prejudice is this very sense of cultural distinctiveness and superiority. Therefore, even if Koreans succeed in doing away with the notion of ethnic homogeneity, this will not automatically make Korean society tolerant of different cultures and values."

As for the xenophobia or nationalism tag, Blogger made tags available only three years after starting the blog, which made it a time consuming process to go back and put tags on hundreds of old posts; the less (and broader) the categories, the easier it was.

Brian:
Thanks for posting that. I may add a few more to the post that I just found. There still only seems to be one that has 'uncle sam' poisoning children, something that Myers would have no doubt found interesting, seeing as in his first book he translated Han Sorya's "The Jackals," the tale of American missionaries who inject a Korean boy with germs to kill him. From the Baby Riots to The Jackals to the protests in 2002 and 2008 to foreign English teachers being described as 'especially potential child molesters,' the meme in Korea of (white) foreigners targeting their children seems to be an enduring one.

Hi Matt, I started writing a comment to this post, but it turned into a mega response, which can be found at: http://asadalthought.wordpress.com/2010/05/31/protest-and-bad-government/

If you get the time, please have a quick read.

There's a couple of comments I'd like to make on your posters here. My comments will make more sense if you've already read my post, though.

The "I believe" poster is in reference to the fact that Lee Myung-bak has taken to using the phrase "믿습니까?" in his speeches, meaning, "do you believe?" This is because he's one of those Christian ultras, but it's become excellent fodder for mockery. This poster, therefore, is essentially implying that LMB just does the bidding of George Bush - it's more in anger at the government than at America.

The next one is the same. Yes, it's ostensibly about American beef having mad cow disease, which is obviously bollocks, but the text is supposed to be the message of the Korean government: again, it's saying that the government is acting against the best interests of the people. The general premise of it may be completely wrong, but the anger is directed more at the government than America or its beef. It just doesn't look that way to non-Korean speakers.

Thanks for the good post, it was clearly thought provoking, and it's good to see Myers beginning to crop up.

I think Mr Myers should already be aware of what I'm about to write, so perhaps I could be misinterpreting his words. If so, I apologise.

Myers was quoted in the post as saying, “Students in my classes tend to refer to the sinking as an ‘accident.’” I think this is a misrepresentation of what the students were trying to say. It all comes down to the Korean translation of the word ‘accident.’

I have heard my adult students refer to murders and violent crimes as ‘accidents’ enough times to suspect that there is some kind of widespread mistranslation at work.

Just like students refer to being ‘embarrassed’ on their wedding day, I think it's a case of either bad dictionary translation, a bad habit picked up from early English lessons, or an assumption that the word has all the same meanings as the Korean equivalent.

What I mean is, the learner takes the foreign (English) word and uses it as they would their own (Korean) one. This leads to inappropriate uses of some words – even in fairly advanced second language users.

A search of my (‘e4U YBM Si-Sa’) dictionary turned up a possible answer for the problem with ‘accident’:

My Korean is not great, so I’m open to being corrected by someone with greater ability. But it seems clear how the meanings of the Korean words differ the English ones, and how easy it could be for a learner to misuse them.

I know it's only a minor part of the quote, but anyone who has taught English in Korea is probably already aware of this kind of problem and shouldn’t be using a vocabulary mistake as evidence of the prevailing opinion of a group of students.

In the last paragraph, I should have said, "Anyone who has taught in English in Korea..."

And also, I should have said that anyone with such a good understanding of the Korean language should have picked up on the mistake.

Unless, of course, and as I already mentioned, he was aware of the mistake, queried it, and made sure that the students really did 'tend to refer to the sinking as an accident.'

I can't be sure, but seeing as Myers did the research for two books using Korean-language sources, I'd imagine he'd be aware of possible awkward translations.

I normally steer clear of the New York times, so thank you for bringing this article to my attention.

For those who are in Korea, how much of what Myers claims is true? What seems to be the overall public "feeling" about the Cheonan?

I'm still sceptical that the North was involved, despite the markings on the torpedo and the supposed clues linking the torpedo to a factory in the south of Pyongyang.

Some of my Korean colleagues have begun to doubt involvement by the Korean government and I'm inclined to agree.

God knows who caused the 'accident' but the US seem intent on aggravating the situation further.