Last year I posted about 2011 drug crime statistics, which, for foreigners, saw a massive drop to 295 from 858 in 2010. Despite this drop, last year the Ministry of Justice decided to expand the drug tests for E-2 visas to non-professional Employment (E-9), ship crew employment (E-10), or Working Visit (H-2) visas - about half a million people. Not that I would suggest that statistics guide policy making in any way - who needs statistics when it's simply well known that 'foreign drug crime is increasing'? One reason for this belief may be the fact that the media did not choose to report this decrease last year.

As for drug crimes by foreigners, this year there were 359 arrests, a 21.7% increase from 295 arrests last year (though the report (below) says it's a 38.6% increase, which makes you wonder about the basic math skills of those compiling the report).

Here are the arrests of foreigners for drug crimes over the past 12 years: 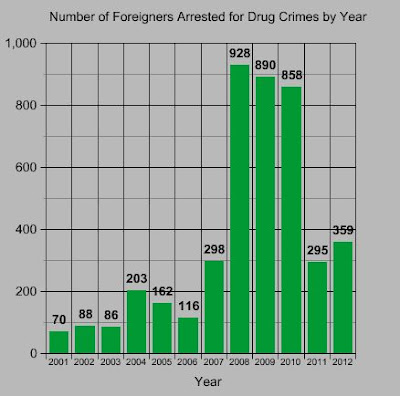 Here is a breakdown of arrests by nationality:


The top four basically remained the same, with the US and China switching places this year. Here are last year's statistics:

But it gets better. If we look at the 2011 statistics - the ones available to policy makers before they instituted drug tests for half a million foreign workers - we find for Koreans a similar 18.5 arrests per 100,000. And for foreigners? 21.1 arrests per 100,000. What a discrepancy. A simple look at statistics like these makes it clear that during the past two years foreigners have not committed drug crimes at a rate significantly higher than Koreans. In other words, there is no justification for these tests. Unfortunately, statistics such as these don't compare to the volume of media tales of 'growing foreign drug crime,' or to the xenophobic trope of Korea being 'defenseless' in the face of the foreign onslaught. It is these, along with a desire to exercise sovereignty over the foreigners within its borders - something always portrayed as impossible regarding the US military in the past due to SOFA - which is driving these unnecessary and wasteful tests.
Posted by matt at 9:03 PM