New crime stats for teachers, both Korean and foreign

Among native speaking assistant English teachers placed in elementary, middle and high schools nationwide, 15 have committed crimes over the past 3 years.

According to material submitted by the Ministry of Education, Science and Technology to National Assembly Education, Science and Technology committee member  Rep. Lee Hak-jae (Saenuri party) during the parliamentary audit, from 2010 to June 2012 15 native speaking assistant English teachers were punished for various crimes, it was announced on October 4.

I would imagine that single sex crime to be the teacher who fled from Daegu in 2010 and was extradited back to Korea in April before being sentenced to 4 years in prison in September. This story was reported by three other outlets, with SBS adding this cute little photo: 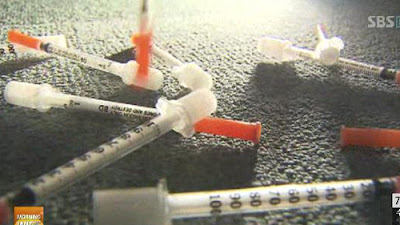 The reason for these statistics coming out is because 'tis the season for parliamentary audits of government ministries. Here's another article from Yonhap, also published yesterday:


Rep. Kim Sang-hui: "65% of teachers with sex crimes on record continue to work"

It's come to light that more than 6 out of 10 teachers who have committed sex crimes are still in classrooms.

In particular, of 56 teachers who committed sex crimes against minors such as students, 20 faced disciplinary action such as suspensions, pay cuts or reprimands.

It was also found that among those who faced disciplinary action, 9 received pay cuts or reprimands when, in the case of those who commit sex crimes against minors, the lowest punishment is "suspension," in violation of regulations regarding displinary action against public education personnel.

Of 18 teachers caught for prostitution, they all received disciplinary action such as reprimands or pay cuts except for one who was sentenced to two years' imprisonment.

Rep. Kim insisted that, "In order to protect our children, we should strip soul-destroying, inhumane criminals who commit sexual violence against minors of their teaching qualifications, not wink at the problem with disciplinary measures."

It says that by region, Seoul had the most sex crimes committed by teachers (25), Gyeonggi-do and Incheon each had 15, Jeollabuk-do, 13, Jeollanam-do, 12, Gyeongsangbuk-do, Gyeongsangnam-do and Gangwon-do each had  9, Gwangju, 8, Chungcheongnam-do and Daegu each had 7, Daejeon and Busan each had 4, Chungcheongbuk-do and Ulsan each had 3, and Jeju had 2. While this is not a lot compared to other occupations, the article said that, considering their mandate to educate children, something needs to be done to deal with this growing trend of sex crimes.

By type of crime, there were many cases of sexual harassment of other teachers and parents as well as molestation and sexual assault of underage students. One teacher in Jeollabuk-do sexually assaulted an elementary school student with an intellectual disability. There were also teachers caught buying sex in illegal massage parlors. A high school teacher in Seoul was fired for raping his relative, and an elementary school teacher in Gwangju was caught red-handed secretly photographing women's private parts with his cell phone camera while on the subway. Even worse, there was also a high school teacher who indecently assaulted a female police officer but was only charged with unlawful interference with an officer on duty.

I doubt few people would argue with that.

And yet in the fall of 2009 Rep. Choi Young hee (who authored a bill which was incorporated into the Hagwon law amendment last year) complained that teachers were being let off too easily for sex crimes, with nearly 60% getting only reprimands.


A total of 124 sexual crimes involving elementary and secondary school teachers were reported to the education authorities between 2006 and 2009. Among them, 47 involved prostitution, 43 were sexual harassment and five were rape cases. However, only eight teachers (6 percent) were given prison sentences, while 31 were not indicted and 28 received suspended sentences.

"It seems that teachers were exempt from punishment through out-of-court settlements with the parents of the victims," Rep Choi said. "Moreover, each city and provincial education offices, which were supposed to strictly punish those teachers, gave only verbal warnings. Only 21 teachers were fired for sexual violence."[...]


"We expect higher levels of ethics from teachers, but courts and education authorities are too merciful to problematic ones," Choi said.

Rep. Choi's comments in 2009 took place in the aftermath of the 'Nayoung incident,' which caused outrage at the lax sentence given to a man in his 50s  for brutally raping an 8 year old girl, so it's not like there wasn't a great deal of interest at the time (a time made more interesting by certain national assembly representatives who described foreign teachers as "especially potential child molesters"). And yet here we are, 3 years later, with still the same problem, with the majority of teachers who commit sex crimes still in classrooms. In fact, the statistics suggest it is a growing problem. A post about that problem in particular with have to wait for another day.
Posted by matt at 8:45 PM

And to think people were all fired up after the film Dogani/The Crucible/Silence came out.