On October 11 Yonhap, followed by NoCut News, first reported briefly that hundreds of foreign hagwon teachers in Seoul were to receive training as per the 2011 revision to the hagwon law. The Herald Gyeongje decided to spice up its report with a different title and an extra sentence in its opening paragraph:

Training is being carried out by the Seoul Metropolitan Office of Education (SMOE) to help its foreign hagwon instructors understand Korean society. There are also special lectures regarding social problems such as foreign instructors using drugs.

SMOE announced October 12th that on October 13 and 27 training would be held to help foreign instructors adapt to Korean culture at the Seoul Education Training Institute in Bangbae-dong and the Yeonji Church 100th Anniversary Memorial Hall in Jongno.

This will be the first training for foreign instructors held by SMOE.

1,673 Seoul area foreign hagwon instructors who entered the country for the first time after July 25 last year are participating.

The training will include foreign instructor-related issues such as understanding Korean culture and society's laws and system, laws that must be followed while they stay in Korea, and drugs.

An amendment to the hagwon law passed in July 2011 calls for foreign hagwon instructors to receive training from the education office or other education instutions more than once after entering the country.

An Asia Today article titled 'SMOE [holds] first training for foreign instructors' leaves the drug references out of its title and opening paragraph, but adds this quotation:


Lifelong education head Yang Gi-hun said, "This will contribute to improving the quality of the instructors and prevent things like drug and sex crimes by making them aware of the differences between Korean culture [and their own]." 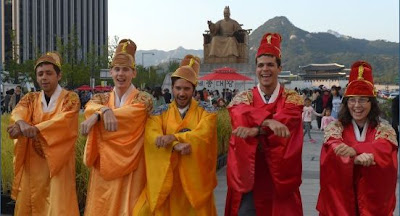 To be sure, nothing makes me want to dress up like Joseon-era royalty and 'do the horse dance' than being lectured about not injecting marijuana before class and how, despite all appearances, not molesting children and raping women is a unique part of Korean culture and a wonderful manifestation of 'jeong.' Not that anyone is saying that doing the horse dance was actually a part of these lectures.

It's not that giving a clear, sobering description of Korea's (lack of a) non-alcohol or tobacco-related drug culture, its drug laws, and the penalties for breaking them is necessarily a bad idea - it's a good one. Unfortunately, as the headline above suggests, it likely comes with a good dose of moral superiority and useless information (material I saw for one lecture years ago discussed the 'dangers of marijuana'), as well as ignorance of the fact that, though arrests of foreign teachers for drugs are higher than the Korean average, their 'drug crime wave' is more due to exaggeration by the media than an actual high number of arrests. (Note also that drug testing of foreign teachers has been expanded to half a million foreign workers in Korea after drug crimes by foreigners dropped by two thirds in 2011, showing how little policies aimed at foreigners in this regard have to do with actual statistics or facts.)

Here is what the amendment to the Hagwon Act said regarding the hagwon instructor culture classes:


This part of the Hagwon Law amendment bill (which was a collection of several already existing but as yet unpassed bills) came from a bill tabled by Rep. Jo Jeon-hyeok in 2009. As KBS (via Brian) put it at the time, Rep. Jo


said most foreign teachers in the nation do not have enough of an understanding about Korea’s culture and practices. He said the revisions are aimed at raising the quality of the nation’s English education programs by mandating that foreign teachers have better knowledge of Korea.


I was curious, though, whether this knowledge was explicitly intended to include drug or sex crime education (the latter which we've seen before). As it turns out, on November 26, 2009, the Kukmin Ilbo talked to Rep. Jo about his plan, which he said would "help improve not just the satisfaction of the parents but also the image of the country."

Rep. Jo's plan (much like Choi Young-hee's) was to amend the school and hagwon laws (though only the hagwon law was amended). This was, he said, because foreign teachers or instructors didn't know the realties of Korea and had a hard time adapting and were unable to carry out appropriate lectures for students.

Rep. Jo pointed out that "In particular, they have aroused public criticism through deviant behavior such as smoking drugs." He also said there were 6,900 native speakers in schools and 55,000 in hagwons, making one wonder who was doing the smoking. [Perhaps 15,000 in hagwons might be correct, though it's not the first time politicians have screwed up statistics.]

Rep. Jo did however feel that the training system could "have the effect of improving the national brand." Getting the numbers wrong again (speaking of 60,000 foreigners), he does say that by helping these foreigners adapt to Korean life they could help promote the traditions and culture of Korea more effectively on a smaller budget than the Korea National Tourism Organization. He also notes that most foreign teachers and instructors are young and educated and are very active in posting on foreign websites and blogs and should be able to spread a good image of Korea.

I'd say he's absolutely right, and that teaching here provides an opportunity for westerners to learn about Korea and communicate their (hopefully positive) experiences to audiences in their home countries in a way that Korean government propaganda could never hope to do. Rep. Jo certainly deserves credit for being one of the few people who seems to get this (or has at least articulated it - see here for another example).

It's just that, why would people want to 'do the horse dance' if they're condescendingly being told that they shouldn't do drugs and molest children because Korea's culture is different than their own? And conversely, why would the Korean government and politicians want people that they've helped paint as unqualified, drug-addicted, child molesting sex criminals doing PR for them?

One certainly hopes it's not because they don't believe any of it themselves and simply perpetuate such stereotypes in order to allow them to pass regulations against an easy target in the hope of being made to look 'effective' in the eyes of voters. I mean, it's not like the MOE ever said anything like, "The continuation [of HIV testing for NSETs] does not mean the government regards foreign teachers to be HIV positive or have the potential of transmission ― it is just intended to assure the parents." Right?

Anyways, has anyone been to any of these training sessions? I'd be curious to learn more about them.
Posted by matt at 2:53 PM

And the grand paradox continues: Korean culture is the most specialist of all cultures, and we must bring thousands of ajumma-kicking, drug-snorting barbarians to our shores to teach English or else every mother in the country will be angry with us.

It seems like the stuff they come up with to keep the English teachers off pot is more wacky than the stuff they'd be doing if they were on it!