I was walking through Hongdae Monday night and saw this procession: 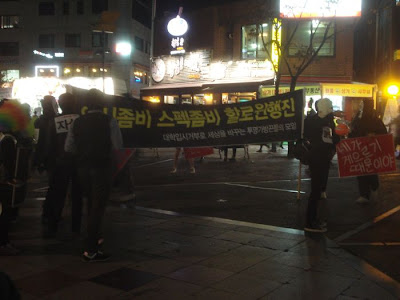 The banner reads "University entrance exam zombie, spec zombie Halloween march," with the text below reading "대학입시거부로 세상을 바꾸는 투명가방끈들의 모임", or "The invisible 'schoolbag strap' group to change the world by rejecting the university entrance exam." 'Spec' refers to the combined educational background, grades and TOEIC scores of people looking for jobs, while the length of one's 'schoolbag strap' refers to the amount of education one has - PhDs have the longest 'straps', while high school graduates have the shortest. Those who haven't graduated high school, such as the students taking part in the protest, would have no 'strap', hence its 'invisibility.' 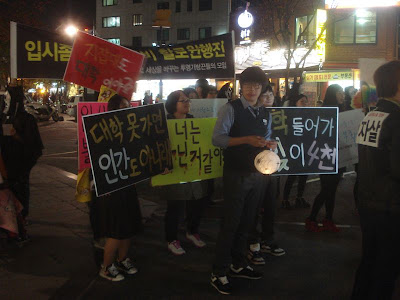 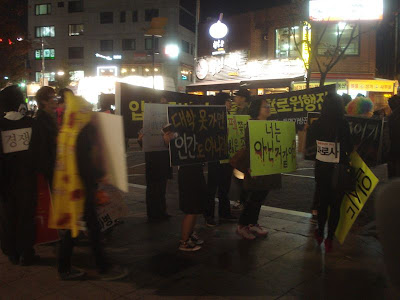 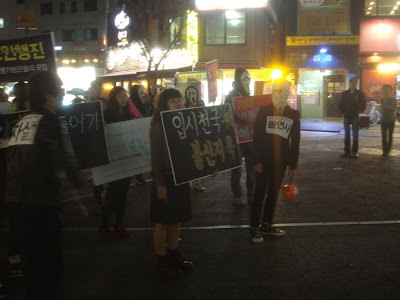 Those taking part in the march carried placards with messages such as:

The zombies also had signs, often on their backs, detailing the reason for their death and zombiehood:

It’s because of my laziness
Suicide
Competition
Sudden death.

Rather clever, I thought. One participant handed me this small flyer: 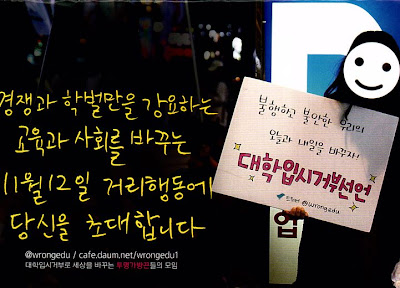 An invitation for you to [take part in] the November 12 street action to change a society and education (system) which imposes competition and [emphasis on] educational background.

Let’s change our unhappy and anxious today and tomorrow!
The declaration of refusal of the university entrance exam

On the back it reads in part, "In a society that demands we constantly aim for a higher score, a better university, a better job, a better educational background and greater status, we are unhappy and anxious."

I don't have time to translate more, but their site, with its declaration of refusal of the university entrance exam, is here.
Posted by matt at 10:35 AM

wow, thanks for the translations. I saw these guys too, but I didn't know what the signs said.