Free screening of 63 Years On 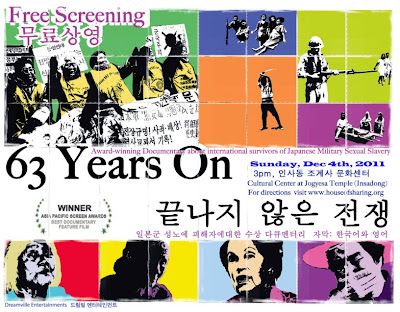 I was asked to pass on this information:

The House of Sharing’s International Outreach Team will hold a FREE Documentary screening of “63 Years On”, the story of ‘Comfort women’ at Jogyesa Temple Theatre on Sunday, December 4th 2011. The film is in multiple languages with English subtitles. There will be an introductory speaker and group discussion after the film.

Date: Sunday December 4th, 2011 Time: 2:00pm – 4:00pm Film duration: 63 min.
Where: Jogyesa Temple Theatre
Jogyesa Temple is located in Jongno, on the street behind Insa-dong. You can walk there in a short time from Jonggak Station, or it's also accessible from Anguk Station (Exit 6).

This is an opportunity for both the Korean and International communities to further engage with the ‘Comfort women’ issue and to support the continuing fight for justice. A brief Question & Answer session will take place after the film, an opportunity for those who wish to share their thoughts on the film and ask any questions to members of the House of Sharing’s International Outreach Team.

In this film, award-winning Korean director Kim Dong Won presents the harrowing experiences of 5 international survivors of Japanese Military Sexual Slavery during World War II. The very personal telling of their experiences is supported by excellent research and archival footage to create a powerfully honest, determined, and often heartbreaking documentary.

I still have yet to see this, but other films I've seen by Kim Dong Won have been well worth watching.
Posted by matt at 2:00 PM